A Poem about the Saudi “Women in Black” 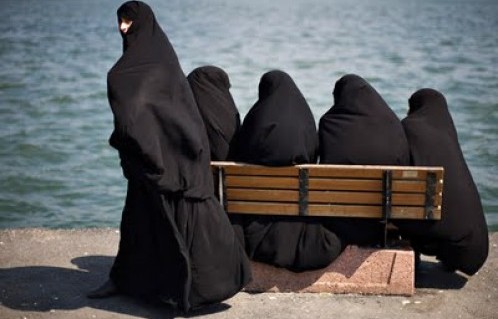 Hala is a young Saudi woman, intelligent, progressive, and well-educated, who writes about women’s issues in Saudi Arabia. She is optimistic about the future and strives for changes in the roles that Saudi women play in Saudi society. I was impressed by this poem she wrote and wanted to share it with you. You can find out more about Hala by reading this interview she did on American Bedu’s blog a while back.

Hala’s introduction to her poem, “The Women in Black” :

“When I was a little girl I was inspired by a stranger, an anonymous woman who showed up once in Gazzaz shop in Jeddah. My mother used to shop frequently there and to take us along, that young woman who had an air of confidence, and who was completely on her own enjoying herself without a fear of being watched or harrased was such an inspiration for me… Long before I can put the exact words of autonomy and self sufficiency to an independent woman, that strange woman embodied the meaning… I dedicate the following poem to all the great women of Saudi Arabia who never fail to show strength and perseverance no matter how much they face an unmet needs… This poem was recited at the Cyber activism women bloggers conference in Copenhagen” …

The Women in Black

Once upon a time, in a busy shop

In the land of tribes and ancient civilizations

Grown-up women with shrouds of black

Hidden and silent… in isolation

They wandered around in simulation

When a single woman appeared, suddenly, in the shop

Yet, she walked with determination

Not cautious, fearful, or covered-up

The woman moved as a distinct population

She seemed to own the world

She was … such an inspiration…

Why would she be on her own? The little girl wondered?

Wasn’t she afraid from reprimands or accusations?

Looking that pretty in embroidered black,

Defying the norms as if in a celebration

Who gave her the money that she’s spending

Without a second thought or a hesitation?

Was she really confident and strong as she seemed?

Or is it the little girl’s wishful imagination????

In that little girl’s life

Most women shared a specific combination

Emotions were not revealed, opinions were suppressed

With lots of reservations

They held on to their black tightly

Least someone recognize their identifications

Watching for proofs of condemnation

So the women in black kept their covers tight

Yet a single woman in black dared to show her face

Visible without a mask, in obvious relaxation!!

The little girl knew that something/ someone

Must explain that awkward observation

Of that visible woman in black

The little girl grows in fascination

More visible women are out there

Raising their voices in frustration

They no longer accept second-places

They no-longer sat in resignation

The women in black want their rights

Minimum marital age or right of self- representation

Commenting on international treaties for women,

They are loud and visible

In a constant flow of information

They build networks and constituencies

No longer helpless or maintained

As prisoners of infinite duration…

Yes, we are in a constant fear of social backlash

But the power of words defeats organizations

The little girl recalls the single woman in black…

Whenever she feels a hesitation…

Beautiful and powerful in her own way…

A woman, who defeats stagnation…

We will not be deprived

We are a different generation….

And if countries can be flipped over and start anew

In search of liberation

We, too, the women in black

Can exceed our own expectations…

2 Responses to A Poem about the Saudi “Women in Black”