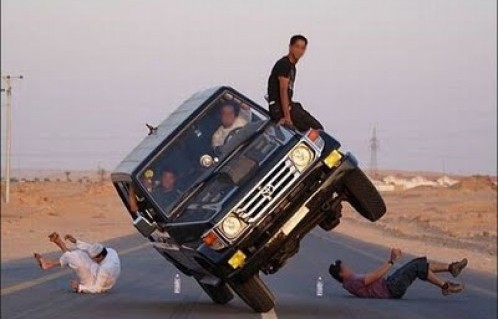 With all the recent media coverage of women not being permitted to drive in a certain Middle Eastern country, I got thinking – what would it be like if men weren’t allowed to drive?

I came to one simple conclusion: we women would be much safer.

Think about the dangers of male drivers. Men have higher rates of speeding, they are involved in more accidents and cause more deaths on the road. Their high-testosterone brains ignite higher incidences of road rage. They are notorious tailgaters, failing to observe any measure of safe stopping distance. And, they can’t even be bothered to ask directions when lost. The solution is simple: bar them from driving.

If men start to whine and whinge about their “rights” being infringed, then just to stop their “waagh waagh waagh” moaning, consider this modest proposal.

Driving lanes could be segregated by gender. Or, better still, we introduce gender-segregated streets, some for men, and some for women. This way, we women would not have to look at the horror of their balding heads, especially those of middle-aged drivers in convertibles, their toupees or comb-overs flapping in the wind.

By limiting their access to certain streets, we would also be safe from their high-speed antics and reckless driving, which, due to their biological design, they are compelled to engage in. They can’t help it, poor things. Have petrol, will accelerate.

Where there are roads that men insist they need access to (although what kind of roads these could be, I just don’t know – perhaps ones with football stadiums on them?), a timetable could be devised with restricted hours for men to use them at essential times only. Of course, these hours would exclude the times that the men ought to be at home putting out the rubbish, fixing shelves or cleaning out the drains.

Segregated lanes, limited access and a timetable could be combined into a new road system based on Gender Prioritisation and Separation (GPS).

Male drivers are genetically predisposed to road rage, and if we are to permit them to drive, then we must warn them they will only have themselves to blame if they are attacked in any altercation that ensues. Not driving is for their own good, so if they choose to ignore this, they must bear the consequences.

Of course, we must ensure that these male drivers are not a source of temptation for women. And even more importantly we must take steps to prevent them from driving willy-nilly around on frivolous activities like collecting the children from school, caring for sick relatives or attending places of employment to earn wages to buy food.

In fact, now that I think about it, these tasks are entirely trivial and the men can manage them quite comfortably by hiring a female chauffeur to drive them around. If they are in the back, then they won’t be able to use their wiles to tempt the poor female driver.

When it comes down to it, I am of the view that men don’t really want to drive, but they think it’s fashionable to say that they do. I mean, why would they bother with the hassle of parking? Why get hot under the collar trying to navigate traffic?

In short, men are simply not designed to drive. We tell them and tell them that driving is not good for them, and it’s not good for society. But that’s typical of men isn’t it: they just won’t listen.

One Response to A Modest Proposal: Let’s Ban Male Drivers