A ‘Compelling’ Vision of Cairo ‘In All Its Multiplicities’ 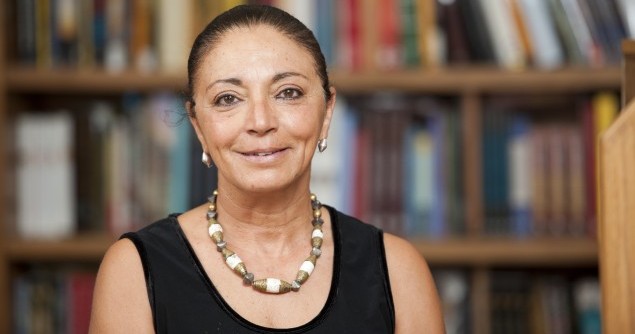 “His heart had been snatched from him… where to? … He wanted to find someone to warm this small part of his chest, that little cage between the ribs, a small part that needed to be filled with tenderness. But can tenderness be had from Cairo, the ogress?”

So wonders the narrator in Ismail Wali al-Din’s Hammam al-Malatili, one of the excerpts from Samia Mehrez’s collection The Literary Atlas of Cairo: One Hundred Years on the Streets of the City. Mehrez is a professor of Modern Arabic Literature and founding Director of the Center for Translation Studies at the American University in Cairo, and edited, introduced and partially translated the two-volume Atlas. “Each and every text that I included in the atlas imparts one impression of the city, one level of its energy, one aspect of its life, of being in it, moving in it, but also reading it, discovering it, and imagining it,” she said in an interview with World Literature Today.

Mehrez’s book paints a richly dense portrait of Cairo in all of its multiplicities. The excerpts travel across history, neighborhoods, social classes, and even language itself. From the early days of the Fatmid period to the dystopic future in Ahmed Khaled Tawfik’s Utopia, from the garbage-collector’s slum in Moqattam to the gardens of the early twentieth century Shubra Palace, and from Naguib Mahfouz’s flowing prose to Ahmed Alaidy’s coarse, choppy slang, the collection is vast. It is the diversity in language that lends richness to the collection: “from the Babel-like linguistic world of the palaces, to the chic francophone of the beginning of the century, to the Anglicizations of the sixties, to the Islamization/globalization of the eighties and nineties,”  the language within the texts is dense and varied.

Even within a single excerpt, national history blends with a community’s oral history mixed with a dosage of humor, as in Ibrahim Aslan’s The Heron. A voice is caught on the mosque’s speakers in Midan Kit Kat recalling the neighborhood’s claim to fame during French occupation: “It was even established in history books that when the French army came from Umm Dinar to set up camp nearby and do battle with Murad Pasha of Murad Street fame, they ate the local cantaloupe. And it’s written somewhere that when Napoleon saw his army afflicted with diarrhea, he ordered them not to eat the local melons. They could eat cantaloupe from anywhere but Imbaba,” the voice chuckles, before discovering that his voice had been broadcast across the entire quarter.

A sense of nostalgia is often present, whether the narrator is reminiscing about a childhood in Belle Époque downtown or amongst the villas of Garden City. Even inanimate objects long for the golden days of the past: the narrator of Muhammad al-Fakharani’s An Interval for Bewilderment is the statue of Ramses, nostalgic for his place in front of Misr Railway station after being relocated to the Grand Egyptian Museum in one of Cairo’s satellite cities. Mehrez herself can likely relate to the statue’s plight; one of the impetuses for creating the collection was the American University in Cairo’s relocation to the satellite city of New Cairo.

At times, the collection is as sprawling as the city itself. Readers familiar with the city will be rewarded with authors’ visions of known locations—from landmarks like al-Azhar Mosque to well trodden street corners and back alleys. Yet it is difficult to imagine that readers unfamiliar with the geography or history of the city could make much sense of the collection, or emerge with even a vague idea of what distinguishes one area or time period from another.

In the end, perhaps the true value of the collection is that it creates not only a map of the city but also a map of the writers themselves. Mehrez writes that “geography is ideology: as each one of the writers records the present and past of a given neighborhood or area, his or her economic, social, political, and aesthetic biases are written into the map they each produce” (27). Ultimately, this creates a literary layering effect, where writers’ fictional worlds become the foundation for the next generation of authors. “This is the police station that Naguib Mahfouz described in his Cairo Trilogy,” says a character in Mahmoud al-Wardani’s Heads Ripe for Plucking, while the narrator in Ahmed Mourad’s Vertigo is characterized by “very weak eyesight that would have won the complete sympathy of Taha Hussein himself” (201). The collection’s success is truly based on that layered tradition: contemporary Egyptian fiction is very often set against the backdrop of Cairo, and it is hard to imagine this project being as compelling elsewhere.

Many representations of Egypt created just before the 2011 revolution seem trapped in a particular moment, obsolete shortly after being released. The second volume of the collection, The Literary Life of Cairo: One Hundred Years in the Heart of the City, was published in March 2011, just a month after the January 25th uprising that transported images of Cairo’s downtown onto television screens worldwide. Within the pages of The Literary Atlas a cab driver complains about corruption as he passes Central Security Forces trucks in Midan al-Tahrir; Miral al-Tahawy recounts exchanging volleys of rocks with the Central Security Forces and falling in love with a poet penning protest chants. The collection serves as a backdrop to both the past and events to come. As history continues to be written on the streets of Cairo and recorded by its authors, The Literary Atlas proves a compelling and enduring collection.

This essay also appeared, in a slightly different form, at The Arab Review.

Elisabeth Jaquette is a graduate student in Anthropology at Columbia University and a CASA (Center for Arabic Study Abroad) fellow at the American University in Cairo. She has lived in Cairo since 2007, where she contributes occasionally to the blog ArabLit in English, runs an Arabic-English book club and tweets at @lissiejaquette.