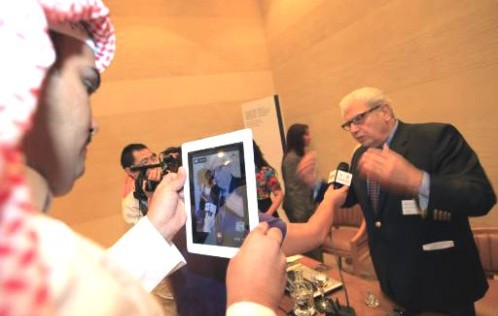 The Independent Commission of Enquiry’s report into the events of February and March of this year is due to be published. In advance of the report’s release, the Government has already indicated that it will make a number of reforms based on its understanding of the findings – torture outlawed, an independent Human Rights watchdog – as described in today’s Gulf Daily News. It knows that the report will highlight abuses of human rights by officials, and says that it is prepared to prosecute those responsible.

Meanwhile the world media once again turns its attention to Bahrain after months of absence. Star journalists are arriving in their droves – either from their safe havens in London or New York, or on rest and recreation from more rigorous assignments in Libya, Egypt or the Syrian border.

Over the past few months those of us non-Bahrainis who have a stake in Bahrain’s future – people who work, own businesses and bring up their families here – have lived through an uneasy eight months since the forces of the Peninsula Shield intervened to help bring an end to acts of open insurrection that threatened the authority of the Government.

Away from the glare of international media attention, the local media has tried to make the case that it is “business as usual” in Bahrain. In that message it has been supported by influential business groups  – notably the British Business Forum.

The Economic Development Board has carried out road shows across Europe promoting the country’s liberal business environment and encouraging bilateral investment. Senior Government officials have been making the case for Bahrain in numerous foreign visits. As they should.

Leaving aside the social damage caused by the unrest, the economic harm has been substantial, and it affects ordinary people across the island. I visited the souk the other night at around 9pm – a time when last year it would have been thronging with people. It was virtually empty. Half the shops were closed. One trader I spoke to told me that times were very hard.

In hot spots around the island, there has been a constant theme of low-level attrition against the security forces. Small groups of youngsters block roads with oil and burning garbage, and throw rocks and other projectiles at the intervening police. Many of us have smelt tear gas for the first time.

Every weekend over the past couple of months, a few hundred yards from where I live, we hear sound grenades echoing across the neighbourhood, police sirens and loudspeaker warnings. The other night, a sixteen-year-old boy died after being crushed against a wall by a police car that had apparently veered out of control on a patch of oil poured on the street by protesters. Different versions of the incident abound, but I see no reason to disbelieve the official one. At such a sensitive time, yet another death brings no benefit to the security forces or the Government.

It is counterproductive for anyone to claim that “normality” has returned to Bahrain. On the positive side, many of the Saudis who used to flock to the island for weekends have returned. This has been good for the hotels, malls and traders in the areas that they frequent. Events that were thin on the ground in the aftermath of the crackdown have started to return – the Bahrain Boat Show, for example  takes place this weekend. Bahrain continues to be a convenient jumping-off point for businesses that are looking to penetrate neighbouring markets – particularly Saudi Arabia, a few miles across the causeway.

But the country lost much revenue this year because of the cancellation of high-profile events such as the Formula One Grand Prix, as well as conferences that bring large numbers of delegates. Cruise liners, that had started to stop regularly on Middle East cruises, no longer visit the island. Although government investment in infrastructure continues, and there is continual construction by the private sector – apartment blocks, hotels and offices – life for small and medium business that are not able to benefit from government contracts continues to be tough.

So difficult economic conditions create further discontent, and it will be hard to halt the downward spiral.

This is why the Commission report is so important for the Government. It hopes that the Commission findings, and follow-up measures, will draw a line under the unhappy events of Spring 2011. It is undoubtedly calculating that not everybody will be satisfied by the findings. Some in the Shia community are already naming tomorrow as a Black Day. There will also be government officials unhappy at the finger of blame being pointed at them.

But I do believe that now is the time for all parties to pause and reflect. It will take years for the wounds to heal. But if elements of the opposition continue to mount what is effectively a long-term campaign of social and economic insurgency, the effects will damage Bahrainis of all sects and political persuasions without any guarantees of the long-term success of their efforts.

Because the reality is that Bahrain is a border state sandwiched between two competing regional powers – Iran and Saudi Arabia. Saudi Arabia, as long as it has power and influence, will never accept the establishment of a Shia-dominated Islamic Republic on the island. Yes, there is scope for reforms that will improve the lives of citizens who feel that they are second-class. But that basic political reality will not change.

Those who protested on a non-ideological basis in February and March can achieve many of their aims within that reality. Some might take time to achieve. Others, who are motivated and inspired by the neighbouring theocracy, will be content to let Bahrain degrade. Any destabilising influence Iran can exert on its Gulf neighbours will keep Saudi Arabia and the rest of the GCC on the back foot. I have no idea as to the true extent of the influence being exerted by Iran and proxies in Iraq on the discontented in Bahrain. But Iranian influence will surely continue to be a factor for as long as the regime in Tehran continues with its current foreign and domestic policies.

Leaving aside all political complexities, I believe that the Government should have the chance to right wrongs where it can, and to put measures in place to ensure that wrongs which cannot be righted never recur. And I look forward to a new era of less spin, denial and manipulation. It is unrealistic to expect that these black arts will entirely disappear from Bahrain any more than in any other country – my own, Britain, included. But increased freedom of expression of all shades of opinion can only be a positive development.

If the Commission delivers lessons for all parties to learn and act upon, that will be an excellent first step. The rest will be down to time, events and people of good will.

As I have said many times before, my thoughts are with the delightful people of Bahrain. They deserve better times.

One Response to 23rd November: A Red Letter Day for Bahrain