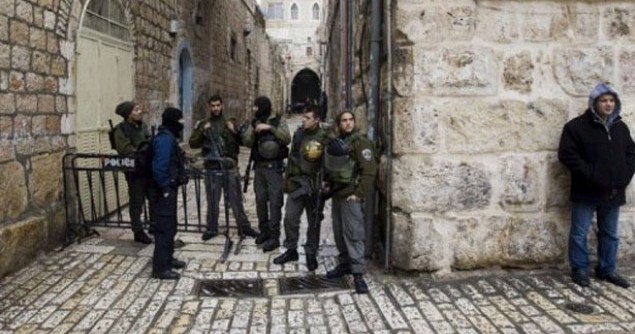 On Friday four Palestinian teenagers were mobbed by 50 Israelis of similar age who were prowling the streets of Jerusalem shouting “Death to Arabs” and “Arabs, Arabs,” looking for Palestinians to beat. Disturbingly, during the Zion Square attack Israeli authorities said around 100 witnesses stood by and watched as one victim, Jamal Julani, was kicked as he laid on the ground unconscious. The violence only stopped after police intervened.

Nir Hasson detailed the assault in Haaretz through quotes from a witness’ Facebook page:

‘When one of the Palestinian youths fell to the floor, the youths continued to hit him in the head, he lost consciousness, his eyes rolled, his angled head twitched, and then those who were kicking him fled and the rest gathered in a circle around, with some still shouting with hate in their eyes.’

‘When two volunteers [from local charities] went into the circle, they tried to perform CPR and the mass of youths standing around started to say resentfully that we are resuscitating an Arab, and when they passed near us and saw that the rest of the volunteers were shocked, they asked why we were so in shock, he is an Arab. When we returned to the area after some time had passed, and the site was marked as a murder scene, and police were there with the cousin of the victim who tried to reenact what happened, two youths stood there who did not understand why we wanted to give a bottle of water to the cousin of the victim who was transferred to hospital in critical condition, he is an Arab, and they don’t need to walk around in the center of the city, and they deserve it, because this way they will finally be afraid,’ she added.

Haaretz then reported on Sunday the Israel police escalated their initial assessment of a “brawl” to a “lynching.” In addition, four additional suspects, between the ages of 13 and 15, were arrested.

The mob attack came just a day after a firebomb was hurled at a taxi transporting a Palestinian family of six, including two children, and weeks after settlers planted a car bomb in a Palestinian village near Ramallah. The explosions come in the context of the highest rates of settler violence in the past five years, according to a report by the Jerusalem Fund. In 2011 alone, there were 10 “price tag,” arson attacks on Palestinians.

Noting the increase in Jewish Israeli violence against non-Jews, the Institute for Middle East Understanding (IMEU) published a fact-sheet linking the attempted lynching to the recent wave of mob violence against African migrants:

‘In May 2012, a wave of anti-African racism and violence, including physical assaults and a string of arson attacks, hit Tel Aviv and other parts of Israel, fueled by inflammatory statements made about asylum seekers by Israeli politicians including Prime Minister Benjamin Netanyahu and Interior Minister Eli Yishai.’

IMEU’s report, titled “A Culture of Impunity: Violence Against Non-Jews in Israel & the Occupied Territories,” points to an unspoken government acceptance of settler attacks on Palestinians as some of the incitement originated from members of the Israeli Knesset and state-funded rabbinical authorities. Settler rabbi, Dov Lior is described as a patron radical whose:

‘salary is paid by the Israeli government told a conference that Arabs are ‘wolves,’ ‘savages,’ and ‘evil camel riders.’ Earlier in 2011, he warned Jewish women against marrying non-Jewish women, stating: ‘Gentile sperm leads to barbaric offspring.’

Friday’s mob violence seem to indicate the Israeli hard-right’s incendiary political discourse has paved the way for extremist Jewish violence, all will the tacit support of the state of Israel.