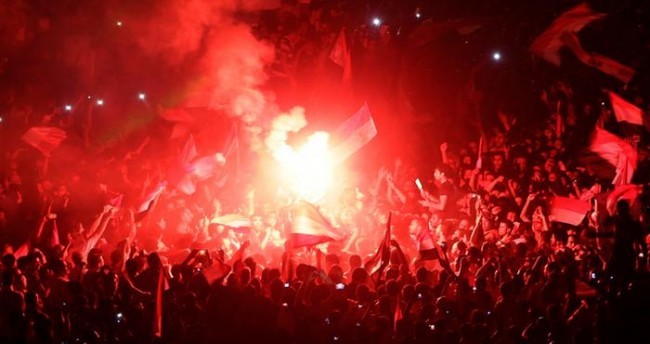 Peace may not be the first word that comes to mind when thinking of Cairo these days. The Egyptian political landscape now appears more polarised than ever, and last week’s renewed clashes again highlighted divisiveness between supporters and opponents of the Muslim Brotherhood.

But Cairo is a city where anything can happen.

This year’s International Day of Peace on 21 September showed another side of Cairo, and was a step towards a more inclusive Egypt based on fairness and mutual respect.

Beyond the tensions stemming from the transition to democracy, many Egyptians have embarked on a path to peace, from tech-savvy young activists networking through social media to men and women of older generations discussing politics or joining grassroots campaigns for the first time.

On 21 September, for the third consecutive year, MasterPeace, an international grassroots peacebuilding initiative involving people in over 40 different countries, celebrated the International Day of Peace in Cairo with an event called the Street Art Festival. Almost four thousand people participated and enjoyed a full day of graffiti art, music and workshops. Egyptians of all different backgrounds and age groups joined in.

People seemed keener than ever to get together and build communities. “Nobody displayed any biased political signs; everybody came to celebrate Egypt together, regardless of the party they support,” says Raghda El-Halawany, a project manager for MasterPeace in Cairo.

“People weren’t afraid to congregate in the streets, despite the allegedly dangerous situation described in the news,” adds El-Halawany, “and the event was held without a single incident.”

Workshops held during the event tackled themes such as sexual harassment, social tolerance and interfaith dialogue, as well as the art of debate. Other topics related to how Egyptians can move their country forward, ranging from upcoming elections to how to include all political views and ideologies in the construction of a new Egypt.

Before the 25 January Revolution, such initiatives would not have attracted such enthusiastic participation considering issues like sexual harassment were taboo. Even concepts like interfaith dialogue were previously not as widely discussed as they were during the event.

The event culminated with Egyptians joining independent MasterPeace artists to cover a full wall with graffiti representing their unity.

Graffiti walls are a hallmark of the International Day of Peace in Egypt’s capital. In 2011, the first time it was held in Cairo, other wall-sized images were created, representing hope for a better future and peace with nature.

“No one has sabotaged the walls in these three years, although they are right on the street…People appreciate beauty and Egyptians loved having a nice, clean spot in the middle of our streets”, explains El-Halawany.

Such care for the public space and use of art as a form of social and political expression signal a growing momentum on the part of young Egyptians to build their nation.

After almost two years of political turmoil, weak governance and a devastated tourism industry, Muslims, Christians, liberals, those who want religion to play a role in politics and those who don’t are all still striving for political and economic stability.

Whatever ideological view one happens to hold, the 25 January revolution marked the beginning of a new civic-mindedness and sense of the state which is still being expressed during events like this one. To shape a truly democratic and pluralist society, Egyptians will need to continue to build on what unites them.

Randa Ghazy is a freelance journalist born and raised in Italy from Egyptian parents. She is the author of three novels.