Yemen’s Salih: The Elephant’s Still In the Room 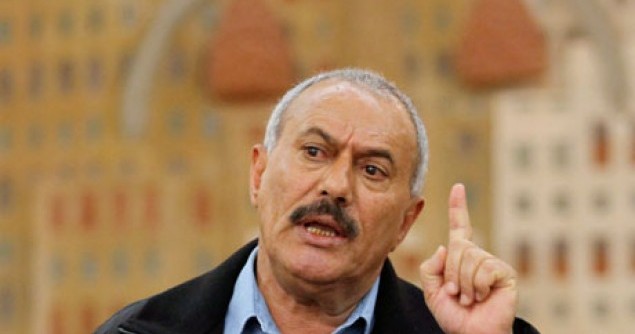 A little over six months ago, Ali Abdullah Salih finally resigned himself to the fact that he was no longer wanted by the people of Yemen or the international community as president-for-life in Yemen. But instead of taking his stashed away millions to exile in Saudi Arabia, which has open-armed several past dictators with Muslim names, or bribing a poor country to host him and his family, he remains in Yemen. I suspect when someone is in power for as long as Salih was, that delusion is the normal path. Perhaps he thinks that if things keep on getting worse (ignoring the fact that the problems are largely his own creation), Yemenis will bring him back. Perhaps he has heard those Iraqis who say things were better under Saddam? Perhaps, but his delusion contributes to the problem as long as he is living in Yemen.

Salih played the “dancing on the heads of snakes” game throughout his tenure at the head of the Yemeni state. He built a family-run state, allying himself with tribal powerbrokers like ShaykhAbdullah al-Ahmar, and shaping the military into a private army. Corruption was rampant and few Yemenis were fooled by the state-tun media myth of Salih as the father of his country. His triumph of uniting north and south was a ruse from the start, extending his control rather than actually caring to build a united country. But his downfall is largely due to backing the extremists, the Jihadis back from Afghanistan, those whose ideology he could never uproot for his own advantage. When his troops took over Aden in the 1994 civil war, Salih allowed northern zealots to raze religious shrines and demolish the one beer factory in the country. As the zealots shouted “Allahu Akbar” the guy in the presidential palace could only think of himself as the “akbar.” Building a monster mosque in the capital, not unlike Saddam’s architectural piety, could hardly disguise the fact that here was a man who worshipped himself. He was not the first to do so, is not alone in doing so, and will not be the last.

Granting amnesty to Salih made sense as a means to avert yet more civil strife. But as long as he remains in Yemen he is not only the elephant in the room, but a whole herd ready to wreak havoc. It is not just about Salih himself. He had so peopled the security and military that his ghost haunts the entire structure. The generals who turned against him did so after carrying out his crushing commands and not out of a sense that Salih’s policies were wrong. The transition government is struggling to undo decades of damage. A culture of corruption from the top is hard to overcome in months. The Yemeni people, especially those imbued with tribal communitarian values, are not the problem; but lack of jobs, lack of security and a dismal infrastructure are daunting obstacles to development.

There are calls for Salih to leave and for his wealth stolen from the Yemeni people to be given back to Yemen. He will certainly not leave on his own or for love of his country. The man who turned out not to be invincible has no desire to be invisible. And so the tragedy of a country raped by its former leader goes on.

One Response to Yemen’s Salih: The Elephant’s Still In the Room