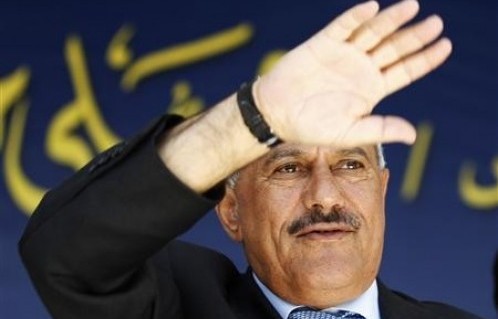 Last week Yemen’s “embattled” President Ali Abdullah Salih granted an interview to Time Magazine and The Washington Post. While not very enlightening, it does suggest a new sign of desperation. The interview transcript (in English translation of course) is online. He once again played the blame game, insisting that he has been willing all along to abide the GCC agreement and step down.

Then there is the last question. Dodging any direct answer to the official U.S. call for him to step down, he pulls what may be the most desperate part of the interview — talking directly to the American people. The message is one that should resonate with the Tea Partyers who still think President Obama is a Muslim(at least those too dumb to realize who Salih is]. Here is Ali Abdullah Salih, the good dictator who can rid his country of the evil al Qaeda terrorists. Here is the gist:

I want to ask you about Yemen and U.S. relations, which is important: On the day you returned to Yemen …
[Salih] This is the last question. (See a video on the uprisings in Yemen.)

On the day you returned to Yemen …
[Salih] The Yemeni-American relationship is good. In fact, it has not been affected during the past 33 years. And we have relationships with many political powers in Washington, whether they are from the Democratic Party or the Republican Party. There have been some differences during the last Gulf War because of the Yemeni stance, but then the Americans realized that we were right and that we were not just defending the Iraqi regime.

But the Americans …
And these were accusations by analysts, diplomats and so on that turned out not to be true.

But the U.S. has asked you to step down …
[Salih] I am addressing the American public. I want to ask a question: Are you still keeping your commitment in continuing the operations against the Taliban and al-Qaeda? If Washington is still with the international community in fighting the Taliban and al-Qaeda, who have disturbed the world peace. If yes, that will be good. But what we see is that we are pressurized by America and the international community to speed up the process of handing over power. And we know to where the power is going to go. It is going to al-Qaeda, which is directly and completely linked to the Muslim Brotherhood.

Déjà vu all over again, as Yogi said. It is the political canard that the enemy of your enemy is your friend. I suppose like Stalin at the end of World War II. But the hundreds of thousands of protesters on the streets belong neither to a nefarious branch calling itself Al Qaeda nor the Muslim Brotherhood. The young Yemeni protesters and other victims have mainly been there saying no to the continuing corruption, as bad as anything that ever occurred (and much worse actually) during the reign of Imam Ahmad. When they shout “Irhal ya Ali” they are not thinking “Ahlan wa-sahlan irhabi.”

My favorite response in the interview is the following. Note the long question and the quizzical response:

In recent days there has been heavy public criticism of you by General Ali Mohsen as well as the Ahmar clan. What is your response to this public criticism, and given the violence and mistrust that is unfolding, is it possible for all of you to remain in Yemen and work together?
[Salih] What kind of criticism?

The kind of criticism that Salih did not want to tell, but a different kind of time has already tolled. And, dear Ali, it’s tolled for you, even on a typically defunct Facebook page.