Yemen, the Reality: ‘It Ain’t Over ‘Til it’s Over’ 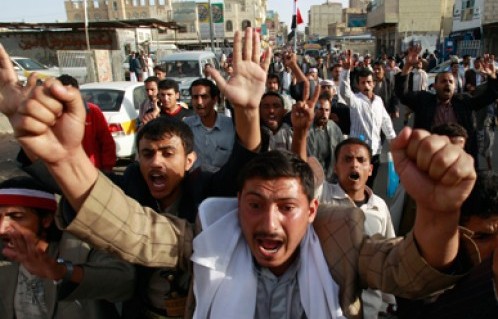 The speculation about the health and future of President Ali Abdullah Salih of Yemen is wild today. On Friday he was wounded by a rocket attack on his compound that killed several others. I first heard about this when someone called me and mentioned that in Pakistan they were saying he had been killed in the attack.

When he only gave an audio message afterwords, and that with a clearly heavy breathing voice, it was still not clear what his injuries were. Since government sources are certainly not believable and no reporters were on the scene, all kinds of rumors spread easily. Now it is known that Salih with a number of family members and some of the other wounded are in Saudi Arabia for treatment.

So what next? The BBC takes a cautious approach with the headline “Yemenis rejoice as Saleh leaves but fighting continues” while The Washington Post is more optimistic, leading the headlines with “Yemeni crowds cheer as Saleh transfers power,” and stating “The departure of Yemen’s president for Saudi Arabia raises the prospect that a key U.S. ally in the fight against al-Qaeda has lost his grip on a nation tumbling into chaos.” Over at Waq al-Waq Gregory Johnsen reflects the hopes and fears of the situation:

“My guess is that his wounds are much more severe than Yemeni officials have let on, as Salih was well aware that leaving Yemen would make it incredibly difficult for him to return. (This is why he cancelled a planned trip to the US in March.)

There is a lot of speculation right now about whether or not Salih plans to return to Yemen and if the US and Saudi Arabia will be able to prevent him from doing so if he tries.

Most Yemenis are hoping and praying that he is gone for good, but fearing he may attempt a comeback.

Regardless, the fighting goes on. “

So is the dance finally over, or is it just a break in the music? Johnsen is right to note that the wounds must be more severe than previously reported or else Salih would not be leaving the country for medical help. Reports suggest that damage to his face was visible when he walked off the plane in Saudi Arabia, so it could be that he needs plastic surgery. But such an operation would take time and seemingly not be a quick fix. If it is just a brief medical check-up, as the official reports insist, why are a number of his family members along for the ride? It is clearly not a Ben Ali style exit, as his son remains in charge of the elite Republican Guard.

In deference to the prevalence of sexist language in much common wisdom, I will avoid waiting for some unnamed “fat lady to sing,” but since the New York Yankees beat the Los Angeles Angels last night, I have no qualms bringing up the famous quip by the great Yankee catcher Yogi Berra: “It ain’t over till it’s over.” Baseball lovers know that only too well. (They also know that Berra said that when he managed the New York Mets in 1973.)

Certainly the problems that led to the protests are not over, even if Salih does not return. The new man in charge was chosen because he was not considered a threat to Salih and he is a virtual unknown both inside and outside Yemen. Ironically Abd Rabu Mansur Hadi, who has been Vice-President since 1994, is a southerner, born in Abyan. He is one of the few southerners who support Salih and his loyalty has no doubt netted him substantial benefits. But he is caretaker for a government that has little power and is only still functioning because the vast majority of Yemenis have no desire to plunge into Civil War.

I am no prophet, not even one who practices the voodoo political science variety, but I suspect Salih will return to Yemen. His strategy, if indeed it deserves to be called a strategy since it seems so illogical from the outside, has been to delay and dilly dally, make promises he has no intention of keeping, round up some staunch loyalists and try to outlast the protests. Meanwhile Yemen sinks deeper and deeper into the poverty that is insuring his ultimate downfall. But Salih has invested heavily in his material assets in Yemen as well as trying to preserve his image as a father of the modern state. I do not see him sharing a Saudi condo with Ben Ali and Mubarak, even if it had room to expand for an unplanned arrival of Syria’s al-Asad.

But I also do not underestimate the fear of death that must crush one’s confidence at a moment a bomb goes off, shrapnel cuts into you and people near you fall to the ground lifeless with blood gushing out. It must also have been a shock that it happened in his well-guarded presidential compound and that apparently those firing the rocket knew exactly where he was at the time. It must be running through Salih’s head that there are those around him who are willing to sell him out, as Ali Muhsin has done. But when you have been on top for over three decades, even if it was not that easy to maintain power, forced retirement is a rather poor option. No doubt Salih would like to go out under his own time table with a succeeding regime friendly to him and his legacy. His actions over the past few months suggest to me that such a scenario is a hookah dream. But Yogi is right, even if his grammar is unpolished: it aint over till its over and it aint over yet.