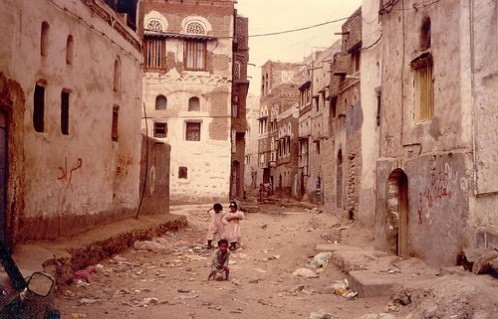 You’re sitting at home, watching your favorite TV show. Suddenly the power is cut off!  The electricity of the one square mile neighborhood is down.

Even though you are tired, you decide to leave the house and go out with some friends. You get ready, and now as you are taking a shower, the water is cut off. The water in your private water storage tanks is completely empty. The public utility water supply is only available for three days each month, so you have to store water in your private tanks to be used for the rest of the month; however, this water will not be enough, which means you have to buy water from private companies at least twice a month.

Being unable to finish your shower, you manage to somehow get dressed and leave in your car. Since you are a big fan of safety, you click in the seatbelt. But as you are driving, a cop standing at a major intersection to organize the traffic waves at you to stop.  He ignores the traffic at the intersection that doesn’t have traffic lights, and walks up to you, asking, “Why are you wearing the seatbelt, are you gonna fly away or what?”

You realize he only stopped you for that reason, and wished that you hadn’t buckled up.  He then asks you for your license and registration. After reading through them, he’s not satisfied because the registration is under your brother’s name. The cop then asks for a written authorization from your brother to drive the vehicle, which he knows you won’t have on you. You try to convince him that this isn’t a reasonable request and he just asks you straight up, “Fine, just give me some money and I will let you go.”

Knowing that bribery is normal, you take out a few hundred Riyals, hand it to him, and continue driving.

After driving for sometime around the beautiful city of Taiz, your friend Mosleh calls you and asks you to come over to pick him up. Mosleh is at the city’s DMV getting his license. He tells you that he had to bribe a DMV worker 6,000 Riyals to complete all the necessary procedures for getting the license on time. You end up waiting a couple of hours with Mosleh until the worker comes out and hands him the license. You ask the worker how come there isn’t a driving test? The worker simply mocks, “You aren’t in Switzerland.”

Mosleh then rides along with you to go for dinner. You arrive at a restaurant on a cliff overseeing downtown. What a beautiful view! But when you look over the cliff, beneath there is garbage everywhere. You have accepted that there isn’t an effective waste management department in the city.

Several hours later you arrive home and you see your niece studying hard for her high school final exams, which are unified state exams for the whole country. You encourage her to study hard to be ranked amongst the top ten students in the country.  But she laughs and tells you that no matter how hard she studies, she won’t be in the top ten.

Then she goes on about how corrupt the education system has become and how the students are supplied with testing materials prior to the exam dates. She also mentions the big role that money plays in educational “success” and how often people of powerful position abuse the system to get ahead.

You are shocked from what she says, and as you make your way towards your room, your brother enters the house and seems very upset. He then informs the family how he has been deprived from a government sponsored scholarship to the U.S.A. because he is not well connected. Even though he is known to be the most intelligent student at his university, since he doesn’t have any friends in high government positions or wealthy relatives, he can’t get a scholarship. On the other hand, those with very poor academic standings, but who have the necessary connections, manage to easily receive the best scholarships.

You browse the Internet to understand historical events and what this country lacks. You find some statistics that show unbelievable numbers referring to inflation, poverty, literacy, and corruption. You try to reason that perhaps this country is just poor, but when you research, ask, and investigate, you find out that the country is actually wealthy. It is blessed by a strategic location, and it is the home of an ancient civilization. It also has sufficient fossil fuels and natural gas reserves for its own use and for exportation. On top of that, it has the soil needed for agricultural purposes, and to make it self sufficient with food crops. Its attributes are many, and its wealth is abundant, so where did all this go?

The scenario described above is only a glimpse of what the wise, hospitable, and kind people of Yemen may encounter in one day.

This does not take into account the lands that more powerful people confiscate from civilians. It definitely does not include the large percentages imposed on investors, which they call “protection benefits” – a very ironic principle! They become business partners without any input whatsoever other than protecting the investors from other people of power.

There are thousands of untold stories of oppression, corruption, and theft. Yemen has been on the decline for years. Yemen has been squeezed to the last drop. All it takes is a drive down the streets where government officials and people of power live. They don’t live in luxurious villas. They don’t live in spacious apartments.  They live in palaces; palaces with imported fixtures and furniture.

While the gap between the poor and the rich continues to grow, the middle working class has nearly disappeared. Is there hope for Yemen to flourish?

Now, with the wind of change blowing over the Arab World and reaching Yemen, there is hope.  The Yemenis who have sincere intentions are optimistic. They are praying and hoping that change will take place soon. The people in Yemen have now broken their silence and gained courage to refuse their condition; the fear barrier has been demolished. It is now the point of no return. Change is imminent. Insha’Allah.

If I say to any Arab, “I am from Yemen,” I am confronted with a reply in Arabic “alyaman alsa’eed,” which means “The Happy Yemen.” The word “Yemen” has always been tied with the word “happy,” yet it hasn’t been happy for decades. It is time for Yemen to become happy again, only then I can say I am from alyaman alsa’eed.

This article first appeared as a guest column on SuhaibWebb. It was written by Hesham Hussain.