Why We Must Speak up for Arab Christians 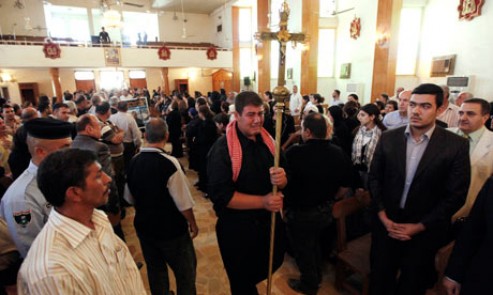 Should we be concerned about the fate of Christian communities in the Arab world?

This burning issue hits the headlines time and again whenever a church is attacked in Iraq or Egyptian Copts are bullied. Most recently an appeal by a group of Arab intellectuals to rise above sectarian divisions was published in the French media following a gory attack against Iraqi Christians.

The media routinely characterise the disappearance or wholesale departure of Middle Eastern Christians as “imminent” or “unavoidable”. And the trend has been to explain the dangers facing the Christian community as a result of the rise of “radical” Islam. This explanation reinforces the idea that Christians are victims who must be “saved” from Islam.

This coverage also provides the opportunity for Arab governments to escape responsibility by blaming religion for any political or social unrest, thus renewing their lease on legitimacy on the cheap.

Conversely, some Western opinion leaders do not realise the impact of statements asserting, for instance, that the end of colonialism deprived Middle Eastern Christians of valuable support from Europeans, or calling Arab Christians “Westernised Arabs”. Such remarks ignore the importance of Christians’ ideological contributions to Middle Eastern societies, and the fact that in the mid-20th century it was Christian elites who imagined, conceived and carried the inspiring project of Arab unity.

The concept of Arab nationalism, conceived in part by Christian Arab intellectuals, such as Michel Aflaq, the Syrian founder of the socialist Ba’ath party, was based on the idea of a social body where clan, tribal and religious divisions would be subsumed in the nation, or even in the Arab community. Arab unity was the avenue to a pan-Arab state bolstered by the values of reason, citizenship and modernity.

Despite efforts for pluralism, such as the UN coining 1999 the Year of the Dialogue of Civilisations, the international community seems to be blind to the real challenges of diversity in the world in the past decade.

Celebrating coexistence is not the only response. Dialogue between cultures at the international level can succeed only if it is paired with changes at the national level. How can cultural coexistence be promoted if, within national borders, the cult of the dominant faith, or indeed the one-party system, still exists? Governments in Arab countries should protect their Christian citizens instead of bringing to court men and women who have chosen a way other than that of the majority.

Multi-national organisations can also lend their support. The Organisation of the Islamic Conference (OIC) and the Islamic Educational, Scientific and Cultural Organization, in addition to defending Muslims living in the West, can also advocate against the abuse inflicted on Christians in the Middle East.

Some voices, including that of Saudi Prince Talal ibn Abd al-Aziz, the brother of King Abdullah, warn that the departure of Christians would be a threat to democracy and modernity in the Arab world. More such voices should speak up in order to initiate a long overdue debate about the living conditions and rights for religious minorities. A failure of democracy, in which citizens lack equal rights under the law and where there are few checks on leaders’ powers, is largely responsible for the current disaster.

To say that Christians should merely be “tolerated” in the Arab world is grossly unfair. Christians have always been an integral part of the land where they were born and raised, the land of their forbearers, the land of the Bible. They are not a recently imported religious minority that deserves our charity. They do not come from a foreign country. They are active citizens of their homeland where they should have the choice to remain.

If they leave, it will be the end of our history and the beginning of our downfall. The fate of Christians in the Middle East is linked to the fate of the Arab world as a whole.

Political analyst Hasni Abidi is Director of the Study and Research Center for the Arab and Mediterranean World (CERMAM) in Geneva.