Why Israelis Are Spooked by Arab Democracy 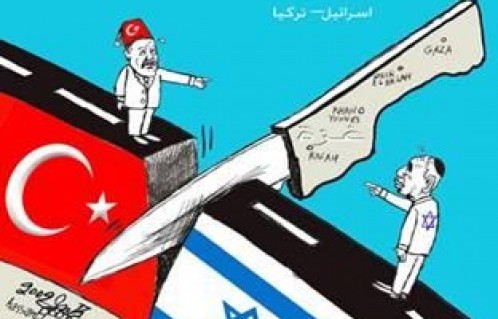 According to Benny Morris, Israel is under internal and external existential threats. From the inside, Israel is facing the growth of religious and nationalist settlers and ultra orthodox conservatism combined with an ever-increasing polarization in wealth distribution and a troublesome Arab minority that wants silly things like minority rights. Externally, Morris sees a region that is collapsing in on Israel. Resurgent political Islam in Turkey and Egypt has resulted in clear anti-Zionist rhetoric and the continued occupation of Palestine is threatening Israel’s democratic character. Israel is clearly facing a troubling time, but are these really the reasons for the Israeli malaise?

Domestically, Morris is more or less on target. The disproportionate influence of the settler movement and the ultra conservatives in the Knesset has resulted in an unbalance flaw of funds to the occupied territories. (Although Morris claims that the uneven birth rates – 8-5 children per family for ultra conservatives and 3-2 for secular families – has created ‘disproportionate clout in Parliament.’ If the issue was demographic, it would not be disproportionate. The Israeli government supports the settlers and ultra conservatives thanks to effective lobbying efforts and a extremist-leaning government that ideologically supports the causes of these groups.) Consequently, the government has been able to provide fewer social goods for Israel proper while allowing for rapid inflation on basic products, encouraging the ‘brain drain’ that Morris speaks of.

Regarding the Arab population in Israel, however, Morris applies a terrible double standard. Most Palestinians living in Israel proper are content to stay a part of the Israeli state if a final two state solution is made, citing greater economic opportunities (itself a reflection of the depressed ability of the PA to develop throughout the West Bank.) Israeli Arabs, though, are unquestionably regarded as second-class citizens that do not receive the same rights as their Jewish compatriots. Laws allowing communities to reject Arabs and preventing Palestinian spouses of Israeli citizens from applying for citizenship are undeniably targeting the Arab minority. If this is what a “Jewish state” looks like, Palestinians would be crazy not to oppose the idea. The fact that Israeli Arabs are pushing for equal social, political and economic rights does not mean that the Arab population is contributing the Israel’s domestic issues, unless, of course, one feels as though Israel should not be granting Arabs equal rights.

Internationally, Morris desperately attempts to blame the increasing regional anti-Israeli sentiment on the rise of political Islam, which he (and others) believes is a negative consequence of the Arab Spring. Morris cites Turkey’s recent turn against Israel and the embassy attack in Cairo as evidence that political Islam has been let loose and is targeting the Israeli state, even though the embassy attack was not perpetrated by Islamists. Typically, Morris ignores the Israeli actions which prompted such a response: namely, the Mavi Marmara attack and the subsequent diplomatic war with Turkey and the murder of five Egyptian policemen by Israeli forces. Prior to the Israeli attack that killed nine Turkish citizens, Turkey was considered one of Israel’s most important and loyal allies – all under the same government – yet Morris explains the Turkish shift in foreign policy as a new twist is Islamism in Ankara. In Egypt, Morris is surprised that Egyptians resent Israel, even though Israel buys gas and oil at a reduced price from Egypt and Egyptians do not hold full sovereignty over the Sinai?

Morris also notes that the west supports the Arab Spring as “heralds of democratic transformation,” but notes that “Israelis are less optimistic.” Simply because forces such as the Muslim Brotherhood may gain political control in Egypt, Libya and elsewhere does not mean that the Arab Spring did not usher in democracy. Israelis are less optimistic because they correctly view the democratization of Egypt, Libya and potentially Syria as the process that will bring people and parties to power that will no longer accept Israeli unilateral breaches of international law and will stand more firmly next to the Palestinians in Gaza and the West Bank. Democracy is the form of government that reflects the wishes of the people and this is precisely what Israel is scared of. Egyptians, Turks, and Palestinians are looking disapprovingly at Israel’s repeated violation of airspace in Lebanon and Egyptian territorial waters, the murder of foreign citizens with impunity, and the continued occupation of Palestine and the siege on Gaza. Consequently, these governments are moving away from Israel. This is not a failure in democracy, as Morris implies, but rather a confirmation of its efficacy. The evolving anti-Israeli notions in the region should not be seen as a failure of the democratic Arab Spring, but rather as proof that Israeli regional exceptionalism is withering.

There are many reasons why Israelis may be feeling increasingly isolated this fall. However, the evolution of Israel’s domestic and foreign challenges are not independent of Israeli policy. The break in ties is not, as Morris implies, a new inherent consequence of political Islam in Ankara, but rather a reflection of the management of the Turkish alliance by the Israeli government. Likewise, Egyptian criticism (even in the form of a highly illegal and regrettable embassy attack) can be traced to the humiliation of Egyptian people by Israel (SCAF’s mismanagement of the democratic transition certainly didn’t help either.)

If Israel is going to relieve itself of this impending sense of regional isolation, it must take a moment for self-reflection. For too long Israel has been blaming criticism on some unreasonable anti-Semitism or rejection of the Jewish presence in the Holy Land. Of course, there are some extremists that reject Israel as a state and base their proclamations and actions completely on anti-Semitic influences. This current state of Israeli unease, on the other hand, should not be seen or portrayed in that light. The troubles Israel is facing at home, and abroad with Turkey, Egypt and Palestine are all self-imposed and could easily have been managed or prevented.

This post originally appeared on Notes from a Medinah

Chris Keeler is the creator of Notes From a Medinah and has lived in the Middle East for over two years, moving from Lebanon, to Saudi Arabia, to Palestine, with stops in Syria, Jordan and Egypt. He received his BA in international relations and French literature from Wesleyan University in 2007. In addition to NFAM, Chris has posted at Mondoweiss and E-International Relations. His work has also been featured by Andrew Sullivan's Dish and the Palestine Center Blog.

One Response to Why Israelis Are Spooked by Arab Democracy