Coming Together: Why I’m Proud to be Egyptian 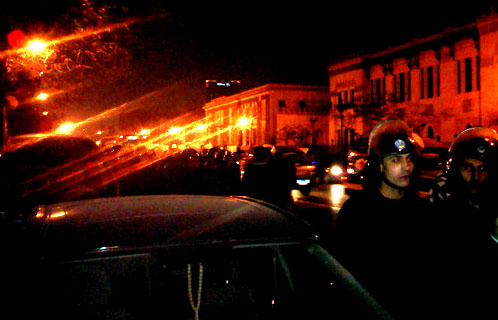 As a child that had just moved to Alexandria, Egypt from the UK – with no knowledge of Arabic whatsoever – I remember constantly hearing this phrase used by Egyptians: “Iskindereya agda’a nas”. This translates into something along the lines of: “The people of Alexandria are the best [because they are the most helpful].”

Fast forward 15 years or so, and it was again a phrase I always heard from Egyptians or other Arab nationalities here in Dubai when I told them which city I was from. Now I must admit that phrase had somewhat lost its meaning over the years – it became more of a line from a song rather than reality. After all, everyone was busy focusing on their own problems, and keeping themselves to themselves. The Egyptian government made its people lose the will to care.

But what a change 2011 has brought to the people. This is the first time in my life I have seen citizens uniting and doing their best to protect one another.

Being unable to travel to Alexandria to join my family and friends in what is set to be one of the most beautiful moments in recent Egyptian history, I have been keeping in touch with everyone via landline. Their information has been more valuable than that of any television news channel – we are finding out what is truly happening.

Most mobile phones are still off thanks to the disruption of service by Vodaphone Egypt and Mobinil – therefore no SMS, no Blackberry service or data packages. Etisalat Misr mobile phones are working most of the time though. As for the internet, there is no access whatsoever – even all Egyptian websites are down. My Facebook homepage feed suddenly shrunk dramatically – my Egyptian friends had disappeared.

But that hasn’t stopped everyone from communicating with each other – in fact, if anything, it has made people more determined.

Saturday saw one of the most dramatic nights of the protests that began on January 25. In the afternoon, things started out calmly with protesters marching peacefully in the street, demanding change. And then as the 4pm curfew approached, the attacks and looting began.

Let me be clear – the people who carried out these horrible acts of violence are not the protesters. I am not going to go into the details of who these people might be – after all, certain news channels are already speculating – but these probably account for 5% of the nation. The rest are peaceful who want change.

Sadly, if these cowardly acts continue, Egypt will enter into a state of emergency. In Alexandria, multiple public buildings have been vanadalised – banks, restaurants, supermarkets, shopping malls. Multiple sources says that Alexandria City Centre is completely unrecognizable now – with all stores broken into and looted. ATM machines have been burnt; banks trashed and money stolen.

Several buildings have been broken into with all flats vandalized and looted. Districts affected include Gleem, Sidi Bishr, Smouha, Bokla, Ibrahemeya and Kafr Abdou in Rushdy.

Additionally, what is especially worrying is that it has been reported that thugs broke into the Alexandria Water Company – known as Waboor el Maya – hence a large number of residents have run out of water with many households set to follow.

I am sure you heard on the news that of course the police and army were either nowhere to be seen or “did not have the capacity” to help its citizens. So as night approached, the male community – young and old; those who are grandfathers; fathers; brothers; sons – got together forming groups to guard their neighbourhoods and prevent their families from being hurt. I am told that groups would take it in turns to guard buildings, with some guarding streets. They would take anything from large rocks to public rubbish bins to block the entry of cars into their street. People they did not know were not allowed in.

Following what must have been a tremendously frightening night, most returned to their houses around 5am, and in the morning, calm had been restored.

Some of the non-damaged supermarkets opened until around 2pm today, but unfortunately they are running out of supplies with people stocking up.

Neither the police nor the army were still anywhere to be seen in Alexandria.

Before the Sunday protests commenced, a friend of mine, Sarah, went out to the streets to look at the happenings in the corniche area and Abu Keer road. These are her own words, as said to me on the phone:

“Let me tell you something – I can’t describe how much that sight filled me with joy. To see young gentlemen coming to the rescue when the army, police or even traffic wardens are nowhere to be seen. They are protecting Alexandria. And there were similar sights all across the city. These sights gave me goosebumps, because it is amazing how everyone is pitching in to help save the city and maintain some order in this chaos.

“And that was nothing in comparison to what residents did throughout the night – guarding their streets, neighbourhoods, and neighbours. It’s sites like these that make you proud to be part of this movement.”

According to other sources, similar sights are being seen across Cairo, as well as the rest of Egypt.

It seems that the saying “Iskindereya agda’a nas” not only has regained its true meaning; it also shouldn’t just refer to Alexandrians. I am truly proud to be Egyptian – I am proud we have finally come together.