White House Web Page on Israel: The Lobby will be Delighted 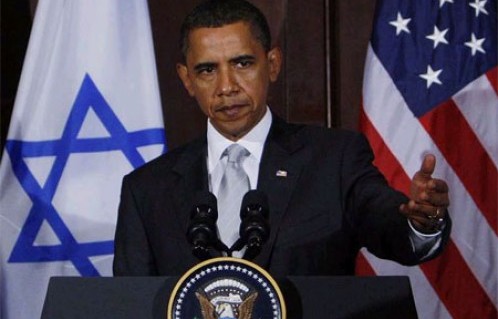 The Obama White House has unfurled a new web-page, it’s called “Advancing Israel’s Security and Supporting Peace.” It’s obviously geared toward appeasing the lobby. There is one reference to the status quo being “unsustainable,” but all references to Palestinians are calls on them to advance peace and staunch terrorism. Most of the site is about Israel’s security. Iran has a whole section. The word “settlements” is not mentioned. 1967 is mentioned.

“[T]he parties themselves will negotiate a border that is different than the one that existed on June 4, 1967 to account for the changes that have taken place over the last 44 years…”

Goldstone’s scalp is brandished; we did this for you. There’s a section about the U.S. opposing the delegitimization of Israel. There are warnings about the Hamas-Fatah reconciliation and implicitly against the Palestinian statehood initiative. A lot of fearmongering:

He has made clear that “it is a sign neither of courage nor power to shoot rockets at sleeping children, or to blow up old women on a bus.  That’s not how moral authority is claimed; that’s how it is surrendered.”  At the United Nations, he emphasized that “the slaughter of innocent Israelis is not resistance — it’s injustice.”

Obama used the word occupation in his June. 2009 Cairo speech and spoke of “humiliations” experienced by Palestinians. No more. He also said:

The United States does not accept the legitimacy of continued Israeli settlements.  (Applause.)  This construction violates previous agreements and undermines efforts to achieve peace.  It is time for these settlements to stop. (Applause)

So much for the applause. The U.S. is making itself irrelevant. The center does not hold.