Whisper it – things might be changing in Syria. A bit. 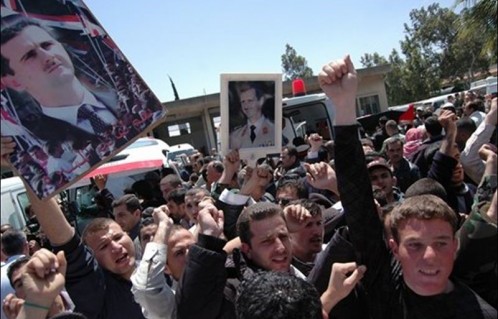 With foreign journalists allowed into the country, moving relatively freely (although with government minders accompanying them); with Michel Kilo and Aref Dalila allowed to take part in an opposition meeting; and with SANA reporting the following – has something changed? (Even the fact that their headline acknowledges that there is a Syrian opposition is new).

Participants in the meeting, in their final communiqué, voiced support for the popular peaceful Intifada for the realization of its aims as to move to a civil, democratic and plural state.

The participants also called for an end to ”security alternative” for the withdrawal of security forces from cities, towns and villages. The participants underscored in their communiqué the “right to peaceful demonstration with no prior approval”.

The journalists, who went to cover the meeting, in particular Satellite TV channels, including the Syrian TV, which were ready to transmit live the meeting, were caught by a surprise when the sessions of the meeting were held behind closed-doors. The journalists were only allowed few minutes to take some pictures.

And so it was that SANA woke up – just a little bit.