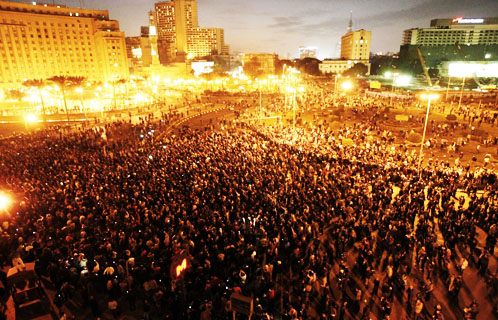 I’m optimistic. I’m optimistic that it’s going to end up in a negotiated resolution where Mubarak steps down but he still gets to die in Egypt. Which seems to be his red line, so to speak.

Is that acceptable, allowing him a dignified exit in Egypt?

It’s not up to me. It’s up to the Egyptian protesters, the people who have suffered for 30 years, the people who have seen so little opportunity in their lives, the young people who started this. Would they settle for that? Look, there have been days and days of protests in the street, and people understand that even that may not force him to jump on an airplane to Saudi Arabia. So maybe the best bet would be to have him step down and have a caretaker gov’t. And those are the negotiations taking place now, what we’re hearing from the Americans– at the ministerial level.

What is the attitude of your friends toward that process?

Frankly I think there’s a lot of divided opinion. There’s a new chant that goes, “Mubarak needs to be prosecuted.” And while the people are still very excited and energetic, we are entering day 12, which means that frankly– I don’t know whether it means that Mubarak has gone as far as he can go. But that’s a demand that won’t be withdrawn, he must step down. And does he end up trying to manage a measure of dignity, he doesn’t have to flee? Maybe.

Today people are just talking about Mubarak needs to step down, and VP Omar Suleiman is not a viable alternative. People don’t respect a former spy chief.

Everybody believes that elections will and should happen in September. Everyone understands the need for a caretaker gov’t.

When I hear talk about Egypt’s terrible economic situation because of the revolution, I think of Gaza, where people have been under siege for years. Is there any connection?

Yes. I do get the sense that the grit and determination that people are willing to undergo is similar. The extreme hardship they will accept because they know what’s beyond, democracy is coming. The idea of sumud, roughly translated as steadfastness. Today a cabdriver drove me home from Tahrir Square. He said, I totally support the protesters. I live on a day to day basis, when I retire I will have almost nothing, and you are my first passenger today. Ordinarily he would have many passengers, tourists, business. But he knows: nothing comes for free, the revolution will require sacrifice.

And frankly they weren’t doing well when the regime was stable. The 5 percent annual growth Egypt has seen for last 10 years is like East Asia. But the benefits and the billions are concentrated on top. The middle class has gotten smaller. People are more stressed. And the poor continue to be poor, even poorer, because of price inflation. People at the top are reaping the vodaphone contracts and the investment in foreign companies. The man on the street can’t afford to eat in MacDonalds.

There is speculation that were it trading, the stock exchange would be down 30 percent now. It went down precipitously at the beginning of the protests, 10 percent, and they ended trading. But most people have no real interest in the market.

There is also speculation that there has been a run on the banks– wealthy Egyptians putting assets abroad. And this regime was based in the business community. When the business community begins to feel the pain, one has to wonder what kind of influence they can exert on the president. Will they force concessions?

Could they be a positive force?

I think necessarily. They have the most to lose. The protesters aren’t going anywhere, they understand that, and the only way for them to recover, their bank deposits, their industries, is for the regime to make concessions. But there’s such a nexus of politics and business, that many of the ruling party members are also in business, so some have an investment in the regime.

Tell me what happened today.

Today I tried to get in– the situation on the ground, the square has been ringed on all sides except for one by the army. It is inaccessible from all sides except one. I was detained by the army for one hour, I managed to get in. There’s only one entrance, and it’s surrounded by barbed wire and tanks. Thousand and thousands of people are waiting on line to get in, to be frisked to get into square. I do endorse the public safety measures, and protesters themselves want them, but what happens is you don’t have the free inflow and outflow of people you had before. Myself I was in for a few hours and then I went out and couldn’t get back in. But thousands and thousands were waiting in line…

And at 5 pm, the numbers had swelled to the most they had all day. There were a few hundred thousand.

Is that because people feel safe to go out?

They do feel safe, but they are also adamant that the thug ganglike tactics that the regime has employed won’t deter them. There’s a digging in, in a sense. The thuggishness has backfired, and the people who have shown up have decided to continue to show up.

Do you see victims of thuggery, and do they have prestige in the crowd?

Actually the number of wounded people is not small. It is not at all extraordinary to see bandaged men walking around. The people who get a great deal of respect are the doctors and the medics. And today the anti-journalist propaganda has convinced the protesters that the journatlists are on their side. So they like the journalists. I was with a foreigner, actually a journalist, and people wanted to stop her and shake her hand. So among the protesters there is a great deal of respect for doctors and journalists.

I think journalists are on your side.

Well, it’s very hard to be objective, and I’m completely on the protesters side. Journalists are people as well. It is very hard not to get a positive sense from the back and forth between the journalists and the people. Especially after they were attacked by the gov’t.

What’s the political feeling in the square?

People continue to be positive. Today was Friday prayer, an extraordinary experience. Tens of thousands of men all praying together, and right after that they began chants, angry chants, the ones we’ve been hearing. Then they greet one another with lively debate about elections. So the people are aware that this is only the beginning.

We called this a revolution early, and it is one. Can’t people feel a sense of triumph from what they’ve accomplished and feel good about the outcomes?

There is a sense of forgone conclusion. People feel that it’s only a matter of time. There’s a lot of uncertainty still, but that exists within a narrowish range. Mubarak’s going to go, we’re going to have a democracy, the west is going to back that up. The whens and whos and hows are what’s uncertain. People use the word Intifadah, casting off the regime. But the more common word is thaura, revolution, and that’s what you hear mostly.

Can they bank that feeling of accomplishment rather than fear the regime?

They can but they won’t relinquish anything. They still stand on the same stage. If the regime prevails, they will have the very same concerns that they had before. Though it seems that the army is on their side now…But I would say there is general optimism. People are optimistic that this is going to turn out well for them.

You mentioned the west. Do they have any good faith in the west?

One of the things that people continue to say is, this is an Egyptian revolution. But they’re not stupid, would it be helpful for the Americans to take a strong stand, for others to take a strong stand? Of course. There is no one here who does not want a quick end to this. But there are certain conditions that have to be met– Mubarak has to go.