What Has Peres Done to Merit Medal of Freedom? 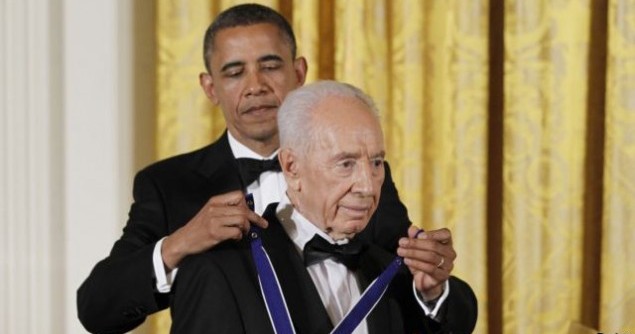 The Presidential Medal of Freedom is awarded by the President of the United States “for especially meritorious contribution to (1) the security or national interests of the United States, or (2) world peace, or (3) cultural or other significant public or private endeavors.” Among its recipients over the years were Norman Rockwell, Georgia O’Keeffe, Maya Angelou, Toni Morrison, Marian Anderson, Cesar Chavez, Rosa Parks and Martin Luther King, Jr.  Consequently, the news that Shimon Peres is receiving the Presidential Medal of Freedom today is jarring. He deserves no such honor when he has done so much to deny Palestinians their freedom.

On September 7, 1997 I stood right next to Peres as we both looked down at the open grave of my 13-year-old niece Smadar. Smadar was killed in a suicide attack in Jerusalem and Peres had asked if he might come to the funeral to express his sorrow.  The family agreed and he came.  Smadar was laid to rest near my father’s grave and in his comments Peres mentioned my father, a general and later a champion of peace.

But Peres is no champion of peace.  His policies have brought about many innocent deaths and the entrenching of Israeli control over Palestinian lives.

As deputy defense minister in the early 1960s, Peres was behind the successful move to introduce nuclear weapons into the Middle East.  He helped establish the Israeli nuclear arsenal.

In the aftermath of the conquest of the West Bank in June of 1967 he championed the establishment of Jewish settlements in the West Bank.  Then, in 1985 as prime minister, he initiated an anti-democratic law to outlaw any contact between Israelis and the Palestine Liberation Organization (PLO). This was an ill-conceived attempt to end the Israeli-Palestinian dialogue begun nearly 10 years earlier.

Peres is also known for being a major decision maker in the Israeli defense apparatus, an apparatus whose hallmark is the long-running oppression of the Palestinian people and the killing of thousands of unarmed civilians in Palestine and Lebanon.

Peres’ one contribution to peace, the one for which he was given the Nobel Prize, was his work on the Oslo Accords. These accords were expected to lead to peace but only served to maintain the Israeli domination of Palestinians and solidify exclusivist, Jewish-only settlements.

Today, Peres is the President of Israel, a post which is little more than a sinecure. He is Prime Minister Binyamin Netanyahu’s “peace” fig leaf.  Officially, Peres oversees a state which under his watch has held thousands of political prisoners; a state where people are governed by different laws based on their ethnic and religious background or, in other words, an apartheid state; a state where some children are denied food, medicine, school and freedom because they were not born Jewish but rather Muslim or Christian; a state where the army can drop hundreds of tons of bombs on a civilian population and where a soldier can take aim and shoot a little girl because she is Palestinian and never be brought to justice.

Peres heads a state that in the West Bank routinely kidnaps children from bed in the middle of the night. Subjected to beatings and psychological terror, the child’s “testimony” is then used against other Palestinian defendants. The child, his family and the defendant against whom the charges are brought have no recourse. The Israeli justice system is stacked against Palestinians receiving a fair day in court.

With the decision to award the Medal of Freedom to Peres, the White House continues to maintain a blind spot regarding Israel. The Obama administration, just like its predecessors, has chosen to ignore Israeli brutality, human rights abuses and a discriminatory system of laws.

Peres represents so much that is wrong with the state of Israel. It is a tragic day when a man like Shimon Peres is honored by the President of the United States with the Medal of Freedom.

2 Responses to What Has Peres Done to Merit Medal of Freedom?