Welcome To the Media Circus Whose Name is ‘Negotiation’ 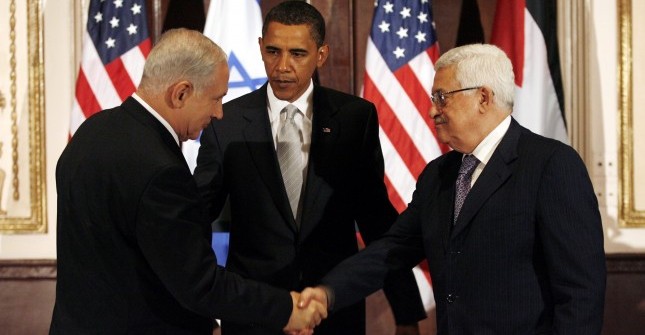 The political peddlers, think-tank experts and media professionals are all back in full force. They want us to believe that US Secretary of State John Kerry has done what others have failed to do. On his sixth trip to the Middle East during his post, and following intense shuttle diplomacy likened to that of Henry Kissinger, Kerry managed to create a modest common space between the Israeli government and the Palestinian Authority (PA), thus securing their agreement to resume the so-called peace process.

The media is focusing a great deal on how the ‘breakthrough’ happened, not on why or whether or not it was really a ‘breakthrough’ in the first place. It is typical in these ‘breaking news’ dramas that the media inundates itself with excessive superfluous details, while paying little heed to the underlying logic behind the entire story.

For now, we know this: Kerry announced from Amman on July 19 that Palestinian and Israeli negotiators had put the groundwork in place to resume frozen peace talks. They have been frozen since 2010 because Israel refuses to stop illegal settlement construction in occupied Palestinian land. Israeli Prime Minister Benjamin Netanyahu wants to continue slicing up the West Bank, fully control and isolate occupied East Jerusalem, build illegal settlements, erect walls and cut down trees, while wining and dining in some fancy Washington retreat, talking about peace and such.

But why would Kerry even bother poking a stick in Netanyahu’s beehive in the first place? One must consider the very tumultuous events that are currently shattering the Middle East region – a military coup in Egypt, a civil war in Syria, a return to major violence in Iraq, instability in Lebanon, and a sectarian divide that has turned a wide chasm into a bottomless abyss. Isn’t it better for the US to place its diplomatic energies elsewhere? Abbas and Netanyahu are struggling with their own problems, so why are they playing along in a game that will surely fail?

The answer is not simple and cannot be readily expressed through catch phrases and sound bites, although, some commentators are doing just that. Speaking on Israeli public radio, Chico Menashe, said the return to negotiations is like “a half-baked cake Kerry removed from the stove. Kerry convinced the Israelis and Palestinians it was edible, and both sides agreed to eat it.” Natan Sachs, a fellow at the Saban Center for Middle East Policy at the Brookings Institute, was quoted in the Jerusalem Post saying, both parties “basically agreed to disagree, and to talk about that.”

And so the commentary teeters between cautious optimism, high hopes, cynicism and creative metaphors. In the final analysis, few truly understand this latest jumpstart of the ‘peace process’, the political risks it entails, and why the show is likely to go on for a while longer. Predictably, it will come to an abrupt ending followed by a protracted blame game. Knowing how mainstream western media operates, Palestinians will likely be the party responsible for the failure of the talks that are yet to start.

But here are some interesting points that must be considered firstly concerning the Americans. The Middle East region is in a constant influx, between revolutions, counter revolutions and war. Neither the US, nor its traditional allies are able to sway the outcomes in their favor. Neither money, nor arms, nor any political grand scheme is achieving much.

Since the US withdrawal from Iraq in 2010, the US has suffered many blows. Its status as the uncontended superpower is in shambles, and its allies have been caught in the wake of the so-called Arab Spring. Despite attempts at meddling, enticing some parties with money, and inciting violence against others, there are no tangible outcomes that promise to take the region back to an era of ‘political stability’, as in the same old status quo, that of political stagnation under US stewardship.

To repair its image, the US has to get reengaged in the Middle East. President Barack Obama’s administration, besieged by a dysfunctional Congress at home, is barely relevant in the Middle East anymore, with Russia, France, Britain, Turkey, and even China making headway. Resuming the ‘peace process’ is necessary to give the US a chance to claim leadership in a leaderless region.

Second, concerning the Israelis, Netanyahu’s rightwing-dominated coalition government might have looked as the ideal scenario for a rightwing politician who based his career on his love affair with armed settlers and his unmitigated detestation of the United Nations and international law, which he never thinks should apply to Israel. However, being firmly positioned in the rightwing circle has proven to be a public relations disaster.

Even his ever-supportive and malleable European allies are now turning against him. Europe can no longer be seen as an unconditional Israeli backer while pacifying its own populations, the majority of whom don’t tolerate Israel’s occupation, sieges and violent behavior. If Netanyahu has his domestic audiences to appease, EU countries do too. The writing on the wall became even clearer on July 16, when the Israeli newspaper Haaretz reported on the publication of an EU directive that paves the road for complete boycott of Israel’s illegal Jewish settlements in the West Bank and East Jerusalem. The directive, which will become effective Jan 1, 2014, is binding. It forbids any EU funding or cooperating with any entity that operates in “the territories occupied by Israel since 1967 (which) comprise the Golan Heights, the Gaza Strip and the West Bank, including East Jerusalem.” Although grossly belated, the EU move is truly unprecedented and deserving of the ‘earthquake’ depiction made by a senior Israeli official. The EU directive was described by Economy Minister Naftali Bennett with palpable hysteria as an “economic terror attack.”

Israel is in desperate need to remold its scruffy image which has resulted from too many bombs, damming evidence of war crimes, and arrogant speeches made by numerous politicians. Any ‘peace process’ at this time would indeed do Israel’s image some good, although it will make no lasting difference.

Lastly, the Palestinian Authority, an entity that was created with Israeli consent, and funded by US-led donor countries, cannot operate outside the US political sphere. According to a reading of the just published annual report by the Palestinian Monitory Authority, as reported by Ma’an news agency, the West Bank economic indicators for 2012 were terrible, and prospects for the next two years are even worse. The PA has no political vision, and even if it did, it is too overwhelmed by economic dependency to act as a self-respecting political entity. The PA has to play the game, fully knowing that the game has been rigged from the very start.

All three parties know this very well, but they are willing to return to the negotiations table. Any table will do while they pause for photos, smile and shake hands over and over. By doing so, a media circus made of experts will resume, are ready with metaphors, clichés and sound bites, as long as they are crammed into 30 seconds or less.