Obama Speech: Historical, Rather Than Hopeful 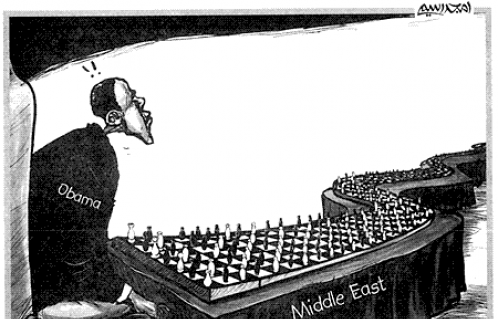 It was akin to watching a train wreck. Not because of the human fascination with the moribund, or with carnage. No, most people watch a train wreck because they implicitly know what’s about to happen, and watch just to confirm their worst impulses.

And so it was with Obama’s oratory; not because there was crumpled metal and screams, but because most pundits, casual observers and even the average Ahmed or Daniel on the street had predicted what was to occur. It was a strictly predicable performance, albeit well meaning and powerfully oratorical, at least for an American audience.

There was support for the Arab Spring. Dictators, autocrats and inefficient bureaucrats were asked to either bring about meaningful change in the Arab world, or move on. Depart. Disappear. Bashar of Syria was called an ally, but also asked to step up, or step aside. That’s all very well, but there’s little initiative in condoning the flight of the horses while bolting the stable door.

As per Mr. Obama, “We [the United States] face an historic opportunity. We have embraced the chance to show that America values the dignity of the street vendor in Tunisia more than the raw power of the dictator…” Yes, Mr. President, but that’s after the Tunisians, and the Egyptians, overthrew their own yokes while the US stayed wilfully behind the curve, torn between the twin desires of idealism and the practicality of the status quo.

As James Zogby says in the Guardian, Obama’s belated clambering onto the bandwagon is of little consequence, and possibly a little opportunistic.

“Arabs already understand that their region is undergoing a profound transformation. And they know and either welcome or dread the challenges they will now face in constructing a new political order. But these, as the president acknowledged, are their transformations and their challenges.”

Now that Mubarak et al are gone, it’s rather easy to appreciate their absence. There was however little cajoling for GCC states to allow perhaps even a little interlocution.

Moving onto the perennial issue of Israel and Palestine, there was again much restatement of the obvious and the hackneyed. Israel was mentioned 28 times, note the compulsive hacks at the Politico website. Israel’s security is of course paramount, said Obama leaving aside the fact there’s little in the way of existential threat facing the country. Palestine needs to be recognized as per its 1967 borders, he said, while also paradoxically stating the US will ensure all motions against Israel’s agenda of annexing an entire people are summarily struck down. Quite how the Obama administration is planning on acknowledging a Palestinian state while threatening to veto a Palestinian bid for statehood at the UN assembly remains beyond the grasp of most.

In this less than most vehement of speeches, the US was relegated to the status of a scribe charting a course of history already started. Barely a week has elapsed since hundreds of the forced Palestinian diaspora commemorated the Nakba by marching unarmed to their country’s borders, stepping across the Golan Heights to welcome a land they once called their own. The Palestinian non-violent resistance has arrived, to borrow a phrase from The Economist. And for once, there’s a passing possibility that discrete action towards recognizing their plight might not have to depend on US benefaction. Obama’s call for a two-state solution is not defining a new reality; it’s merely acknowledging one that is already being painstakingly etched.

This isn’t to say Obama’s speech was a complete failure. In point of fact, it was a well-reasoned polemic about a changing world. But it remains at best an attempt to jump on an already careening bandwagon. At worst, it reeks of ineffectual opportunism. It was more realistic than his Cairo speech, where there was much ado and promise about nothing. Yet there remains a sense in the Arab world, and the international community at large, that America has lost the will or perhaps the ability to shape events. At present juncture, Obama seems to be content to recap the obvious in lofty rhetoric. For America, his speech might have been a brilliant exercise in bringing voice to the speechless, hope to the masses, pancakes to the hungry and the power of flight to whom gravity is nuisance. For the rest of us, it was strictly anodyne, a belated restatement of the obvious, and business as usual.