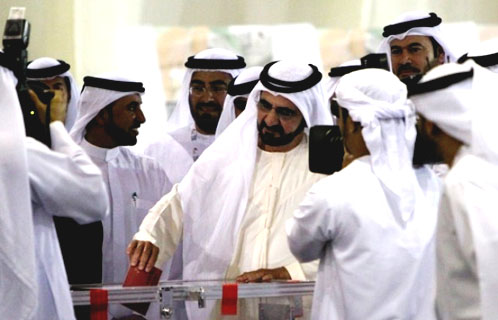 The elections for 20 seats of the 40-seat Federal National Council took place on Saturday using a high-tech voting system that meant the vote was done and dusted by midnight and the new members duly named.

I had wondered what the turnout would be like and, using Gulf News’ figures on the number of votes cast for each candidate (a total of 19,939 votes cast by the 129,274 eligible voters), the turnout was about fifteen percent.

Voter turnout was higher than expected, Gulf News tells us.

The seats are distributed between the emirates, four respectively for Abu Dhabi and Dubai, three respectively for Sharjah and Ras Al Khaimah and two for Ajman, Umm Al Quwain and Fujairah. The least votes were cast by the voters of Ajman, with fewer than 600 making it to the polls.

The votes were cast at 12 voting centres around the country. “Most of the voting process was smooth and there were no major glitches at the majority of the centres” Gulf News’ cover story reports, which means there were major glitches at a couple of centres. This cynical reading of the doublespeak is borne up by the quote from the Ministry of State for FNC affairs, who tells Gulf News on page 9, ‘The process worked well in general, though we suffered from some technical troubles.”

Caviling apart, there appears to have been much widespread happiness at the successful conclusion of this young country’s experiment with voting.