UN Report on Gaza Flotilla is ‘…a shocker’ 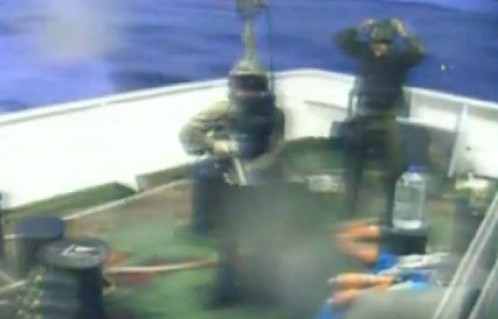 The New York Times has broken the story of the UN report on the Gaza flotilla of May 31, 2010, and it’s shocking. Israel’s blockade of Gaza is legitimate; the Turks who were on the boat the Mavi Marmara, boarded by gun-wielding commandos in international waters, were violent; the flotilla organizers screwed up, etc. Israel is overjoyed, reading between the lines of the Times report, the Turks are incensed…

The report is hard on the flotilla, asserting that it “acted recklessly in attempting to breach the naval blockade.” It said that while the majority of the hundreds of people aboard the six vessels had no violent intention, that could not be said of IHH, the Turkish aid group that primarily organized the flotilla…

The report assailed Israel for the way in which the nine were killed and others injured. “Forensic evidence showing that most of the deceased were shot multiple times, including in the back, or at close range has not been adequately accounted for in the material presented by Israel,” it says….

“the Palmer committee said while it had concerns about that policy and urged that it be loosened further, it saw the naval blockade as a purely security-oriented tool that had been imposed to stop weapons arriving to Gaza by sea.”