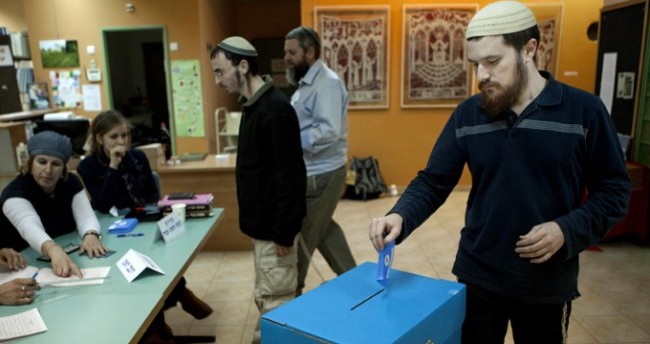 In some parts of Israel, voters in this week’s elections cast a ballot not on how well their municipality is run but on how to stop “Arabs” moving in next door, how to prevent mosques being built in their community, or how to “save” Jewish women from the clutches of Arab men.

While the far-right’s rise in Israeli national politics has made headlines, less attention has been paid to how this has played out in day-to-day relations between Israeli Jews and the country’s Palestinian-Arab minority, comprising a fifth of the population.

According to analysts and residents, Israel’s local elections have brought a tide of ugly racism to the fore, especially in a handful of communities known as “mixed cities”, where Jewish and Palestinian citizens live in close proximity.

Jewish parties, including local branches of the ruling Likud party, have adopted openly racist language and fear-mongering suggesting an imminent Muslim takeover of Jewish communities in a bid to win votes.

“Israeli society has become more and more racist, and the candidates are simply reflecting this racism back to voters knowing that it will win them lots of support,” said Mohammed Zeidan, director of the Human Rights Association in Nazareth.

Last week, as electioneering intensified, Salim Joubran, an Arab judge, stepped in to ban adverts by the Likud party of Prime Minister Benjamin Netanyahu in the cities of Karmiel and Tel Aviv.

Joubran, who is the first Arab in Israel’s history to chair the Central Elections Committee, which oversees elections, said the ads were “racist and almost certain to hurt the feelings of Arab Israelis and disrupt public order”.

In doing so, Joubran overruled the advice of the attorney-general, Yehuda Weinstein, who had argued that the committee had no authority to regulate online ads and posters.

Notably, Netanyahu and his ministers have refused to condemn or distance themselves from the campaigns run by their local branches.

In Jaffa, the commercial capital of Palestine before Israel’s creation in 1948 and now a mixed suburb of Tel Aviv, Likud ran ads against local Muslims. A third of Jaffa’s population are Palestinian, but they face increasing pressure to leave under a programme of “gentrifying” neighbourhoods.

One ad – using the slogan “Silence the muezzin in Jaffa? Only Likud can” – echoed threats Netanyahu made in late 2011 to ban mosques from using loudspeakers to call Muslims to prayer.

A Likud party spokeswoman declined to comment on Joubran’s criticisms.

Sheikh Ahmed Abu Ajwa, an imam in Jaffa, said: “This is a racist campaign but we must not forget that those who promote hatred against Muslims and Christians in Jaffa are simply following the lead of the government.

“It is a great impertinence to tell us we need to silence our mosques. We were here – and so were our mosques – long before Israel’s creation. If they don’t like it here, they are welcome to leave.”

Another poster, implying that Palestinian citizens are not loyal to Israel and that Likud would intensify moves to remove them from the city, said the party would “Return Jaffa to Israel”.

Joubran similarly banned a phone ad used by the Likud party in Karmiel, a so-called “Judaisation” city in the Galilee designed to bring Jews to a region with a large Palestinian population.

Jewish residents had received a recorded phone message from someone calling himself “Nabil” inviting them to a fictitious cornerstone-laying ceremony for a new mosque in the town.

Karmiel’s Palestinian residents, believed to number less than 2,000 in a city of 45,000 people, say they have not even proposed that a mosque should be built in the city.

“Our message is that we want to keep our city Jewish-Zionist. That, after all, is the mission of the state of Israel. We’re not against anybody. But Karmiel is supposed to be a Jewish city and we must not allow its character to be changed.”

He added that at meetings with voters, “the fear that is raised is that the city will become mixed”, and there would one day be an Arab mayor.

Naama Blatman-Thomas, a local political activist, said Jewish parties in Karmiel had resorted to “dirty tricks” in response to the emergence of a joint Jewish-Arab party, Karmiel Rainbow, contesting the council election.

“When I have spoken to Jewish residents, the narrative in their minds is that their city is under threat of a takeover, that the Arabs will take our women, and so on. The views expressed in Karmiel are part of a much wider trend across the Galilee.”

Most communities in Israel are segregated on an ethnic basis.

However, in recent years Palestinians in the Galilee have started migrating to Judaisation cities such as Karmiel in growing numbers because Israeli land policies have deprived their own communities of land for new house construction, said Zeidan.

In rural communities such as the kibbutz and moshav where housing is available, vetting committees have been put in place to ensure housing is off-limits to Palestinian citizens.

But in cities such as Karmiel, homes are available for purchase if Jews will sell to Palestinian citizens. Blatman-Thomas, who is researching segregation policies in Karmiel for her doctorate, said Jews were emigrating from the city because of a shortage of employment opportunities, opening the way to Palestinians from the surrounding towns and villages to buy apartments.

Recent surveys show a strong aversion from many in the Jewish public to living in shared communities. According to the annual Israel Democracy Index, published this month, 48 percent of Jews would not want an Arab neighbour, while 44 percent favoured policies to encourage Palestinian citizens to emigrate from Israel.

Such sentiments have received official backing from municipal rabbis. More than 40 signed a decree in 2010 that Jews must not sell homes to non-Jews.

At that time, Karmiel’s deputy mayor, Oren Milstein, set up an email “hotline” on which residents could inform on Jewish residents who were intending to sell to Palestinian families. Milstein claimed he had managed to stop 30 such sales.

Dov Caller, a spokesman for Karmiel Rainbow, said the city’s attractiveness to Palestinian families in the area was a reflection of the discrimination they faced in their own communities.

“When they have the right to land for development, their own industrial zones, gardens, sports centre and decent schools, then Karmiel won’t be the only option available to them.”

Similar tensions have erupted in Upper Nazareth, a Judaisation city built in the 1950s to contain the growth of Nazareth, the Biblical city of Jesus’ childhood.

Over the past decade, large numbers of Christians and Muslims have moved into Upper Nazareth, with some estimates suggesting of the city’s 55,000 population a quarter may now be Palestinian citizens, most of them from Nazareth.

The mayor, Shimon Gapso, has erected large Israeli flags at every entrance to the city in the run-up to the election, in a move he said was designed to make clear that Palestinian citizens were not welcome in Upper Nazareth.

Raed Ghattas, one of two Arab members of the local council, said Gapso’s whole election strategy had been based on a hatred of Arabs. “There are four candidates for mayor – for us, it is a matter of which one is the lesser evil. But Gapso is definitely the worst of a bad bunch.”

Earlier this year Gapso issued a pamphlet to residents warning: “This is the time to guard our home! … All requests for foreign characteristics in the city are refused.”

He has rejected building a church or mosque, allowing Christmas trees in public places or, most controversially, building an Arab-language schoolfor the 2,000 Palestinian children in the city.

Gapso stoked tensions further during the election by running a bogus election campaign using posters urging voters to “Throw the mayor out” that quoted prominent Palestinian politicians in Israel denouncing him.

Haneen Zoabi, a parliament member who is running for mayor of neighbouring Nazareth, was quoted as saying: “Upper Nazareth was built on Arab land. We will fight to the end against Shimon Gapso’s racism. [Send] the racist home; Arabs to Upper Nazareth.”

Defending his election campaign in an article in the Haaretz newspaper under the headline “If you think I’m a racist, then Israel is a racist state”, Gapso accused his critics of “hypocrisy and bleeding-heart sanctimoniousness”. The important thing, he wrote, was that his city “retain a Jewish majority and not be swallowed up in the Arab area that surrounds it”.

In another interview, he said: “95 percent of Jewish mayors [in Israel] think the same thing. They’re just afraid to say so out loud”.