“We must not rely on oil alone as the main source of our national income. We have to diversify the sources of our revenue and construct economic projects that will ensure a free, stable and dignified life for the people.” Sheikh Zayed 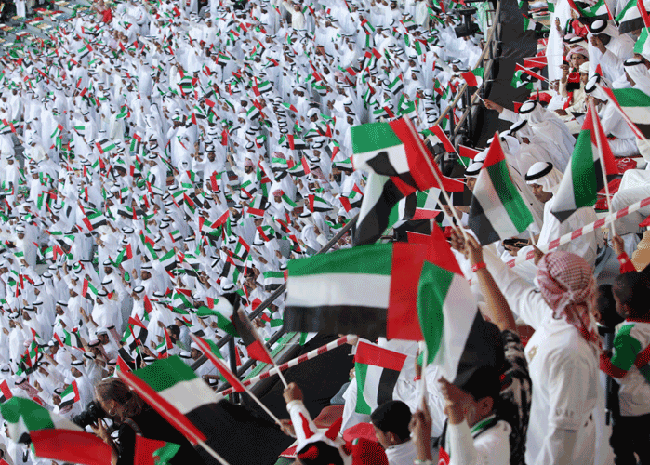 “We must not rely on oil alone as the main source of our national income. We have to diversify the sources of our revenue and construct economic projects that will ensure a free, stable and dignified life for the people.” Sheikh Zayed

It is rare to find two goals that have been able to feed off each other so symbiotically.

Over the last 50 years millions of workers of all nationalities have come together to realize Sheikh Zayed’s vision. Many have had their lives enriched, economically and socially, in the process.

At the heart of this story of growth has been the hands off approach to the workers that have come and gone. The UAE opened its arms to the world, but has never pretended to offer its guests anything more than a warm welcome and “fair day’s pay” – driven very much by market forces.

By not getting involved in any process of naturalization, the UAE has been able to keep its doors wide open. It has not needed to worry about residents staying in the country eventually applying for citizenship, or costly benefits, after a number of years. All arrive knowing that is not on offer. Should there have been a process of naturalization in place, the UAE could not have afforded to be so hospitable.

Finding a job in the UAE is infinitely easier than trying to do so in, for example, the United States or in Germany – if you’re not a US or EU citizen. Both of those countries do offer long term residents citizenship, which means they need significantly more cautious on letting people in in the first place.

No offer of citizenship, no obligation from the UAE to its workers over naturalization has thus meant that quite literally millions of people have had the chance to taste a culture and a life outside of their home country, to get a job they may never have had the opportunity of having, to earn a little more than they could have at home.

So, given the virtuous circle, why should the UAE tinker with its citizenship laws now?

A well regarded thinker Sultan Al Qassemi kick started this question in his article on Gulf News a fortnight ago. He suggested that the UAE consider a “clear process of naturalisation” for those who would like it.

Al Qassemi was not suggesting naturalisation en masse, based on any notion of fairness or humanitarianism, but on economically rational gain for the country. The UAE should cherry pick the best and brightest, he said: The scientists working on ideas that could change the world, the entrepreneurs who create jobs for the 14% unemployed Emirati population, the experts perhaps that have built the bridges, whose intellectual capital is of value to the nation.

Al Qassemi’s 1,000 a year figure is so small as he rightly said it would take 900 years for the naturalised population to outstrip UAE citizens. While the article provoked huge debate online, and a follow on opinion article suggesting it would mean the end of UAE culture, the reality is what Mr Qassemi proposed is almost inconsequential. It would not touch the lives of the majority of those in the UAE. It would, and is, no existential threat to UAE culture or heritage.

The question then is not whether Sultan Al Qassemi went too far, but whether he went far enough; whether the UAE as a country has anything to gain from going further than this and really offering a naturalization process with a much greater reach.

The answer is yes it does.

Sheikh Zayed: “No matter how many buildings, foundations, schools and hospitals we build, or how many bridges we raise, all these are material entities. The real spirit behind the progress is the human spirit, the able man with his intellect and capabilities.”

The UAE has grown until now by sucking in financial capital, resources, ideas and people. With more competition for the world’s best and brightest, as well as its labour, and with banks around the world considerably more risk averse, going forward this may not be a trick it can so easily pull off.

Moreover the UAE is now itself a target. With 9 million people, and an increasingly modern, sophisticated economy, many of the ideas that the UAE once sucked in are now being created here. The UAE has until now benefitted from the free flow of ideas and abilities. Increasingly its own intellectual learning will be exported elsewhere, to competitor nation states.

To continue to grow at the pace it has become used to – if it does actually want to continue to grow at this pace – the UAE needs an economy that is considerably more self-sustaining, where ideas and money circulate and multiply, not exit so freely; where the country’s residents themselves invest, financially and intellectually, in the economy.

In total the 80% of the population that are here as guests sent 45.1 billion dirhams ($12.3 billion) out of the economy as remittances last year. Intellectual capital lost, unquantifiable.

All expatriates think about leaving, and what they will “take” with them.  Expatriates send money home, because that’s where they “build their future”. They look for the next opportunity in the next country because they are discouraged from planting roots in the UAE.

Taking the steps to allow residents to choose the UAE as their future home will require the country to take a hard look at what it wants, where it wants to go, and how quickly.

Should it wants to continue to grow as it has, and more than in financial capital but in the men and women who create it, offering citizenship is one way. A more palatable way perhaps, and certainly a practical first step would simply be to offer permanent residency to those who would buy property, build companies, and invest in the country, giving them the right to remain in the country without the fear of losing that right. Yes, Dubai and Abu Dhabi may become less Arab in the way London is less English than it once was, but both would be much more UAE, a remarkable country that refuses to acknowledge the meaning of impossible.

One Response to UAE: Expats and Citizenship, the Great Debate