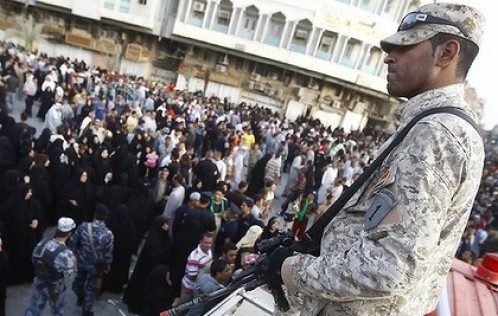 On 22 October, US President Barack Obama announced that all US troops would leave Iraq by the end of this year. Since then, people inside and outside Iraq have been speculating about what will happen next. While many political commentators are focusing on what the United States needs to do, it is also important to consider Iraq’s response – both to its newly gained independence and its relationship with the United States.

While it is unclear how the full withdrawal will affect Iraq, some things are certain. Conflict among Iraq’s different political parties will likely continue. The Iraqi government is still struggling to resolve disputes over who should hold ministerial positions for the Ministry of Interior and Ministry of Defense. And political blocs continue to argue over the allocation of seats after the last election, focusing less on improving basic services for Iraqi citizens.

Despite efforts to curb corruption, it is still widespread in public institutions. And relations between Iraqi Kurdistan and the federal government have hit a new low due to a draft oil and gas law which was approved by Iraq’s cabinet in August and would give the Arab-dominated central government more control over oil and gas reserves. The recent removal of the Kurdish flag from public institutions in the so-called disputed territories has also strained this relationship.

In addition, after the troop withdrawal, the pretext militant groups and terrorist organisations have been using to try to justify attacks on Iraqi security forces – that they are resisting occupation – will no longer be valid. Eventually support from those who agreed with this pretext will diminish, hopefully reducing the frequency of internal attacks on Iraqi forces. And with the disappearance of such “justification”, the government can better use its authority to prosecute violent acts as criminal activity.

The question now is whether Iraqi politicians are prepared for this new phase of self-reliance or not. For this transition to happen smoothly and efficiently, Iraqi political parties need to set aside their divisions and work together to forge a functioning government and economy. The success of future US-Iraq cooperation depends primarily on Iraqis, and their dedication to fostering a new relationship with the United States.

The US-Iraqi Strategic Framework Agreement, which was signed by the two countries in 2008, guides these relationships. Under this framework, relations between Iraq and the United States can focus on diplomatic, educational and economic cooperation. The Unites States has committed to helping Iraq, especially when it comes to education and the economy, and Iraq must abide by the content of this agreement and work to deepen relationships with US public and private sectors.

For example, on the education side, several student exchange opportunities have been made available for Iraqis through the US Embassy. Many Iraqi students, professors and civil society activists have participated in these programmes. Now that more attention and resources can be diverted from the troops, an expansion of such programmes could help individuals in each country better understand one another on different terms, no longer as occupier and occupied.

Regarding the economy, many US companies, businesspeople and investors are coming to Iraq to participate in its reconstruction, another positive indication of constructive relations between the United States and Iraq. The current Baghdad International Fair, an opportunity for various international companies to showcase their products and services to Iraqi businesses and people for the purpose of building greater trade ties, is marked with the wide participation of companies from the United States. Iraqi infrastructure has been deteriorating since 1980 as a result of a number of wars. It is now high time for American companies to contribute to its rebuilding.

Everyone in this world seeks to live in an independent country and Iraqis are no different. The US troop withdrawal lays the groundwork for an independent Iraq and it is time for Iraqis to take the reins. Currently considered one of the most stable countries in the region following the Arab Spring, Iraqis must seize this golden opportunity and foster a fully independent country and a new cooperative relationship with the United States.

Ahmed Kadhum Fahad is Professor of Linguistics at the University of Thi Qar in Nasiriyah.