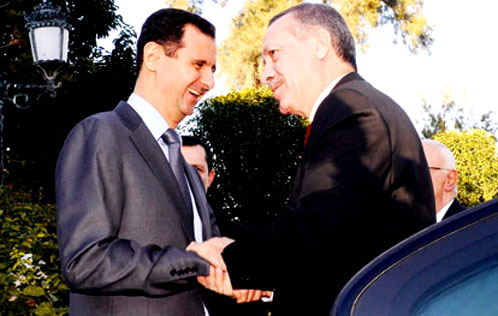 When Recep Tayyip Erdogan became Turkey’s prime minister in 2003, he seemed to be certain of the new direction his country would take. It would maintain cordial ties with Turkey’s old friends, Israel included, but also reach out to its Arab and Muslim neighbors, Syria in particular. The friendly relations between Ankara and Damascus soon morphed from rhetorical emphasis on cultural ties into trade deals and economic exchanges worth billions of dollars. Turkish Foreign Minister Ahmet Davutoglu’s vision of a ‘zero-problems’ foreign policy seemed like a truly achievable feat, even in a region marred by conflict, foreign occupations and ‘great game’ rivalry.

The Israeli raid on the Turkish aid ship, Mavi Marmara, in international waters on May 31, 2010, was not enough to erode this vision. The official Turkish response to Israel’s violent attack – which killed nine Turkish citizens – was one of great anger, but it hardly resembled what Turkey saw as state-sponsored Israeli piracy in the Mediterranean.

However, the Syrian uprising in March, the harsh government crackdown on dissent, and the growing militarization of the opposition – all leading the country down the road to full-fledged civil war – has forced Turkey to abandon its ‘zero-problems’ foreign policy. While Turkey had clearly grown impatient with the bloody crackdowns on widespread protests demanding freedom and political reforms, its growingly confrontational attitude towards Damascus was not entirely altruistic either. Considering the exceptionality of the situation throughout the Arab World, Turkey has had to make some difficult choices.

Turkey’s initially guarded support of NATO’s military intervention against Libya was a litmus test. It proved that Turkey’s membership in the organization, and its regional standing was more important than any foreign policy visions.

“The same stunning irony was clear in Turkey’s relations with (murdered President Muammar) Qadhafi’s Libya. Once these regimes faltered…zero problems was likely to look like a bad bet,” wrote Steven A Cook in the Atlantic, on November 18.

The other ‘stunning irony’ is, of course, Turkey’s hostile attitude towards Syria’s Bashar al-Assad, once considered by Erdogan to be a personal friend. In fact, the leading role currently played by Ankara to isolate and punish al-Assad would seem like the official “denouement of the Erdogan/Davutoglu investment in Bashar al-Assad,” and thus the “end of what has been billed as Turkey’s transformative diplomacy,” according to Cook.

Despite pressure on Ankara to hasten its isolation of Syria, and subtle insinuations that the Turkish leadership is moving too slow on that front, the language alone tells of near complete foreign policy conversion. In a statement on November 15, Prime Minister Erdogan suggested that al-Assad cannot be trusted.  “No one any longer expects (the Syrian President) to meet the expectations of the people and of the international community…Our wish is that the Assad regime, which is now on a knife edge, does not enter this road of no return, which leads to the edge of the abyss” (Global Spin blog, TIME online, November 16).

The apocalyptic language can be justified on the basis of an almost inevitable civil war in Syria, and the instability that such a war could create for an already unstable southern Turkish border. More, with regional and international players already vying for the opportunity to exploit Syria’s internal woes, Turkey’s own internal problems could soon be exploited for the benefit of outside forces. Thus, the new Turkish foreign policy appears to be centered on ensuring a position of leadership for Ankara in any future scenario faced by Syria. It’s a remarkable shift – from a moralistic approach to politics to a crude realpolitik outlook, which may require sacrificing others for the benefit of oneself.

Political realism is often riddled with ironies. While Turkey once threatened to go to war unless Syria expelled PKK’s Ocalan, it “is now supporting a man, Riad al Assad, whose ‘Free Syrian Army’ is doing exactly the same across the Syrian border,” according Ankara-based writer Jeremy Salt. Furthermore, “in confronting Syria…Turkey has put itself at odds with Syria’s ally, Iran, whose cooperation it needs in dealing with the PKK” (The Palestine Chronicle, November 18).

By claiming a position of leadership in the ongoing effort to topple the Syrian government, Turkey hopes to stave off unwanted repercussions from the Syria fallout – and thus control the outcome of that adventure. This explains why Turkey’s largest city, Istanbul, has played the host of the Syrian National Council, and why the Free Syrian Army, which has launched several deadly attacks on Syrian security installations, is finding a safe haven in Turkish territories.

Politically, Turkey is also taking a lead role. Its foreign minister, Ahmet Davutoglu, after a meeting with French foreign minister Alain Juppe, called for more international pressure against Damascus. “If they don’t listen we have to increase pressure to stop bloodshed in Syria,” he said. “But this pressure should not be unilateral pressure, all the relevant countries should act together” (The Financial Times, November 18).

What Davutoglu means by ‘act together’, and which countries are ‘relevant’ is open to speculation.

As for acting, Mohammad Riad Shaqfa, the leader of Syria’s outlawed Muslim Brotherhood, offered his own roadmap at a news conference in Istanbul. “If the international community procrastinates then more is required from Turkey as a neighbor to be more serious than other countries to handle this regime,” Shaqfa said. “If other interventions are required, such as air protection, because of the regime’s intransigence, then the people will accept Turkish intervention” (Turkey’s Hurriyet, November 17).

A detailed plan of that envisaged intervention was published in Turkey’s Sabah newspaper on the day of Shaqfa’s comments. According to Sabah, an intervention plan was put forth by ‘oppositional forces’. Its details include a limited no-fly-zone that progressively widened to include major Syrian provinces and a blockade of the city of Aleppo in the north (Sabah, November 17).

Considering the escalating violence in Syria, and the palpable lack of good intentions by all ‘relevant countries,’ Syria is teetering close to the abyss of prolonged civil war, divisions and unprecedented bloodletting.

“As negotiator and facilitator between the Syrian government and the internal opposition, Turkey has a role to play,” wrote Jeremy Salt, “but provoking Syria along the border,  lecturing Bashar al-Assad as if he were a refractory provincial governor during Ottoman rule and giving support to people who are killing Syrian citizens is not the way ahead.”