Tunisian Youth ‘Turned Off’ By Politics To Effect Change 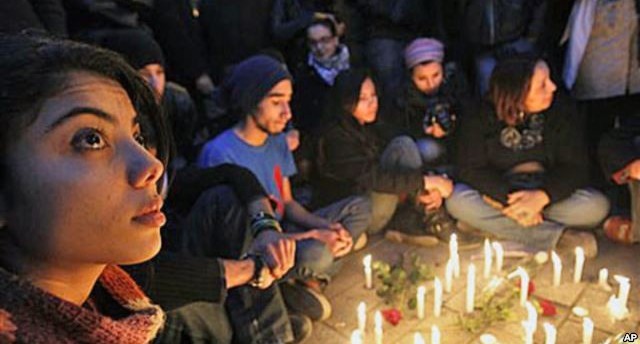 Only 17 per cent of Tunisian youth are interested in politics, and only 27 per cent cast their votes in the National Constituent Assembly election, according to statistics released by the Tunisian Ministry of Youth and Sports earlier this year. These numbers reflect apathy toward political participation and national affairs, mainly because Tunisian youth find themselves largely excluded from the national political scene.

While these numbers are troubling, they don’t tell the whole story about youth. Tunisian youth are still searching for alternative ways to affect change. Focus for some has turned to civil society, where they are finding opportunities to help bring about this change. Others can do the same.

According to 30-year-old Al-Jumhuri Party (Republican Party) member Najwa Karmi, 23 years of dictatorship and marginalisation created a situation where many youth lack the experience, knowledge and skills required for political participation. That said, youth automatically find themselves in the back seats.

Slim Omri (24), a young person from Sidi Bouzid, said youth absence from politics is linked to the fact that elected parties failed to uphold the promise of a better future for all.

According to Souha Bouazizi (25) from Sidi Bouzid and member of the Youth Council of Sidi Bouzid, there is a different reason for a lack of youth involvement in politics: “The cut with political life occurred when the National Constituent Assembly (NCA) was elected on 23 October 2011 and we realised that the majority of its members were old. This was the day where hope for youth involvement in Tunisian politics died.”

Regardless of the reason, low youth participation in politics doesn’t mean that Tunisian youth are not causing positive change to happen.

Both Bouazizi and Ramzi Slimani, a member of the Protection of Heritage and Cultural Tourism Association of Sidi Bouzid, responded to political disillusionment by engaging in civil society.

He and other members of the association helped frame, finance and provide marketing assistance for 20 young women from rural areas who weave carpets to make a living. Slimani describes his experience as beneficial to both himself and the city. They have also petitioned authorities to establish a tourist circuit in the city.

When Bouazizi joined the Youth Council of Sidi Bouzid he joined 20 other 18-30 year-olds who wanted to solve local issues in their city, like violence in schools, and to build a relationship with local government through dialogue.

“Our objective is to improve the role of security services to make the city safe,” Bouazizi said. Indeed, last October, the council organised roundtables and workshops with media, civil society activists and jurists to discuss what should be done to improve security in Sidi Bouzid. They drafted a letter to the Ministry of the Interior and the NCA in which they explained what kind of reform is needed, and intend to provide recommendations in the near future. The Youth Council has furthermore worked to identify concerns of youth in Sidi Bouzid through a widely distributed questionnaire. These results too will be sent to local authorities.

While many Tunisian youth feel they were left out of national politics, there have found other ways to help create a better future for our cities and for our country.

Ghada Daly is an activist from Sidi Bouzid and a member in the Youth Council of Sidi Bouzid.