Tunisia is a Wake Up Call, but for the Pundits 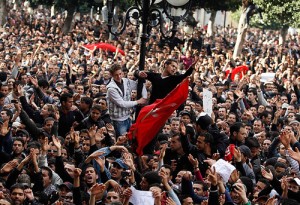 The clarions are calling, and klaxons blaring. Tunisians, finally tiring of a corrupt government, replete with sycophants and sidekicks who were casting a pall of poverty around them while living it up, decided to take action.

The catalyst was an unemployed student whose vegetable cart was confiscated by policemen for not having the requisite licensing and permissions. He self-immolated, more out of despair than protest, and those flames fanned a wildfire of indignation. Unarmed protestors, in their fury, stood up to riot police firing live rounds, and broke the illusion of invincibility that autocracy usually stands on. For it remains a little appreciated truth that an entire population can never be subjugated except by tacit compliance.

Since, there has been any number of label-machine happy pundits wanting to describe the revolution.

The Bush-Blair axis of incompetence want to attribute Tunisia’s emancipation to actions in Iraq – though how rampant torture, plundering and targeted killings can be correlated to a grass roots citizen movement is beyond one.

The denizens of Twitter were quick to claim credit- but they usually are. They’d claim credit for the spread of HIV if they weren’t perpetually shackled to their consumer technology. If you have a minute, stop by and get them to tell you the story of how they single-handedly managed to prevent the 2010 Iran Elections from being a farce, for all that it was still a farce.

The optimists see it as a call for greater pan-Arab awareness; an acknowledgement that citizens’ quality of life should be of greater importance than bullet-proof limousines and palaces.

Of course, the enlightened West has been quick to label this as a hunger for democracy. Alas, but that  also is farcical. The story of Tunisia is that of a people who were pushed to breaking point, and chose the cliff over the abyss. They revolted for there was little else left.

They are not clamouring for democracy, or any of the plaudits and epithets commentators are keen to throw out, but rather for the right to live in dignity. They are putting bodies on the line because their physiques and physiognomies have been ravaged to the point of ridicule. They’re demanding livelihoods, not democracy, regardless of what the adjective-happy brigade might say.

There is a frenetic hope amongst many that this will translate into a region-wide wake-up call for disenfranchised Arabs. Gadaffi of Libya has already abandoned his Ukrainian nurse to speak out against the Tunisian uprising. In a surprising grasp of the issues that matter to the United States, he even managed to implicate Julian Assange and WikiLeaks in the matter.

There remains a fervent little whisper that perhaps the Tunisian phenomenon will spread, and that autocrats region-wide will be losing sleep. Why should it not spread, they say? And one is tempted to concur, for didn’t the French revolution instil a Europe-wide hatred of the vicissitudes of nobility? But it won’t.

For what end is Tunisia’s revolution towards? Not of vaunted democracy, neither of citizen empowerment, but merely a call to live and let live.

Egypt may be next in line, for Mubarak’s seemingly ageless regime has seen the country lurch from one crisis to the next. Just recently, soldiers were pressed to service to bake bread to appease starving masses, while educated graduates remain unemployed and disaffected. Of course, Mubarak does not make the same mistakes that Tunisia’s Ben Ali did – his abilities to manipulate, control, mitigate and stifle remain par excellence.

Algeria has already seen its first case of self-immolation, and unrest is spreading – not because of democratic ideals but because a pitiful standard of living is being further eviscerated by food price shocks.

Should Egypt and Algeria fall – or rather, rise – Yemen and Saudi Arabia may have to pay attention. Both have a large disenfranchised population that is undereducated and unemployed.

But what of other Gulf states? What about the UAE, Qatar and Kuwait? With a hint of schadenfraude, I’m happy to announce that there will not be any traces revolution or dissent there. Bear in mind the constituency of these sheikhdoms. The local population is outnumbered scores to one by expatriate residents from various parts of the world. It is too small to rise. The expatriates, by definition largely opportunistic, would prefer to pack up and head elsewhere rather than effect change.

People denied citizenship usually lack the validity and sense of belonging to be part of a sea change.  Plus, the citizen denizens are hardly disenfranchised. They recognize that dignity in living, and plush houses, are far more useful that esoteric ideas of representation. The rich oil states ensure they offer incomparable disposable incomes and subsidies to their citizens, and flash enough cash that even outsiders remain obsequient. It’s an excellent stratagem, and one that works wonders. As an Emirati commentator from the UAE recently tweeted, “I like my sheikhdom just fine.” Yes indeed, and why wouldn’t you?

Democracy is not a panacea, and people will not rise unless deprived. Tunisia is not about ideals, nor is about Arab identity. It’s merely about the right to a reasonably equitable life. And that is the noblest cause of all. It’s just such a shame it doesn’t fit a convenient label.

2 Responses to Tunisia is a Wake Up Call, but for the Pundits