Time is Running Out For the Children of Gaza 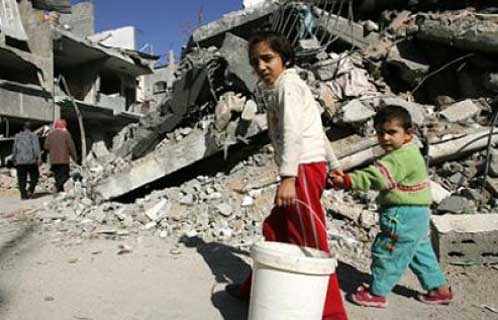 The siege imposed on the Gaza Strip since June 2007 and the Israeli attack on it during Operation Cast Lead in 2008 have resulted in massive destruction of the economic, social and political infrastructure of Palestinian society there. But beyond these immediate consequences, what concerns me even more is the internal siege of minds that has set in, particularly among the youth. It is a development which, if not addressed today, could become the most long-lasting effect of the siege – and the greatest obstacle to peace.

Israel and the Palestinian leadership are both responsible in different degrees for this siege of minds. Yet all of us, including civil society organisations and even individual parents and teachers, could do more to cultivate a culture of peace. Given our circumstances, we must work particularly hard to nurture the youth’s ability to consider their situation using a moderate, open-minded approach to peace and reconciliation with the “other”.

Today in Gaza if you asked a child to paint a picture, he or she would most likely depict a scene of violence. This is how children respond to a reality where violence is daily fare, and is exacerbated by an educational approach which is anti-peace. Furthermore, being cut off from the world means that these young people are deprived of the knowledge that there are alternatives to the life they lead.

The long-term ramifications of maintaining the siege and the current levels of violence will not be limited to the Gaza Strip. Its implications for future peace are enormous. Moreover, the narrowing of minds is not limited to Gaza: severing Gazans from the world also means severing Israeli children from Palestinians.

The Israeli government should take a deep and serious look at the results of its policies towards both the Israeli and Palestinian peoples. It must understand that the siege and its militaristic approach affect both peoples. Ending the occupation and making peace is an Israeli interest par excellence. No country can survive being in an almost constant state of war and aggression with its neighbours.

Also, the Palestinian political regime, with the entire spectrum of its political bodies, must take a deeper look at the ramifications of its policies and educational programmes. It must make sober decisions regarding its use of missiles, bombs and other forms of violence against the “other”, not only out of concern for the Israeli people – although this is a serious aspect of the issue – but out of a core belief that a culture of violence undermines our chances of building a vital and just society in Palestine.

Strengthening a culture of peace and moderation within Palestinian society is a Palestinian interest par excellence. This in no way means halting the struggle to realise our right to establish an independent Palestine with Jerusalem as its capital, but we must choose our methods, our rhetoric and our programmes with care.

Recent developments in Tunis and Cairo demonstrate that governments who impose their power on the people cannot last forever. They ought to listen to the needs and expectations of the people they govern today, and work hard to secure their future, or the people will find another way to forge a better future for themselves.

One day, Israeli and Palestinian leaders will realise that peace is the only way to secure a better future for both populations. Chances of achieving a sustainable peace will depend on what we do today. We reap what we sow. If we want apples we must plant apple seeds. If we want to plant peace, understanding and tolerance for our children, we must sow those values today.

Omar Sha’ban is an economic expert, and Founder and head of PalThink for Strategic Studies, an independent intellectual and cultural organisation in Gaza.