The Vital, Enduring Legacy of the Goldstone Report 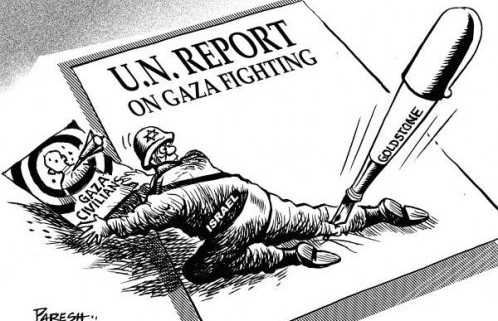 In the wake of Judge Richard Goldstone’s op-ed in the Washington Post “reconsidering” one part of the United Nations report on the Gaza conflict that he co-authored, many have tried to write the obituary for the Goldstone Report. The truth is that the Report is more alive than ever. The ferocious debate ignited by Judge Goldstone’s Op-Ed has demonstrated that the world refuses to forget those 22 days in the winter of 2008-2009, when Israel pummeled the Gaza Strip, killing more than 1300 people, including over 300 children.

And it has shown that the 450 pages of the report have lost none of their power to shock and galvanize.

“The court of world opinion has accepted that the Report is credible and that the events it described occurred,” Desmond Travers, a retired colonel in the Irish army and a member of the Gaza fact-finding mission along with Goldstone, told us yesterday. “People saw on their TV screens that unacceptable levels of terror were brought down on a defenseless city. And then a report came out and confirmed that understanding.”

As many others have pointed out, Goldstone’s op-ed does not stand as a recantation of the Goldstone Report. Even if one accepts Judge Goldstone’s claim that Israel did not intentionally target civilians during Operation Cast Lead – a position that the U.N. Committee of Experts, the official body charged with monitoring Israeli and Palestinian investigations into Cast Lead, does not support – the vast majority of the report stands as written. As Judge Goldstone has said himself in an interview with the Associated Press, “I have no reason to believe any part of the report needs to be reconsidered at this time.”

This means that Judge Goldstone still believes that Israel and the Palestinian authorities committed war crimes during the conflict, that Israel intentionally targeted Gaza’s civilian infrastructure and used “deliberately disproportionate force designed to punish, humiliate and terrorize the civilian population.” These are the damning charges that remain unchallenged and that demand international action.

Beyond the specific charges leveled by Goldstone’s fact-finding mission, perhaps the true legacy of the Report is the way that it reconfigured the world’s understanding of the Israeli-Palestinian conflict. The Goldstone Report helped “to reframe the Israeli-Palestinian debate around the world,” the LA Times editorialized. Instead of a superficial political debate about a stagnant peace process, the Goldstone Report introduced the concepts of international law and human rights into the discourse. It gave us a new language with which to describe the atrocities of Operation Cast Lead – and not just Operation Cast Lead, but the decades of Israeli occupation – and in giving us this language, it held out a solution to the “crisis of human dignity” that has perpetuated violence in the region for so long.

As Naomi Klein writes in the introduction to The Goldstone Report: The Legacy of the Landmark Investigation of the Gaza Conflict: “The Goldstone Report, with its uncompromising moral consistency, has revived the old-fashioned principle of universal human rights and international law—a system which, flawed as it is, remains our best protection against barbarism. When we rally around Goldstone, insisting that this report be read and acted upon, it is this system that we are defending.”

This is a cause that was taken up around the world following the original publication of the Goldstone Report, and the commitment to that cause can be seen today in the outrage and confusion surrounding Judge Goldstone’s Op-Ed.

As editors of The Goldstone Report (an abridged version of the report with a dozen essays) we recognize and honor the work that Judge Goldstone has done to help bring the report to fruition. But we also believe that now the report stands apart from him. It is no longer his report, or even the UN’s report, but it is our report.

“Richard and I ceased to have any connection to the report when we turned it in and it was accepted by the Human Rights Council,” Colonel Travers says. International civil society has seized up the call for justice and transformed the Goldstone Report from a simple document to a powerful tool for truth-telling and accountability. “It starts with reading the report,” Naomi Klein writes.

No doubt there will be many people who will exploit this moment to attempt to bury the report once and for all. The Israeli government has been working overtime to press the United Nations into voiding, or at least qualifying, the original document, while longtime Goldstone Report critics have been gleefully pressing the line that the whole report is now mortally flawed.

But the process the report started can’t be so easily undone. It has permanently transformed the landscape of the Israeli-Palestinian conflict and will not be unraveled by a single Op-Ed.

One Response to The Vital, Enduring Legacy of the Goldstone Report