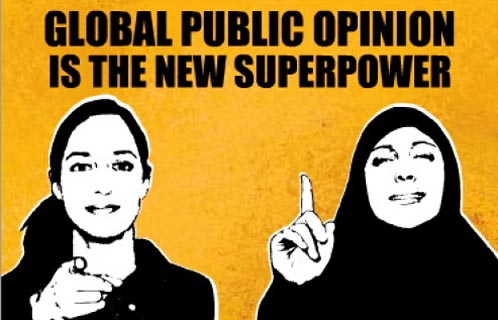 On Saturday the Libyan president (41 years in the presidential office and counting), Muammar al-Gaddafi, came out on Libyan TV to give one of his rambling speeches but this time it was worth listening to. He expressed what a lot of Arab leaders are probably feeling towards the revolution in Tunisia; fear. More importantly by speaking dismissively about Wikileaks, Facebook and Youtube, he gave them the credit they deserve.

Online activism in the Middle East is reminiscent of the printing press revolution in Europe. At the time European dictators were unable to get ahead of the spread of information but by the time these tools got to the Arab world, political leaders already knew how to keep a handle on things.

Now with technology, regular citizens are again ahead of the game. When I was growing up in Saudi, people were paranoid about being overheard complaining. Little kids had this ingrained in them and were told that “they” can hear you through the electricity outlets in the walls and that those nice neighbors next door are spies for “them”. People did not talk to each other and they did not complain because stories and rumors abound about some distant relative or acquaintance mysteriously and forever disappearing and about dark dungeons in palace basements.

Never before the internet could everyone and anyone who cares have gotten their hands on the piece that got Dr. Al-Abdulkareem imprisoned indefinitely and without trial. Nor could they have expressed their support in such huge numbers online that the government becomes powerless in quieting them.

What Twitter, Facebook, blogs, Youtube…etc do in the Middle East is that they confirm our hunch that our fellow citizens feel the same way. And this alone is a powerful realization, and now we’ve taken it a step further by connecting, forming online groups and contacts that occasionally develop into real meetings and groups on the ground.

The division and isolation that was upheld and so valuable to Arab leaders has now become a thing of the past. And now Arab governments are struggling to get back in control but so far they only sink deeper. Like when Dr. Abdulkareem published his piece on his Facebook page, he was shortly later detained. If it weren’t for his detention, not many people would have read what he wrote. Only those politically involved would have sought it out, but after the widely shared news of his imprisonment, everyone wanted to know what it was that he wrote. It was Emailed, BBMed, and printed out and shared with those of us who aren’t online. So the government’s traditional approach actually caused the piece to become more widespread and for the offending writer to gain supporters in the thousands.

This is just the beginning, and we will soon outgrow the current online tools. Activist journalism is now catching on. People can no longer tolerate just being aware of what’s going on, they need to be able to do something about it. Right now the “happening” thing is petitions such as on Change.org and Avaaz.org. On Change.org, anyone can write up a petition about an issue they care about, and if it concerns an American politician there’s a drop down menu where you can click their name and automatically get it sent to their Email inbox. If it’s international, the writer has to find the Email address of the targeted politician for themselves. It’s a fantastic tool and it would be empowering if we could have a similar kind of website made by people of the Middle East and in Arabic. Even better, the Saudi Ministry of Culture and Information could have taken up such a project instead of their flailing attempts at controlling the Saudi online community. To give citizens that kind of access and outlet where they can petition their issues online would help a lot in letting out the average citizen’s frustrations. It would be like a national council where every citizen is a member with a platform.

The only way anyone in this region is going to remain in power, is by adapting to this new internet age rather than sticking to the traditional methods of suppression; more transparency, more freedom of speech and above all more power to the people.

One Response to Social Media is Catalysing Arab World Change