The Ultimate Target of Palestinian Demonstrators 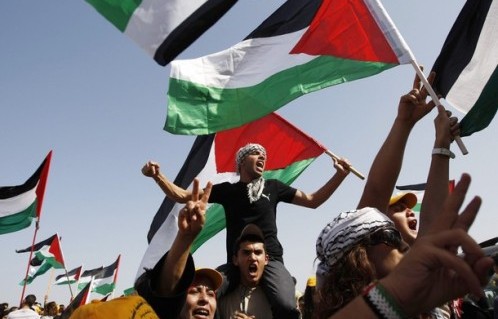 The slogans are simple enough: “the people want an end to the division,” tens of thousands of young protesters in Gaza and the West Bank chanted as their protest movement demanding Palestinian political unity kicked off March 14.

But beneath the simple slogan is an audacious goal that would strike at the heart of a key Israeli strategy used to maintain their 44-year-old occupation of the West Bank and Gaza Strip. The goal, if realized, of a true united political front against the occupation is one giant step toward ending Israeli dominance over the lives of Palestinians.

“We want democratic representation first and foremost and then move to nonviolently challenging the occupation,” Fadi Quran, a Palestinian youth activist, notes on the Institute for Middle East Understanding’s profile page of activists involved with the pro-unity movement. “We’re trying to move toward that goal. March 15th is seen not as an end in itself but the beginning of a new generation of struggle.”

Quran and his cohort are going to have to contend with some major forces working against them.

The deep divide between the West Bank and Gaza is something that is an official Israeli goal. As Israeli blogger Noam Sheizaf reported in September 2010, an Israel Defense Forces document states that a “security and diplomatic objective” of Israel is to separate Gaza from the West Bank. Israeli journalist Amira Hass has documented how “the total separation of the Gaza Strip from the West Bank is one of the greatest achievements of Israeli politics”–an achievement that closes the door on the possibility of a viable Palestinian state.

This territorial split–which began in the 1990s, according to Hass–has been compounded by the political split between the Islamist movement Hamas, which is in control of Gaza, and the Western-backed Fatah, which controls the West Bank. And while the division was cemented in 2007, following the Hamas rout of Fatah forces in Gaza after a U.S.-backed Fatah coup failed, its roots run deeper.

When the Palestine Liberation Organization was still seen as the major threat to the occupation regime during the 1980s, Israel and the U.S. “encouraged the rise of the Palestinian Islamist movement,” according to Stephen Zunes, the chair of the Middle Eastern Studies program at the University of San Francisco. For example, Zunes notes, “while supporters of the secular PLO were denied their own media or right to hold political gatherings, the Israeli occupation authorities allowed radical Islamic groups to hold rallies, publish uncensored newspapers and even have their own radio station.”

The situation is reversed now, but the classic colonial principle of “divide and conquer” remains. When the PLO was co-opted as a result of the Oslo peace process, Hamas began to be seen as the major threat to the Israeli occupation.

The political split, encouraged by Israel and the United States, reached its zenith when Hamas, following the 2006 Palestinian elections, took over Gaza after winning what amounted to a brief civil war there following a U.S.-backed Fatah attempt to overthrow Hamas.

The fact that Israel and the U.S. have sought to sow the seeds of division in Palestine throughout the past three decades attests to the importance of the strategy. The occupation regime would be under real threat if there was a united Palestinian intifada aiming to kick Israel out of the occupied territories–something that the youth movement in Palestine recognizes.

The March 15 movement to end the division has to contend with two separate power structures (not including the Israeli occupation) seemingly intent on holding on to the perks of power and privilege as long as they can. Both the Fatah-dominated Palestinian Authority and Hamas have cracked down on the pro-unity protests.

It remains to be seen if the youth protesters will be able to persevere over the next few weeks and force their political leadership to take heed of their calls for unity. What is clear, though, is that the road to a free Palestine runs through a united Palestinian front.

2 Responses to The Ultimate Target of Palestinian Demonstrators