The Rise and Rise of the Muslim Brotherhood 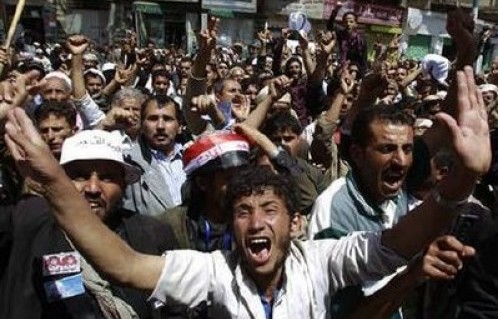 One of the failures of the Arab republican regimes has been their inability to create stable societies.  The fear in Syria of the outbreak of sectarian hostilities is a possibility that cannot be discounted.

But I think that to say the regime is the guarantor of civil peace in the country is incorrect.  I believe that the threat of sectarian strife is actually an indictment of these so-called strong, secure and stable regimes.  Saddam’s Iraq, Mubarak’s Egypt and Assad’s Syria are all examples of regimes that have been in place for decades yet at the first sign of trouble the foundations quake and the social fabric begins to bust at the seams.

I do not envy the Christians in the Arab world today.  They predate the Muslims, and the Jews predate both.   But to pose a question to the question: what if Syria were somehow to be threatened with Western intervention, would the minority regime in power continue to see the Syrian Christians as an ally or would they be viewed with suspicion, a fifth column?

There is no doubt in my mind that we are witnessing the rise of the Muslim Brotherhood (MB) in the Arab world.   Indeed, the calls for revisionism or modernism in Islam cannot be effected by outsiders, or prompted by liberal Muslims or secular Arabs.

If such a transformation were to take place it must be brought about by those with Islamic credentials.  I believe that today in the Arab world we are on the cusp of a resurgence of the MB and eclipse of the jihadist current that shook the world with its extremism.  However, having said that, I do not believe that the future belongs to the MB or Islamist groups.  They are part of the transition.  Rather, it is the youth of today who will determine the future of this region.  And even within the Brotherhood there have been dissenting voices from within the ranks, emanating from its youth who perceive it as out of touch with modern times.

Along to shepherd this process is Turkey, led by an Islamist government that adheres, so far, to the tenets of democracy and benefits of modernity and global association, cooperation and exposure.

The Americans’ tracking Usama bin Laden down to a residential area in Pakistan and not a cave in Afghanistan – indicative in itself of his not being the guerrilla leader he was widely perceived to be by his followers a la Che Guevara – seals the bin Laden chapter.  So who is there to address the problem of Islamic extremism of which he was the predominant phenomenon over the past 2 decades?  Answer?  See above.

Bin Laden was portrayed by his supporters, and there are millions of them, make no mistake, as the standard bearer of a resurgent and defiant Islamic nation.  To them he was the courageous fighter, in the face of overwhelming odds, against an unjust world filled with domineering powers where the poor got poorer and the oppressed where crushed even more.   He was a prophet of victory in an era of adversity.

But Usama bin Laden was a false prophet.  The Arabs are a defeated nation desperately seeking a victory.  They have been tremendously let down by their leaders in the age of independence.  They have suffered defeat upon defeat in military showdowns, their standards of education have plummeted.  The people therefore flocked to the fake, and sometimes extremist, leadership that presented itself as an alternative to the corrupt, failed regimes.

I find it interesting that one of the most prominent Egyptian MB leaders, Abdul Munim abu al-Fotouh, has recently said that he does not oppose the candidacy of Christians or women for the post of president.  Abu al-Fotouh has declared that he’s running for president and that he will appoint a Coptic Christian or a women as his vice-president, so whether his declaration is out of conviction or merely a campaign statement is open to question.  But,  nevertheless, it is a very important position.

Which is why I was critical of the Hamas Prime Minister Ismail Haniya lamenting the passing of bin Laden: “We condemn any killing of a holy warrior or of a Muslim and Arab person, and we ask God to bestow his mercy upon him.” Several days later Hamas announced that Haniya’s statement did not reflect the position of the Palestinian movement, but the damage had been done.

Back to Syria. I cannot declare with any certainty that the Syrian leadership’s choice to employ brute force against the protesters will lead to bloody sectarianism in the country.  But it is certainly creating the conditions for it.  Occupying mosques on Fridays and denying access to them is very short-sighted.  Coming from a minority-led regime it doesn’t take a genius to figure out what the protesters, who are mainly from the ruled majority sect, think about it.

I do not necessarily want to see the regime toppled in Syria, nor do I not want to see it ejected from power. That is a matter for the Syrian people to decide.   But the fact of the matter is that Syria lags far behind in terms of development and progress.

I both recognize and appreciate the importance of Syria’s position at the heart of the Arab world.  Many times I played the devil’s advocate and defended Bashar al-Assad in heated arguments, hoping against hope that the promise would be fulfilled.

Unfortunately he let me down.  And I believe he let down his people and country.

I think the regime in Damascus has lost legitimacy and has been grievously wounded.  It is one thing to want it to survive, especially if the survival is deemed to be crucial to the survival of other minorities, but completely another thing to recognize it as the leading force for a better society.  Will it continue to be regarded as a guarantor of regional stability, the way it was before the outbreak of dissent on March 15?  That is the question being asked and issue being considered by regional and international powers.  And when the President’s cousin comes out and states that Syria’s stability leads to Israel’s stability (and vice versa) I view it as pretty desperate.

To deploy tanks and armor in one’s restive cities will not gain you the sympathy of the population there.  I am waiting for the stories to come out from Deraa once the siege is lifted.  I promise you they won’t be pretty.   For a city to be cut off for so long tells me that something is not right at all.

It is only secure and prosperous states that can guarantee the well-being and voluntary acquiescence of their people.  Tito was Yugoslavia’s strongman for 27 years. The breakup of the country and the vicious war that tore apart its ethnic and religious fabric began 11 years after his passing.  And Tito was viewed as far more benevolent than Hafez al-Assad.

In the Arab world I see dictatorships of ignorance.  What they will be replaced with will come from within, the natural by-product of societies that have been repressed and oppressed for decades.  But change there will be.

We are now on the cusp of a new era.  Muslims will always be the majority in this region.  They have ample examples of glorious Muslim empires of ages past.  That grandeur was partly the result of the Muslims embracing other cultures and nurturing ethnic and religious minorities. In other words, open minds.  According to today’s standards it would be called human rights and Muslims need to fight for and defend those rights, not just when it comes to them but also to make sure they employ them for the well-being for all who come under their care.

In Syria, the regime may be able to hang on… for a while.  The tanks do help.   You may call for a dialogue and maybe some political activists cannot resist the diesel fumes of heavy armor?   But what has erupted cannot be extinguished.  Not by force.  Not anymore.  Protesters still demonstrating, week in , week out, attest to that.  The longer the use of force continues the greater the animosity, even hatred.  And hate is a very difficult emotion to shed.