The Price of Intervention: Can the U.S. Afford It? 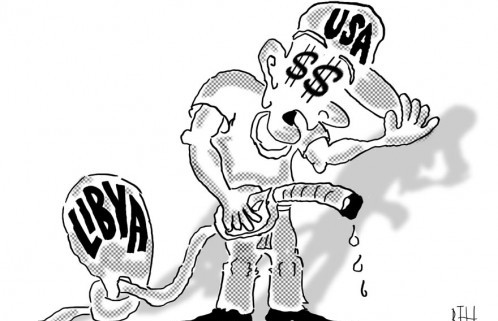 We know that Washington’s motivation for intervention in any guise is self-interest framed and justified, away from the public eye, within a larger geo-political and strategic context that drives the imperial paradigm.

We also know that when moral and humanitarian motives, or “American values,” are voiced, these are pretexts—unless there is a neat coincidence of self-interest and values.

Iraq was about the Israel lobby, oil, Central Asia. Failing to stand up for democratic values in Bahrain is about the Persian Gulf, bases, and Iran; failing to do so in Yemen is about al-Qaida in the peninsula. Hence the U.S .search for that middle point between autocracy and reform and publicly cautioning against violent government response.

Why the difference in response between Libya and Bahrain/Yemen? The rebellion against the regime in Libya has gone too far for anything short of full support of the Libyan people. For the sake of future relations, which of course always includes Israel, better to work with the Libyan people, and perhaps have some influence, however slight and remote, over a democratic Libyan government, than equivocate as in Bahrain/Yemen.

If anything defines the international system, it’s the chronic politicization of global issues and international law, such as war, human rights, international humanitarian law, occupation, environment, and inequality. The US has been a premier practitioner of the double standard, selectively choosing what it will respect and to what measure it will abide.

All states do this, but the most powerful ones can violate international law, even nuclear treaties, with little consequence, while weaker states, should they cross a powerful patron or, in the U.S. case, reject its bidding, are coerced into compliance, violently or otherwise.

There is no moral or legal consistency, and those who loudly interject themselves as the champions of international organization and international law, actually undermine and paralyze these institutions and ultimately contribute to the international system’s instability.

Now, the arguments put forward by those who oppose intervention in solidarity with Libya leaves me unconvinced, certainly unsure, doubtful.

It’s not Libya’s oil that’s a big deal here—its output is small, including its impact on world markets, though this doesn’t exclude the commodity traders’ hoarding and driving up the price. It’s primarily U.S. fear of al-Qaida Africa setting up shop in a large, empty, and in some measure tribal country that, if fragmented by protracted insurgency could lead to a trans-national terrorist presence.

Presenting itself as a still relevant player and leader may well be an additional reason. Europe has similar concerns, but its primary one is the fear that a state without a single, central government fully in control of its territory, opens the way for floods of migrants from Africa, Muslim and otherwise, who use Libya as a transit camp.

True, this is actually Europe’s problem, not ours. Except that Washington and the national security planners cannot countenance the thought that they are not in control of events such as this.

The Europeans aren’t twisting our arms. (I would have preferred, for the good of the American people, that the U.S. stayed out.) Still, my sense is that the last thing the US wants is a protracted, costly intervention—another war to get involved with.

Its domestically, economically, and politically unaffordable, untenable, and unsustainable. If nothing else, we’re virtually bankrupt. I also think that both the US and its Western allies would like to see a short campaign in which the rebels win and they can leave. This inherent hesitance may explain the confusion and apparent contradiction of Obama administration statements regarding the purpose and parameters of the mission.

I for one don’t see much US advantage in intervening, especially in light of our grave economic troubles and involvement in two wars. So no, I doubt there’s a “bad” hidden reason for US action, nor do I think it’s motivated by either regime change or dictating a post-Qadhafi government and order.

I don’t see a convincing argument for this thesis. Nor do I see the will or capability for it. After all, my primary criterion for great power intervention in the affairs of weak states is whether, in fact, it’s on the side of the people or the state (though I am mindful that, even when this, rarely, happens it produces a horrible mess and a bigger humanitarian crisis).

Also, we all know the lies and deception that got us into Iraq and the consequences of this on not only Iraq but also Afghanistan and Pakistan, which have been destabilized and their peoples made to suffer mightily in the single-minded pursuit of fighting “terrorism” and “fundamentalism.” Libya doesn’t present the conditions or motives for the cynical self-interest intervention thesis.

Asli U. Bali and Ziad Abu-Rish advance an articulate argument (“Solidarity and Intervention in Libya”)—written before UNSC resolution 1973 authorizing a no-fly zone for protection of civilians—against intervention. In their list of problems, they cite the reality that intervention may not tip the balance of power against the regime, that it causes lots of civilian casualties, that a no-fly zone is essentially about regime change and not humanitarian intervention, and that it usually benefits the interveners’ strategic and economic interests rather than the people.

Their main concern is that a no-fly zone that would necessarily require attacks on runways, radar, command and control centers, and artillery installations will kill innocent civilians. After all, they say, Qadhafi possesses mainly helicopter gunships, armor, and artillery. And the fact that the Libyan opposition is not clearly known and whether they represent the wider demands of the Libyan people, makes intervention that much more problematic. Under the strict principle of “do no harm” they conclude that only two things can be done: provide medical supplies, food, and clean water and open up a corridor for civilian refugees to flee to Europe.

Ideally, it would be great if the supine and hypocritical Arab League is composed of democratic states that have on the ready a rapid deployment force for just such an occasion. In Libya, the country could very well end up divided between Tripoli and surroundings under Qadhafi and company and the remainder under a new government. But what to do, if not even the minimum of arming the rebels?

The thing is, it seems, and one logically and intuitively adduces, that the vast majority of Libyans are for intervention, whether or not their Benghazi-located transitional leadership purporting to speak on Libyans’ behalf, is clearly differentiated or well known.

The Arab League’s complaint, after the bombings, that they were supposed to protect not harm civilians seems rather disingenuous, especially coming from member states the vast majority of whom are great violators of the rights of their people.

Did not Arab League Secretary General Amr Moussa know that a no-fly zone requires bombing preparations to clear the skies of hostile aircraft? It’s either this or actual military intervention on the ground. Should the coalition leave Qadhafi’s armor and artillery free to march on and mercilessly pound Benghazi? In any case, why approve intervention via a no-fly zone if you already know that Qadhafi’s “air force” is not the problem for the insurgents?

Hypothetically, I’d welcome a no fly-zone (or some military intervention) imposed on Israel to prevent its savagery in Gaza even though I know this may entail civilian Palestinian (and Israeli) casualties.

It’s either this or the indiscriminate mass casualties that is Israel’s specialty, as it is Qadhafi’s. Yes, military intervention may prove more inimical to the people it’s supposedly trying to rescue, and yes, the history and motives of Western intervention is morally wretched, usually in the service of maintaining autocratic clients and pushing back “people power.”

And no, the US will not consistently (actually, hardly) support democratic movements even though this is the key to its prestige and influence in the Middle East and elsewhere. But there is something different in this Libyan context. The Libyans’ need for help tips the balance towards a moral case or if not this, a utilitarian one, regardless of the motives of those intervening.

It isn’t obvious or inevitable that intervention will prevent the Libyan people from determining their future or that it will undermine the unfolding Arab democratic movements or cause anti-Western sentiment. (Nor that intervention may have prolonged Qadhafi’s stay because it precluded a negotiated exit.) The Arab democrats, including Libyans, are sophisticated enough to parse the nuances and know when enough is enough and the Western powers are keen on not being seen as imperialist aggressors of old.