The Overwhelming Spiritual Weight of ‘Nakba’ 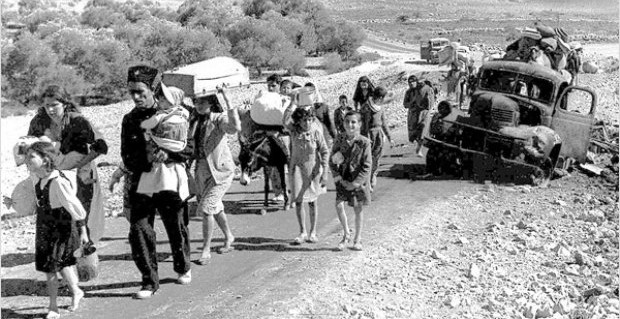 My first day in Jerusalem, I discovered that my roommate in the institute where I stay is a Palestinian-American scholar I’d met 5 years ago in New York. He made me tea and we sat outside in the sun, and he described the explosive feelings of finding his great-grandfather’s grave that day and about filming his father’s former house in West Jerusalem so as to share it with his father overseas.

That night I went to dinner at a good friend’s house here in East Jerusalem. His mother told me a story about visiting the house she had grown up in a few miles away in West Jerusalem with an Australian film crew, and being scolded by the house’s present owner—no Palestinians ever lived there. She pressed the address on me, and asked me to visit for her.

Her son had got out cognac, and he wanted to show me a video. He grabbed the remote and put on a youtube of Marlon Brando’s 1973 Oscar for the Godfather—when Sacheen Littlefeather in Apache dress declined the award on Brando’s behalf because of Hollywood’s portrayal of Native Americans. (You can watch it here.) “Isn’t that cool?” he said.

I always find Nakba consciousness shocking. Though I’ve written about the conflict for several years, I still have little sense of the Nakba in all its emotional and spiritual weight. Then I come here and I’m reminded that it is a living memory and huge historical burden– made more burdensome by the fact that no one in the official west recognizes it. While for Palestinians, it is the event that defines their experience.

Yesterday, reflecting that I know little about Palestinian history, I picked up the late Shafiq Al-Hout’s book My Life in the PLO, published last year, and had only gotten to the second paragraph when the Nakba entered: “There is no precedent in history for what Zionism inflicted on Palestine and the Palestinians… Any group of human beings which experiences a crime on this scale, and lives to tell the tale, is left with marks and scars which are hard to ignore and impossible to forget.”

Or as Ali Abunimah said at the Penn BDS Conference 2 weeks back, he feels urgency about the conflict because his parents’ generation, the generation that experienced the Nakba, is beginning to die out without seeing even a shadow of justice.

I’m not talking about the politics of the conflict, I’m talking about the spiritual truth of it. When I hear these stories, I always think about how I would have responded, or my parents, to being thrown out of our town. And even if the next generation in our family achieved high education in the States–well that experience would still define our lives, we would want to go back. And our community would embrace a policy of resistance to whatever state now existed there.

You can say, well that is the Palestinian narrative, and of course it is. You can say that 1948 has been made more resonant because of the failure of the 1967-based peace process. I guess that is true, too. But until the Nakba is widely acknowledged there will be no way forward in this conflict.

The United States is thoroughly engaged in the business of Nakba denial. When Robert Kaplan writes in The Arabists that the formation of Israel was a great liberal achievement, he demonstrates blindness to non-Jewish suffering. This view– or non-view– is widely shared in the United States establishment, It guaranteed that the United States would do nothing about the refugee issue in the 50s and 60s when the world said they must return. And today the blind insist on describing all forms of violent resistance to occupation as terrorism when god only knows what Americans would do if they were forced out of their homes and into the hills. We saw the same blindness about Israel’s righteous birth when Walt and Mearsheimer wrote that the foundation of the state of Israel involved questionable moral undertakings. The statement was landed on as proof of the authors’ alleged anti-semitism.

Overcoming these attitudes in the States is a Jewish assignment. Before the Penn BDS conference earlier this month, the Jewish Federations held an anti-boycott meeting, at which Alan Dershowitz reportedly told a young Jew who asked, But didn’t we throw them out of their houses, that this was not true. The land was barren, and the displacement of the peasants was only what any other country has done to get itself up on its feet.

It took Americans 30 years to begin to come to terms with the Holocaust. It is taking more than 60 to grapple with the Nakba. But things are changing, and before long we will study the Nakba’s connection to the Holocaust and colonialism, and to pogroms and Jewish landlessness. Nakba studies will become a field of Jewish inquiry, in Hebrew schools, in synagogues and in universities. There is no other way. Some memories are ineradicable.

2 Responses to The Overwhelming Spiritual Weight of ‘Nakba’