The Morality of Killing: What’s So Special About Drones? 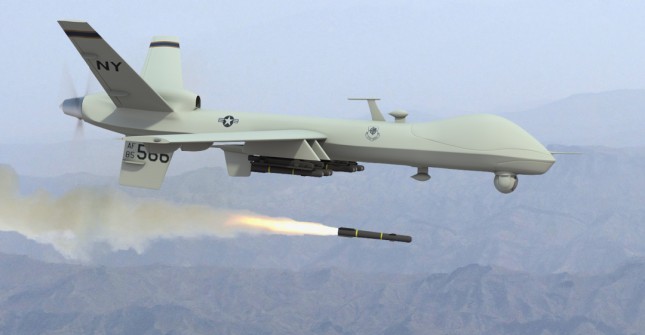 One of the interesting comments that arose out of the recent Pakistani elections came from an unnamed aide of Nawaz Sharif. The Prime Minister-elect had been campaigning on the basis that the US use of drones in Pakistan was an infringement of sovereignty, and that he would put an end to the attacks. His aide came out with words to the effect that in politics one says one thing for public consumption, but implementation was quite another matter.

Which brings to mind Barack Obama’s unequivocal commitment to close Guantanamo. I’m not saying that Obama and Nawaz were anything less than sincere in their public commitments. But at the risk of stating the obvious, doing is often far harder than saying.

On the drone issue it’s not hard to argue that the attacks – which have killed over 3000 people during Obama’s presidency, many of them people who played no part in the conflict in Afghanistan and Pakistan – are wrong. At the very least, it’s wrong to kill innocent people, either in war or in the warlike act of counter-insurgency.

Supporters of drone warfare would argue that targeted strikes are better than area bombing, even if they kill innocents from time to time. But they are not the ones whose families are at the wrong place at the wrong time. More likely they are people who know people who were killed on 9/11, or by an IED in Helmand or Anbar. Or people who believe that the national interest of protecting their fellow citizens trumps all moral concerns about inflicting “collateral damage” on populations thousands of miles from their homelands.

One wonders how opponents of drones in Pakistan would feel about their use in destroying insurgents who were threatening their personal livelihoods and killing their loved ones with indiscriminate suicide bombings if the drones were controlled by their own government? Would they feel that collateral damage was the price to be paid for the greater good of the nation?

Would they blame the Saudis for being complicit in the drone attacks that destroy innocents in Yemen in the effort to wipe out Al-Qaeda in the Arabian Peninsula and eliminate the threat to their own people and to the Saudi regime? Especially as the political and spiritual predecessors of AQAP brought destruction and death to hundreds in the sacred confines of the Grand Mosque in Makkah 34 years ago?

Indeed, is there anything unique in drones as a weapon of war – except in the sense that they are highly effective? Should we see their use as more reprehensible than any other act of war resulting in the death of non-combatants? Worse than poison gas in Halabja, nuclear detonation over Hiroshima and fire-bombing in Dresden?

Those of us who don’t have to make personal decisions to engage in acts of war are free to debate the morality of killing. It’s easy for us to deplore the deaths inflicted by our military at the behest of our rulers, and to declare “not in my name”, until we are confronted with the need to make a personal decision that might lead to the death of another. To kill someone who wants to kill us or our loved ones, for example. Soldiers cross that threshold when they join the military. Rulers and politicians, I suspect, tend to cross the bridge when they come to it.

I often wonder what goes through the minds of people like Tony Blair and Barack Obama when they realise that there is a choice to be made between whatever moral scruples they have and what they believe is the necessity to sanction the killing of others. A choice between the Abrahamic commandment not to kill the innocent, and the expediencies of national interest and personal career preservation. When the heart finally has to deal with what the mind has determined.

As a friend of mine who has direct experience of combat has pointed out, there is a world of difference between the split-second decision on the ground about whether or not to kill, and the bureaucratic process that leads to the launch of a missile from a drone. In the latter situation those who pass the message down the chain of command to the person who presses the button have resort to the Eichmann defence – “I was only following orders”. They do not have to witness the results of their participation in the process.

Does that make drone attacks more likely? Possibly. Do they lead to mission creep? Probably.  Are mistakes resulting in innocent casualties likely to defeat the wider objectives of drone campaigns? That’s the big question, which can only be answered in the context of the objectives.

One thing seems clear to me. In the minds of the decision makers, morality does not come into the equation – only expediency. Politicians and rulers  – whether or not they protest otherwise – cross the Rubicon dividing morality from expediency when they assume direct responsibility for giving the orders.

And if you are a person with strong ideals and a well-developed moral code, as I believe both Blair and Obama were when they went into politics, you have to live every day with the consequences of the moral compromises that come with your job. Whether or not you sleep easily depends upon how you reconcile your moral code with the decisions you have to make.

From the standpoint of expediency, I for one believe that without reliable intelligence, drones will never stop insurgencies. Far from being smart weapons that only take out the bad guys, they will only be effective if they are matched with equally sophisticated intelligence on the ground. And that would appear to be the component that is lacking. If drones could hear as well as see, then perhaps less innocents would end up in the cross hairs.

Drones are usually sent after targeted groups and individuals – “persons of interest”. In other words, they are weapons of assassination. When they kill innocents, is it any wonder that others who lack sophisticated weapons feel no compunction in doing the same with their car bombs, IEDs and suicide vests?

That’s the big flaw in the expediency argument. As for morality and ethics, well, I guess it depends how close you are to the explosions, and where revenge, forgiveness, love and hatred are to be found on your emotional map.