The History of Palestine: ‘We Must Seize Our Narrative’ 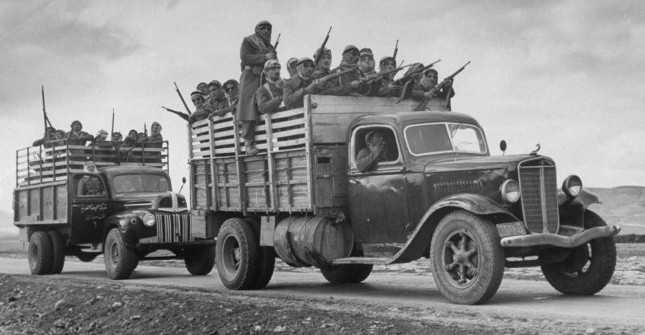 Nearly two weeks ago, Palestinians around the world commemorated the Deir Yassin Massacre which took place on April 9, 1948. In Palestinian consciousness, the massacre which claimed the lives of more than 100 innocent people, epitomised the ugly face of Zionism — the ideological foundation upon which the state of Israel was established. Over the years, the haunting memories associated with Deir Yassin morphed beyond its immediate representation as a deliberate criminal act aimed at achieving political ends and survived as a permanent scar in the centre of a collective memory that is heavy with many Deir Yassins.

While Deir Yassin — in both actuality and political representation — remains a crucial component in the Palestinian struggle for freedom, the history in which the massacre was a part continues to be subject to academic and media biases, if not outright racism.

Deir Yassin is largely admitted in Israeli and western thinking because Zionist leaders at the time wished to highlight it as a successful scare tactic to drive hundreds of thousands of Palestinians off their land. However, other massacres that were committed by Zionist forces during the Palestinian Nakba (Catastrophe) hardly register in Israeli or western awareness about Palestine and its blood-soaked history, for the stories of these massacres were told mostly by Palestinians alone. It is a manifold tragedy where neither the victim obtains justice nor is her victimisation acknowledged for what it was or is. Many massacres of Palestinians are hidden beneath the fact that unless they are recognised by Israeli historians, to western audiences they never happened.

Only when Israeli journalist Amir Gilat chose to run a story in the Ma’arive newspaper a few years ago, citing the research of Israeli post-graduate student Theodore Katz, did western media acknowledge or at least agree to discuss the Tantura massacre. It mattered little that the descendants and relatives of the 240 victims of that grief-stricken village who were killed in cold blood by Alexandroni troops, never ceased remembering their loved ones.

And 65 years into the Zionist conquest of Palestine and the start of the “Palestinian refugee problem” — which could also be read as genocide by those undaunted by Israeli-western sensibilities — Palestinian history is still filtered by the same mechanisms that existed decades ago. However, it is time for the right to credible narration, which has been largely reserved for Israeli historians, to be challenged and unapologetically so.

If one delves deep into Palestinian historical text, one is stunned by the authentic history of the Palestinian people, their many tragedies and also its voluminous fascinating accounts of a deep-rooted civilisation that is unsurpassed in its uniqueness and historical continuity. However, Palestine’s representation, or misrepresentation, exists in western academia, media and even popular imagination through the carefully tailored “knowledge” that Israeli narrators have kindly decided to endow upon them. Remove the Israeli link to western understanding of everything Palestinian and you will find an empty space of disconnected text that does not have much in terms of an alternative discourse.

The case of Deir Yassin was largely accepted as a massacre because Israeli historians such as Benny Morris — a reasonably honest researcher who remained committed to Zionism despite the ghastly history he had himself uncovered — had agreed to its existence as a historical fact: “Whole families were riddled with bullets … men, women, and children were mowed down as they emerged from houses; individuals were taken aside and shot. Haganah intelligence reported ‘There were piles of dead. Some of the prisoners moved to places of incarceration, including women and children, were murdered viciously by their captors …’”

It was the Irgun Zionist militias of Menachem Begin and the Stern Gang (Lehi), led by Yitzhak Shamir, that took credit for the infamy of that day — and both were rewarded generously for their atrocious acts. In fact, the once wanted criminals rose to prominence to become prime ministers in later years.

Tantura had a good chance to advance from being a mere Palestinian fiction into an authentic history because an Israeli student decided to challenge the official discourse of his country, which insists on portraying Israel as an oasis of democracy and historical purity.

The numerous villages and their inhabitants that were subjected to the genocide of 1948 (known in polite circles as “ethnic cleanings”) failed to make the historical cut, as if they continue to wait for an Israeli historian to make his move and validate the claim that they had in fact taken place.

In a recent conversation, Dr Salman Abu Sitta, one of Palestine’s lead historians on the Nakba, said: “The irony is that what the suspect Benny Morris and the respected Ilan Pappe wrote recently is what the Palestinians have been saying for over six decades. The Zionist-dominated media was deaf and dumb. Orientalism at its worst.” Indeed.

The issue, however, is as relevant today as it was 65 years ago. The descendants of those who survived the 1948 Nakba and the subsequent wars and massacres are mostly refugees in Palestine itself or throughout the Middle East and the rest of the world. Neither did their ancestors receive justice, nor have the current generation attained restitution. From Deir Yassin to Tantura, from Ain Al Hilweh to Yarmouk and Jabaliya, the scale of the suffering is equal and undying.

But it must change. Without an authentic, unadulterated Palestinian narrative, no true, genuine understanding of Palestine and the Palestinian people — even by those who are considered sympathetic with the Palestinian cause — can ever be achieved. A narrative that is centred on the stories reflecting history, reality and aspirations of ordinary people will allow for genuine understanding of the real dynamics that drive the conflict. This narrative that defines whole generations of Palestinians are powerful enough to challenge the ongoing partiality and polarisation.

Deir Yassin should be as relevant to the present, as it is essential to unravelling the past. Not only were there many Deir Yassins carried out in one form or another, but Deir Yassin is also a microcosm of a much larger drama that continues to play out in Palestine until this day. If the original Deir Yassin (and many other massacres) is flouted as non-relevant historical anomaly, then the present shall also continue to be tainted and misunderstood.

It is time for Palestinian historians to step forward and claim what is essentially their narrative, challenging media bias and boldly pushing beyond the certified boundaries of the Israeli, thus western intellectual chokehold on the Palestinian discourse.

2 Responses to The History of Palestine: ‘We Must Seize Our Narrative’