The Hateful Ideology Behind the Norway Massacre 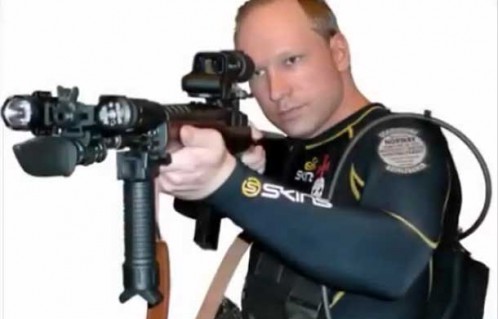 Details on the culprit behind Friday’s massacre in Norway which saw car bombings in Oslo and a mass shooting attack on the island of Utoya that caused the deaths of at least 91 people, have begun to emerge.  While it is still too early for a complete portrait of the killer, Anders Behring Breivik, there are enough details to begin to piece together what’s behind the attack.

Although initial media reports, spurred on by the tweets of former State Department adviser on violent extremism Will McCants, linked the attacks to Islamist extremists, it was in fact an anti-Muslim zealot who committed the murders.  An examination of Breivik’s views, and his support for far-right European political movements, makes it clear that only by interrogating the nexus of Islamophobia and right-wing Zionism can one understand the political beliefs behind the terrorist attack.

Breivik is apparently an avid fan of U.S.-based anti-Muslim activists such as Pamela Geller, Robert Spencer and Daniel Pipes, and has repeatedly professed his ardent support for Israel.  Breivik’s political ideology is illuminated by looking at comments he posted to the right-wing site document.no, which author and journalist Doug Sanders put up.

Here’s a sampling of some of Breivik’s comments:

And then we have the relationship between conservative Muslims and so-called “moderate Muslims”.

Now it unfortunately already cut himself with Marxists who have already inﬁltrated-culture, media and educational organizations. These individuals will be tolerated and will even work asprofessors and lecturers at colleges / universities and are thus able to spread their propaganda.

For me it is very hypocritical to treat Muslims, Nazis and Marxists differ. They are all supporters of hate-ideologies…(page 2-3)

What is globalization and modernity to do with mass Muslim immigration?

And you may not have heard and Japan and South Korea? These are successful and modern regimes even if they rejected multiculturalism in the 70’s. Are Japanese and South Koreans goblins?

Can you name ONE country where multiculturalism is successful where Islam is involved? The only historical example is the society without a welfare state with only non-Muslim minorities (U.S.)…(page 7)

We have selected the Vienna School of Thought as the ideological basis. This implies opposition to multiculturalism and Islamization (on cultural grounds). All ideological arguments based on anti-racism. This has proven to be very successful which explains why the modern cultural conservative movement / parties that use the Vienna School of Thought is so successful: the Progress Party,Geert Wilders, document and many others…(page 13)

I consider the future consolidation of the cultural conservative forces on all seven fronts as the most important in Norway and in all Western European countries. It is essential that we work to ensure that all these 7 fronts using the Vienna school of thought, or at least parts of the grunlag for 20-70 year-struggle that lies in front of us.

To sums up the Vienna school of thought:

– Defender of the cultural aspects of Christianity

Daniel Pipes: Leftism and Islam. Muslims, the warriors Marxists Have Been praying for.

The following summarizes the agenda of many kulturmarxister with Islam, it explains also why those on death and life protecting them. It explains so well why we, the cultural conservatives,are against Islamization and the implementation of these agendas… (page 27)

We must therefore make sure to inﬂuence other cultural conservatives to come to our anti-rasistiske/pro-homser/pro-Israel line. When they reach this line, one can take it to the next level…(page 41)

Breivik’s right-wing pro-Israel line, combined with his antipathy to Muslims, is just one example of the European far-right’s ideology, exemplified by groups such as the English Defense League (EDL).  The EDL, a group Breivik praises, along with the anti-Muslim politician Geert Wilders, share with Breivik an admiration for Israel.

Anti-Muslim activists and right-wing Zionists share a political narrative that the Israeli/Palestinian conflict is a “clash of civilizations,” one in which Judeo-Christian culture is under attack by Islam.  Israel, in this narrative, is the West’s bulwark against the threat that Islam is posing to Europe and the United States.  The nexus of Islamophobia and right-wing Zionism was clearly on display during last summer’s “Ground Zero mosque” hysteria, which culminated in a rally where Geller and Wilders addressed a crowd that included members of the EDL waving Israeli flags.

This comment by Breivik is one example of the twisted way in which Islamophobia and a militant pro-Israel ideology fit together:

Cultural conservatives disagree when they believe the conﬂict is based on Islamic imperialism,that Islam is a political ideology and not a race.

Cultural conservatives believe Israel has a right to protect themselves against the Jihad.

Kulturmarxistene refuses to recognize the fact that Islam’s political doctrine is relevant and essential. They can never admit to or support this because they believe that this is primarily about a race war – that Israel hates Arabs (breed).

Most people here have great insight in key Muslim concepts that al-taqiiya (political deceit), naskh (Quranic abrogation) and Jihad. The problem is that kulturmarxister refuses to recognizet hese concepts.They can not recognize these key Muslim concepts. For if they do so erodes the primary argument that Israel is a “racist state” and that this is a race war (Israelis vs. Arabs) and not defense against Jihad (Kafr vs. Ummah)

Breivik’s admiration for the likes of Daniel Pipes is also telling, and should serve as a warning that, while it would be extremely unfair and wrong to link Pipes in any way to the massacre in Norway, Breivik’s views are not so far off from some establishment neoconservative voices in the U.S.  For instance, both Pipes and Breivik share a concern with Muslim demographics in Europe.  In 1990, Pipes wrote in the National Review that “Western European societies are unprepared for the massive immigration of brown-skinned peoples cooking strange foods and maintaining different standards of hygiene…All immigrants bring exotic customs and attitudes, but Muslim customs are more troublesome than most.”

Pipes was appointed by the Bush administration to the U.S. Institute of Peace, and sits on the same board than none other than the Obama administration’s point man on the Middle East, Dennis Ross.

Pipes’ and Breivik’s concern about Muslim and Arab demographics also recall the remarks of Harvard Fellow Martin Kramer, who infamously told the Herzliya Conference in Israel last year that the West should “stop providing pro-natal subsidies for Palestinians with refugee status…Israel’s present sanctions on Gaza have a political aim, undermine the Hamas regime, but they also break Gaza’s runaway population growth and there is some evidence that they have.”

Adding to the Israel/Palestine angle here is the fact that the day before the attack on the island of Utoya, a Palestine solidarity event was held there.

Why Breivik, and his accomplices if he had any, would attack young Norwegians remains unclear.  But it probably had something to do with Breivik’s belief that European governments, and the Norwegian government, were run by “Marxists” allied with Islamist extremists who were bent on destroying Europe through “multiculturalism.”

Of course, support for Israel and its current right-wing policies do not automatically translate into support for extremist right-wing violence.  But Palestinians, and the larger Arab and Muslim world, know far too well the consequences of Islamophobia and far right-wing Zionism.  Now, it seems that Norwegians do too.  While much remains to be learned about the attacks in Norway, it has exposed the dangerous nexus of Islamophobia, neoconservatism and right-wing Zionism, and what could happen when the wrong person subscribes to those toxic beliefs.

One Response to The Hateful Ideology Behind the Norway Massacre