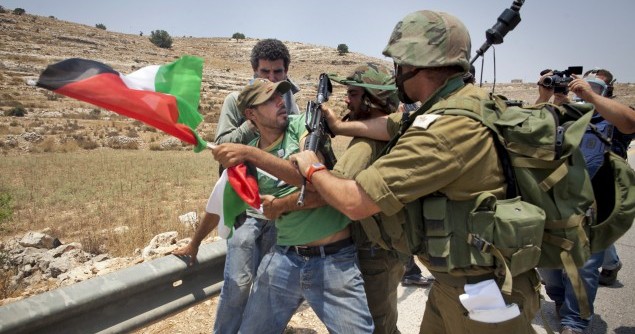 During the violence between Gaza and Southern Israel last month, I was shocked that some of my friends were posting images on Facebook that supported the disproportionate force Israel used against Gazans. When I asked why, they all believed that Palestinians wanted to wipe out Israel. Their most primitive instinct was activated: that of self-preservation. During Israel’s attacks, the same basic instinct was activated among Gazans.

This level of fear distorts our thinking and locks us into an ever-repeating pattern of attack and counter-attack. Only evidence that the “other” is like us can disrupt the cycle of violence. In order to find evidence we need the courage to look.

In July 2010, a Palestinian artist invited a Jewish artist she had worked with in the United States to give a lecture at Al Quds University in the West Bank. My Israeli-Palestinian friend Rema and I had worked in Arab-Jewish relations in the 80’s with the Jewish artist, and we accompanied him to hear his talk about the legacy of trauma connecting his history of suffering with the Palestinians.

The Palestinian artist was clearly anxious about the event she had initiated. She reluctantly agreed to drive us through the checkpoint since it’s illegal for Israelis to cross. As we approached the border to the West Bank, she warned us not to speak in Hebrew.

During the lecture, the artist shared his background, which included living for a year in an Israeli Arab village after serving as a soldier in the Israeli army. The tension in the room was dizzying. Some students nervously tapped, while others played with their mobile phones. I imagined them texting to inform others there were Jews and Israelis in this room and that people would come to hurt us. I trusted those in the room, the art students, whom I had met just ten minutes prior, but I feared those outside it. I found the texting, a secret communication with people I couldn’t see, quite terrifying.

At the end of the lecture, students crowded around the Jewish-Israeli artist wanting to engage not about his art but on a more intimate level. The first woman to speak said, “I don’t believe you killed anyone.” Another woman started to speak in Hebrew, telling the artist she wanted to practice. They had never had an open conversation with a person who had been an Israeli soldier. His trust in them was infectious. They had done what they had thought impossible – they had allowed themselves to care for an ex-Israeli soldier. It was surprisingly easy because it was so clear he cared about them.

We had travelled far to get to this place of togetherness though it was not even an hour’s journey from Jerusalem. We suppressed our fear and moved out of our comfort zone to learn that what we believed was true: that despite warnings to the contrary, we could trust these people to keep us safe.

Since the revolutionary internet movement “Israel Loves Iran,” began last spring, people don’t have to clandestinely travel across borders to discover their wish for peace reflected in the faces of “enemies”. On the recent offshoot Facebook pages – “Palestine Loves Israel” with over 9000 members and “Israel Loves Palestine” with about 7000 members – Israelis and Palestinians, among others, have posted their photos with the phrase: “This is not my war. I want peace and love among Palestine and Israel. We are all one.”

Generations of political leaders have vilified an “other” to garner power. We can use social media to either promote their agenda of fear and hate or create our own of curiosity and acceptance.

Thousands of people are reaching across borders electronically to make it clear that their politicians are not speaking for them. The Internet is proving instrumental in helping people overcome their programmed fear of the “other” to understand that many people, both Palestinian and Israeli, just want to find a way to live together. The “Gaza Youth Breaks Out” Facebook group posted a picture of an Israeli rally in support of UN observer status for the state of Palestine. On Facebook, Gazan youth thanked those Israelis.

Only by fighting fear instead of each other can Palestinians and Israelis shift the power from those who are not yet ready for peace to those who are making it.

Ariel Katz is an American living in England. She studied Middle Eastern Studies at Cornell University in New York, and lived in Israel for three years working in Arab-Jewish relations. Her blog is at http://modernnomad-teals.blogspot.co.uk/.