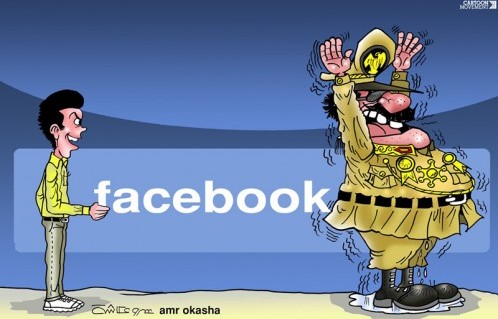 If there is one event or series of events or region that has fuelled the debate about the impact on policy and policymaking as well as on social movements and protest of technology in general and social media in particular, it is the Arab revolt that has been sweeping the Middle East and North Africa since December.

Many have dubbed the popular revolts in Egypt and Tunisia the Facebook revolution. Indeed, in Syria social media and mobile telephony play a key role in circumventing news blackouts and censorship to get news of the brutal crackdown by the government of President Bashar al Assad to the outside world.

Yet, despite the perception of many, it is not technology that is sparking the revolts. No doubt technology helps, facilitates and accelerates the speed and breadth of communication. New technology and social media impact politics, social movements, communications and flow of news. But the question one has to ask oneself is whether the Arab revolt would have erupted without Facebook and I would think that the answer to that question is a resounding yes. To dub the Arab revolt a Facebook revolution would require revisiting our explanations and understanding of past revolts starting just over the last century Russia and moving on to Iran, the Philippines and for example Indonesia.

To be sure, technology plays a role and indeed a very important role in protest and revolt. In Iran in 1979, it was the cassette that helped Ayatollah Khomeini to gain and wield power and inspire millions to overthrow the Shah, at the time one of the most powerful symbols of US influence in the region In the very initial phase of Tunisia in December it was the mobile phone video of a young many whose humiliation by the regime of President Zine el Abedine Ben Ali persuaded him to set himself on fire that sparked the protests that led to the president’s downfall.

Cassettes and mobile telephony are technologies that autocrats understand by and large. Social media, however, is in many ways a game changer, primarily because it involves a degree of engagement and connecting with one another that works in thefavour of activists. Activists employ the medium at a time that autocrats have ignored it and failed to understand its power.

Social media constituted and constitutes a window of opportunity for activists. But even when autocrats attempt to engage, they are up against people who understand social media and its opportunities in ways autocrats have yet to grasp and structurally will find difficult if not impossible to grasp. Social media changes in ways earlier technologies did not the way one has to manage communications and public affairs, particularly in a crisis.  That requires a degree of sophistication that many but particularly inflexible, ossified autocratic governments  often find difficult, if not impossible, to marshal. In fact, marshaling that degree of sophistication would mean a far more far-reaching revision of the way most autocrats do business, a skill Arab autocrats certainly have yet to put on display.

Perhaps most frustrating and most fundamental to autocrats is the fact that the combination of mobile telephony, the Internet and social media has rendered censorship futile. It fundamentally changes the ground rules of communications policies. It turns the shaping of the narrative into something much more complex, in which governments and institutions, autocratic or not have to engage in ways they did not have to in the past. For one communication has truly become a two-way street. Shaping the narrative no longer means control, instead it means engagement.

And that is an approach that in the best of circumstances is a difficult one. That is  certainly true for autocrats, particularly embattled ones. It requires a mind shift few autocrats, certainly those that are on the defensive, can easily make. Just how difficult that process is evident in the problems the Western media have had in adjusting to technological change. It took the media years to understand that format shapes content, that when several years ago broadsheets moved to tabloid formats, the nature of the story changed. Similarly, simply moving the print edition of newspapers lock, stock and barrel on to the Internet was not a workable formula.

It failed to recognise changes in terms of interactivity and the way news is consumed and the changing expectations the public empowered by new technology has of what news organisations offer. As a result, governments and institutions irrespective of the political environment they operate in have to rethink the way they approach communications. They have to pay greater attention to the way they project themselves, their policies and the way that they relate to the public in a new and increasingly complex communications landscape. It also means that, ultimately, governments and institutions will have to become more attentive to public opinion, because whether or not that opinion is blocked from being expressed, it is still there.

The world looked to the Arab street in the wake of 9/11 for change that would eradicate the feeding ground on which extremism feeds. When the Arab street did not come through, government officials, analysts and journalists wrote the Arab street off. Fact of the matter is, widespread discontent continued to simmer at the surface. One only needed to put one’s ear to the ground. If the current Middle Eastern revolt or series of revolts and its embracement of technology teaches us anything, it is that where discontent exists but cannot be expressed openly, it will be expressed elsewhere in what constitutes a truer reflection of reality. It is a reality enhanced but not sparked by technology that one ignores at one’s peril.