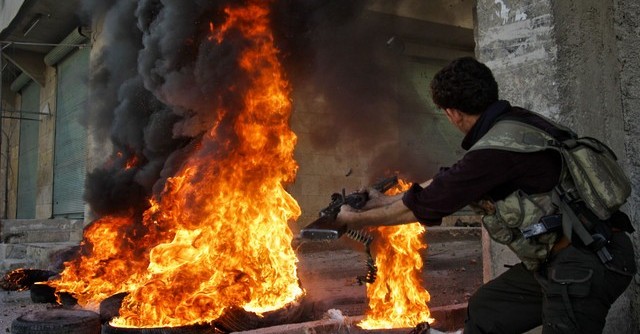 A land that has been fought over by Egyptians, Hittites, Babylonians, Canaanites, Judeans, Samaritans, Greeks, Phoenicians, Romans, Persians, Arabs, Franks, Turks, Mongols, British, French and Israelis. Not necessarily in that order, and in the case of some of the combatants, more than once.

Home to a variety of Muslim sects and Christian churches, not to mention a substantial community of Druze. A highly diverse gene pool, some with red hair and green eyes, others with fair hair and blue eyes, others with darker complexions, dark hair and brown eyes, much like their cousins to the South.

Unwilling hosts to foreigners from many different lands, from Britain to Yemen to Chechnya. Hosts and guests pounding each other with weapons from Russia, Libya, Saudi Arabia, Qatar and any number of other origins.

Three thousand years of civilisation being reduced to rubble by high explosives. 600,000 refugees according to the UNHCR. Perhaps double that amount that have fled their homes, according to the European Union. 90,000 killed, countless more injured.

That’s approximately 10 people killed and 75 new refugees in the time it will take me to write this post. The batteries of hatred are being re-charged for another few generations.

All around the borders of this tiny land and in countries far away, rulers, politicians and generals make calculations that shift with each atrocity and change of fortune on the battlefield.

While the Syrians keep dying.

America’s leaders are afraid of appearing weak. Red lines dematerialise. For them, the conflict is framed around the prospect of a weakened Iran and a neutralised Hezbollah. But weapons now being smuggled into the country can shoot down airplanes. A new generation of jihadis is earning its spurs, ready to take the fight once again to America’s shores. And proliferation of the conflict into the oil-rich areas may not overly affect America in its second age of Big Oil, but would certainly destabilise the world economy, with a serious knock-on effect on America’s tenuous recovery.

Great Britain is struggling to maintain its influence on the world stage. It too fears arms proliferation and an escalation of the conflict. It worries about its Muslim youth flocking to join the jihadi brigades, and then returning to the UK to wage war against the state in the name of a notional Caliphate.

The Gulf States are anxious to neutralise Iran and its proxies in Yemen, Iraq and Lebanon. The weapons that Saudi Arabia and Qatar feed into the conflict are reaching groups who might conceivably turn on their benefactors in the not too distant future. They would like to see a Sunni government in Syria, but not one run by liver-eating fanatics who kill children for insulting Islam.

Russia fears a blow-back from returning Chechen fighters. It is determined not to lose its only Arab ally, and especially its only deep-water Mediterranean base. Though successive revolutions created the modern Russia, its leaders are not keen to see the violent disruption of its client turf. Its leaders have a history of caring little about casualties – the country lost 20 million citizens in the Great Patriotic War while Stalin sat drinking vodka in the Kremlin.

Syria’s other neighbours have their own axes to grind. Jordan is buckling under the weight of the refugees, and fears the export of jihad into its own territory. Israel is happy to see its enemies consumed in an internecine meat grinder, but fears the prospect of Hezbollah acquiring potent new weapons to be deployed against it. Turkey fears the spread of the conflict across its borders. Yet perhaps more active intervention will give its Prime Minister a much-needed distraction from the increasing turmoil within – a similar accusation being levelled at President Morsi of Egypt. Lebanon faces the possibility of renewed factional and sectarian strife destroying the progress it has made since the end of its own bloody civil war.

For Iran the loss of its key ally Bashar Al-Assad would be a serious reverse. It would isolate its Lebanese proxy Hezbollah, and destroy its dreams of hegemony over a Shia crescent from Iran to Lebanon. It would enable its rivals to weaken and pick off the proxies it has spent decades building up. So it gives the nod as Hezbollah plunge into the fray alongside regime elements from its own armed forces that have been trying to plug the gap since 2011.

Of course these are just highlights. At a granular level the picture is richer, deeper and darker.

And the Syrians keep dying.

90,000 and counting.  Axes grind. Calculations are made, futile conferences are held, ending with empty communiques and humanitarian platitudes. While the rest of the world – those of us who don’t have to worry about national interest and take the time to look beyond our own bubbles of self-interest – looks on in impotent horror.

If the devil exists, then truly he is at work in Syria. He has created a fire of malevolence with enough fuel to last a lifetime.

So what can the Western stakeholders do? Create a firebreak in the fighting and impose a peacekeeping force by threatening Assad with unlimited arms and support to the rebels, thereby earning the enmity of those who support the agenda of the rebels? Let Assad regain control of his country in the interest of saving lives in the long term? Or stand by and let the combatants keep grinding away until another 90,000 lose their lives?

Perhaps an act of spectacular courage is required. Like the new President of Iran, Ayatollah Sistani of Iraq, the Grand Muftis of Saudi Arabia and Egypt, rising above their sectarian differences, going hand in hand to the battlefields, placing themselves between the combatants, and appealing to their consciences to end the fighting. After all, is not conflict between Muslims the fitna (chaos) they actively preach against in their own countries? And surely these are the people with the moral standing to make a difference?

All this is above my pay grade. I don’t have an army of advisors, and nobody is going to kick me out of office if I make the wrong decisions. All I know is that both sides in the conflict have carried out evil acts, and to supply either with more arms – whether or not politically expedient – is immoral, unless it contributes to the preservation of life, which arms rarely do.

The sad thing is that national and personal interest always trumps humanitarian instincts. And when parties are at war who value their cause above their lives – or at least above the lives of those they have put in the front line – they will usually have their way until the last man falls, and to hell with the consequences for the innocent bystanders. As in Lebanon. As in Libya. As in Iraq.

Saladin, who knew how to make peace as well as war, will be turning in his grave in Damascus – if it still exists. Some parts of the world are truly cursed.