The Demographic Timebomb of Palestinians in Israel 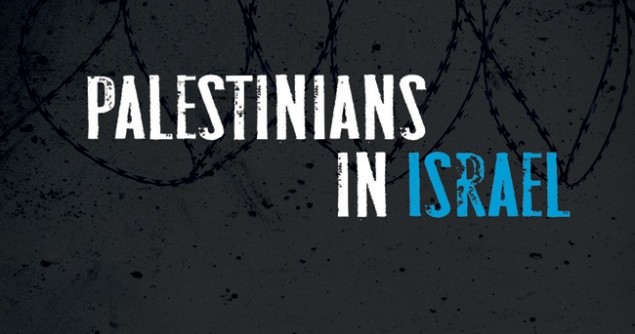 The horrendous reality of the Palestinian communities inside Israel—in places like Akka, Haifa, Nazareth, Yaffa, and the Negev—is not about being regulated to sit in the back of the bus; they could only wish for such blatant racism. Here, the racism is multilayered, ideological, well-camouflaged, state-sponsored, and non-stop. Anyone who thinks that resolving the Israeli military occupation in the West Bank and Gaza Strip would bring peace to the region would be well-advised to peel away the veneer of democratic façade, one that covers an Israeli plan with only one goal in mind: completing the campaign of ethnically cleansing Palestinians that started with the creation of the State of Israel.

Last week, on a beautiful fall day, I sat in a friend’s living room in a village at the northern tip of Israel, adjacent to the Lebanese border, in the part of Israel called the Galilee. This is where the Palestinian citizens of Israel are concentrated. Five generations of Palestinians were sitting in the room. As expected in Palestinian society, within no time, politics was the focus of the discussion. But this political discussion had a different twist from what most of those following this conflict are accustomed. The issues had to do with the Palestinian citizens of Israel and how the Israeli government systematically and structurally discriminates against them.

Bilateral negotiations between the Palestinians and Israelis, better known as the infamous Oslo Peace Process, began with a slogan (and accompanying actions on the ground) of Gaza and Jericho First. The idea was that the Palestinian Authority, which the Oslo Accords created, would start by being set up in the Gaza Strip and in the West Bank city of Jericho, a sort of pilot phase before subsequently deploying to all of the Palestinian areas defined in the Accords. The standing joke at the time was that what Israel, the military occupying power, really meant was Gaza and Jericho Only!

With 20 years of a never-ending “peace process,” Israeli misdirection diverted the world’s attention, including the Palestinian leadership’s, away from the discriminatory workings within Israel itself. As the parties quibbled over who violated the Oslo Agreement first and most, Israel never stopped strangling the Palestinian towns and villages inside it. More recently, even some of the mainstream, international research outfits, such as International Crisis Group (ICG), were forced to take note. Their March 2012 report titled, “Back to Basics: Israel’s Arab Minority and the Israeli-Palestinian Conflict,” stated:

“World attention remains fixed on the Israeli-Palestinian conflict but a distinct, albeit related, conflict smoulders within Israel itself. It might be no less perilous. Jewish-Arab domestic relations have deteriorated steadily for a decade. More and more, the Jewish majority views the Palestinian minority as subversive, disloyal and – due to its birth rates – a demographic threat. Palestinian citizens are politically marginalised, economically underprivileged, ever more unwilling to accept systemic inequality and ever more willing to confront the status quo.”

That’s researcher-talk for “A slow and calculated campaign of displacing an entire population in broad daylight—world, take note.”

As one travels northward in Israel, a stark reality cannot be ignored. Israel is empty. Most of the lands which comprise the State of Israel, as it is recognized worldwide, are empty of any population. The sad irony is that less than one hour’s drive north of where we were sitting, hundreds of thousands of Palestinian refugees, who, since 1948, have been prohibited by Israel from returning to their homes, dwell in squalid refugee camps, waiting for international law and UN resolutions calling for their return home to be respected.

Dr. Salman Abu Sitta, a Palestinian researcher with the Palestine Land Society, and a refugee himself, has extensively documented this phenomenon of empty lands in Israel, lands that Palestinian refugees call home. The undeniable fact is that allowing Palestinian refugees to return home would disrupt very little on the ground in Israel. It would, however, threaten the very basis of its existence as an exclusively Jewish state and create a demographic majority of Palestinians—a normal expectation, given that they were the majority in 1948 prior to being expelled.

Another startling realization, when traveling around the Palestinian farming villages in the Galilee, is that the hilltops are dotted with gated, Jewish Israeli communities and Israeli government-declared nature reserves, all creating a physical barrier to the natural growth of the indigenous Palestinian communities. Added to these physical obstructions to Palestinian development, Israeli law provides for another platform, a legal one, whereby hundreds of Israeli communities can keep out Palestinians on cultural grounds. Coming from the occupied territory of the West Bank, these physical obstacles and legal tools looked to me much like the illegal, Jewish-only settlements that surround every Palestinian city. The physical location of both types of these residential colonies is not random, but rather a sharp demographic weapon to interrupt and stunt the growth of the Palestinian communities.

While hearing the tribulations of Palestinian communities in Israel, I was reminded of another jarring fact: Israel detains and arrests Palestinians for their thoughts. One of the persons I was with, a 64-year-old man, was released a few years back after spending two years without charges in an Israeli prison. On my way home, I stopped in Haifa and, while speaking to a new business acquaintance there, he reminded me of another case: Ameer Makhoul, a Palestinian Christian citizen of Israel and the director of Ittijah, the Union of Arab Community-Based Associations, who, like so many others, is imprisoned in Israeli jails after an unfair trial aimed at striking fear into an entire minority community in Israel. Also, just as in the areas under military occupation, Israel tends an army of collaborators within the Palestinian communities to do their bidding for them.

I wanted to engage more, but had to head back home to the West Bank.

Now that I’m a Palestinian ID holder, which means I have West Bank residency status issued by the Israeli occupation authorities, I can’t be in Israel as a tourist. My U.S. citizenship—my only one—is useless now that I am classified as a West Bank Palestinian in the Israeli government’s eyes. Israel is the only place on earth where I can’t be an American! Thus, my Israeli military-issued permit, which allows me to enter Israel, restricts my movement so that I have to be back by 10 in the evening to what I call my cage, also known as the metropolitan area of Ramallah.

What is now clear to me, and wasn’t when I first arrived here shortly after Oslo, is that the system of command and control, which oppresses over four million Palestinians under military occupation, is strikingly similar to the system which controls over one million Muslim and Christian Palestinians inside Israel.

The Israeli goal is to erase Palestinian collective memory, limit Palestinian education, squeeze Palestinian living space, and strangle any serious notion of Palestinian economic enterprise. But Palestinians are not going anywhere. This was confirmed when I asked a law student from this Galilaean village where he plans to be in five years. Without hesitation, he said, “Here, in my village, and not for the next five years, but for the next 10 and 20 and 100 years.”

After hours of deep discussion in that quiet Palestinian village, tucked away in the velvet-like green hills of the Galilee, a Palestinian researcher, who was quiet for most of the time, spoke in a calm, definitive voice. He said that everything we were discussing, in terms of how much harm Israel is doing to Palestinians living in Israel and under military occupation, is true, but in the village, the numbers speak volumes. Over the past 64 years, since Israel’s creation, and despite all of its attempts to force the Palestinians off the land, the population has increased as per official Israeli statistics.  As long as the Palestinians exist on this land, he asserted, their rights are bound to be realized.

All the way home, I could not get out of my mind a new political slogan that would reveal the extent of the Palestinian tragedy — The Galilee First. Instead of managing the conflict as if the only contentious issue is about those of us living under Israeli military occupation, the international community, and Palestinian leadership as well, should call for the world to witness the reality of Palestinians inside Israel. If Israel is bent on discriminating against one fifth of its own citizens, what should we expect of it in the occupied territories, areas that are not internationally recognized as Israel? Indeed, the next time I’m asked what I think the solution to this conflict is, my answer will be ready: Let’s start with full equal rights for Palestinians inside Israel. In other words, The Galilee First if Israel is serious about peace and truly desires historic reconciliation with the Palestinians.