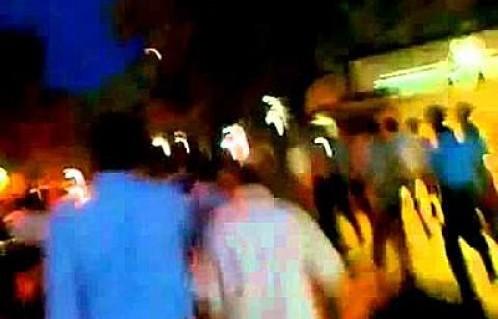 The first cracks in the Damascus bubble are starting to appear. Last night, shortly after the taraweeh prayer, I heard shouting from outside a mosque in Abu Roumaneh, one of the wealthiest districts in Damascus. Two opposing groups of men had faced off in the street. While initially the chants were pro-Assad, eventually the refrain made famous by hundreds of protests across the Arab world was heard: ‘Ash-sha’ab yureed isqaat an-nitham’. The people want the downfall of the regime. Having heard it so many times on BBC and al-Jazeera, the cry was both inspiring and frightening. It summons images of young Egyptians in Tahrir Square, Yemenis draped in bloodied keffiyehs and residents of Hama, fists defiantly punching the air. But in the heart of loyalist Damascus, it’s not something you expect to hear.

The noise quickly died and soon the few brave protestors had scattered, half walking, half running, all in different directions and blending into the street traffic.

I couldn’t quite believe what I had just witnessed but soon enough the shabeehahcame running, confirming the importance of the event. Carrying sticks and batons and dressed in mismatched uniforms they looked angry but luckily had arrived too late to catch any of the perpetrators. Instead, they stood in the road and held up the traffic. A few taxi drivers dared to honk their horns and eventually the gang turned around, contenting themselves by shouting the pro-regime cliché of  ‘Allah, Souriyeh, Basharu, bas’.

Unsurprisingly, the noise had attracted a lot of attention on an otherwise quiet Ramadan evening. Local residents had torn themselves away from their favourite soap series and were now standing on the balconies of the surrounding houses, like spectators in an amphitheatre.

As Ramadan progresses it’s likely that we will see more demonstrations in districts which, until now, had remained silent. Activists reported via Twitter that protests occurred around the same time in the commercial district of Salihiyah as well as embassy-filled Rowdah.

Last night’s protests were small and short-lived but their location, in the middle of wealthy, pro-regime Damascus, was certainly daring. A mere anomaly; or an indication of things to come?