‘Thanks for Meeting Malala. But What About Other ‘Malalas’?’ 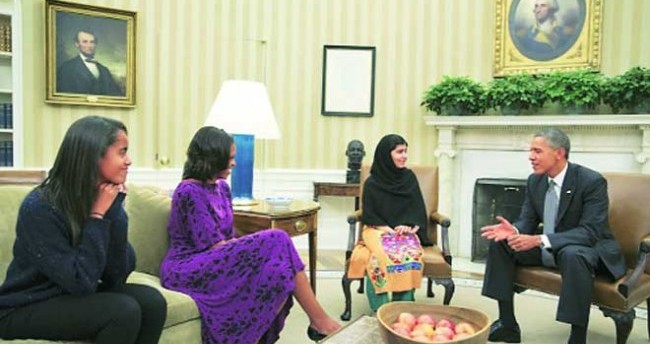 Thank you for your meeting with an impressive young lady from my country, and for showing concern over the citizens of Pakistan. In the picture from the White House, you are all smiling. This is almost heart-warming, and almost does not look like political point-scoring or a publicity ploy.

While the world celebrates this beautiful moment strategically captured by your photographer (who deserves a raise), I hope you will excuse me for not patting you on the back.

Since your country started the drone program in 2004, the Bureau of Investigative Journalism (TBIJ) estimates that as of August 1, 2012 between 482 and 849 civilians have been killed by drones in Pakistan. Many of these are children. That estimate represents the full range of civilian casualties credibly reported in reliable sources, some of which the TBIJ has corroborated with it’s in own field investigations in Pakistan. In fact, between 2006 and 2009 alone, a leaked document by the Pakistani government estimates 147 civilian deaths, 94 of which were children.

As you probably noticed, these numbers do not include those children who were injured.

A year ago on October 24th, two children—13-year-old Zubair and 9-year-old Nabila—were injured by a CIA drone strike. On October 26th of this year, these brave survivors are coming to DC to testify before Congress. Won’t you also invite them to the White House, Mr President? Won’t you smile for a photo with them? Won’t you tell them about the billions of American dollars spent on wars in Pakistan and Afghanistan? Perhaps many Pakistanis will not impressed be by your meeting with Malala. While you meet her to show support against Taliban bombing of schools in Pakistan, you have yet to stop bombing Pakistan itself.

Out of curiosity, what did you say to Malala when she “expressed my concerns that drone attacks are fueling terrorism. Innocent victims are killed in these acts, and they lead to resentment among the Pakistani people.”

I’m sure Zubair and Nabila will also express similar concerns.

Forgive me for being so naïve, but you don’t need a 16-year-old girl to tell you about the resentment caused by drone strikes. You already know what to do.