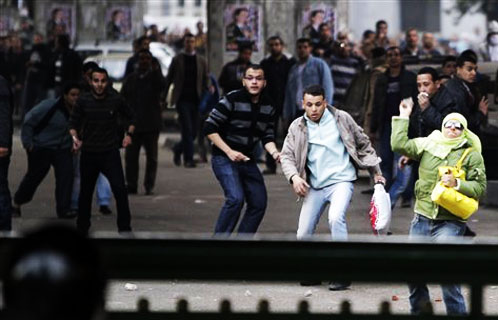 Today was the day everything changed for the peaceful patriots of Egypt. It was the saddest day of what was a peaceful revolution and has now been attacked with unspeakable violence by a regime that has had three decades to finesse it.

As I write this gun-shots ricochet across the Ground Zero of this yet unfinished revolution, Tahrir Square-gun shots originating from snipers hired by the dictator who just refuses to go. Its 5 am and two people have been killed in just an hour, some think the number is even higher. Fragments of very disturbing conversations today gave me the following quotes from friends who had been again granted mobile phone access:

My first conversation on the “restored”  internet happened with my friend Ibrahim who I have not been able to reach since all of this started. (This was at 8:48 am Eastern US time, Cairo is 7 hours ahead)-this was through Facebook chat. He had just returned to his apartment in Dokki.

Me: How are you? So worried. Glad we could finally get on!

I: I am so sad today…so depressed…They ruined our revolution…Egyptian state TV is disgusting

Me: I know—you back home? How unsafe outside? They have all kinds of killers on the loose now—paid upto 500 pounds apparently…

I: I was there all morning and jsut got home. It’s not safe there

Me: D told me that there were looters at your place in Dokki?

I: Looters ha! They were escaped prison inmates–they were close to my family’s place outside Cairo not mine…you know on the road to Alex—they did a citizen arrest 30 people and gave them to the army…

Me: So you are in the Dokki apt?

I: Yes I am here now…closer to Tahrir

Me: u think the revolution is over?

I: I don’t want to say that…he is sending people to kill people…We might have to do a strategic retreat for a few days but people will regroup and rise again

I know for sure he paid people 50 pounds to raise his banner.

I: Facebook for sure, especially in beginning…Twitter stopped for most anyway Tuesday…so it was not used that much

Me: Obviously its back now?

I: Now everything is back

Internet is back and I think they will try to use FB ad twitter to fight back. They know the rules of the game now…The majority in the country don’t use it ofcourse…and now everyone knows where to go…but the early days of revolution were started by group of young people who are very active on FB…but anyway even if some if started on FB…for most it was people mobilized by watching TV…they knew what was happening and participated…It did start on FB but then FB didn’t matter…after first day…after internet phones went down…it was people talking to neighbours and friends…It is a people revolution really…its about all of us…the momentum started and there was no holding back…

Me: What were chants today in Tahrir?

I: Our people said Down with Mubarak and Mubarak’s thugs said Yes Mubarak! I almost cried…Its like a war now…

Me: Will you go out?

I: Not today I think so no…Its all about Friday now…I know I will go out on Friday…Thanks Parvez

By 6 pm today—this revolution being broadcast live on Al-Jazeera, had shown us shocking and unprecedented scenes of thugs on horses with swords and whips lashing through the crowds. Molotov cocktails and Petrol Bombs were hurled at thousands of the revolutionaries by thugs hired by Hosni Mubarak—the going rate estimates on twitter chatter ranged from  a 100 Egyptian Pounds to 500 punds.

By 2 pm Eastern, friends were reporting that there were suspiscious new twitter accounts. I had no doubt that Mubarak’s parallel crackdown would be monitoring whatever little social networking was still going on (and today was a huge spike given the return of the Internet).

Hosni Mubarak is using techniques similar to what Ahmadinejad used in Iran in 2009 in what was mistakenly being called a Twitter revolution. The regime in Iran cracked down on Internet dissent and regime insiders had set up online alibi’s to monitor the social networking traffic. A terrible crackdown followed after that “revolution” failed.

I have been tweeting the following to the few that still tweet out of Cairo. Please re-tweet.

PLEASE BE CAREFUL if sending #tweets frm inside #Cairo. The Next #Mubarak crackdown might be on tweeps and FaceBook #Jan25

#Egypt Create alternative profiles please. Ahmadinejad did this in Tehran in 2009