Syrians Protest in Front of the Ministry of Interior 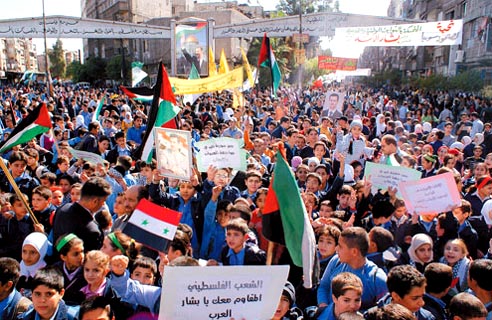 Egyptian writer Belal Fadl was right when he said yesterday on Twitter that no one can appreciate how brave those who participated in the protests across Syria are, save those who really know Syria.

With all my respect to the revolutions and uprisings in Tunisia , Egypt , Yemen, Bahrain and Libya, Syria has had previous experience of the regime cracking down on the people when Hafez Al Assad unleashed his air force on the Muslim brotherhood in Hama, killing thousands of civilians. It is no wonder that his son is helping Qaddafi.

The March 15 in Syria can be our January 25 , do not underestimate it. If our dear Syrian brothers and sisters manage to protest until Friday, till the Friday prayers, it will be a great triumph. Yesterday sources in Syria speak that not less 300 were arrested during and after the protests. 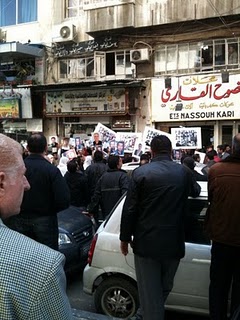 Despite these arrests the activists did not give up and decided to protest earlier today in front of the ministry of interior itself , yes the ministry of interior, demanding the release of the detainees – a very daring step. The families of the detainees joined them and that means we are speaking about old and young women and children. Here is the only photo I found.

Again, the brave protesters were chased, beaten and badly injured by the security forces including children and the elderly.  Some have been detained already. There are 36 detainees who were being identified. Here are their names in both Arabic and English.

One of them is a 10 years old child whose mother is a political detainee and another one is a pregnant lady who was released from a while ago because of her pregnancy.

Cameras and mobile phones were confiscated today. I do not know if the foreign media will be able to transfer what is going on now in Syria or not.

I do not know about other governorates in Syria other than Damascus but, according to some accounts, allegedly the army encircled certain areas in the north – in Kurdish areas. I would not be surprised if that were true.

For those who are praising Bashar Al Assad as the last knight of Pan Arabism , I would like to remind that he and allegedly Israel are helping Qaddafi in his war against his own people. Please read this post.

The Syrian activists are calling for a stand today at 8 PM in Damascus at Ummayyad Mosque. I received a tweet that there will be a protest in the morning too in another part of Damascus but I am not sure of the time .

God bless them, bless the Bahrainis , the Yemenis and the Libyans.