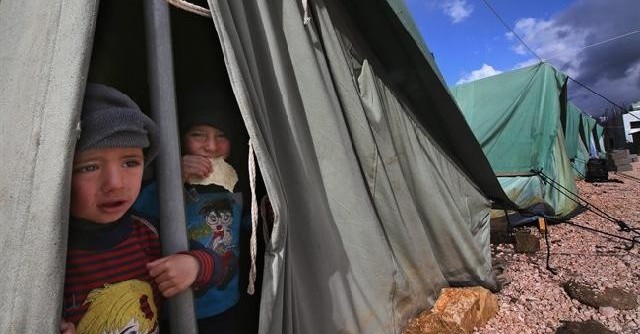 It is always a difficult choice in times of war: stay and die or flee and become a refugee – at times for life.

The revolution in Syria, now into its third year, has uprooted up to 1.5 million people and internally displaced another four million, making Syrians one of the largest urban-refugee populations in the world.

Mariam made this hard choice.

After losing her husband in the fighting, she was forced to flee, with her eight children in tow, the ceaseless government airstrikes on the Idlib area in northwestern Syria where they lived.

The nine crossed into Turkey on foot and had the good fortune of knocking at the door of a humble farmhouse sitting right on the Syrian-Turkish border.

Um Maher, the Turkish woman farm owner, took pity on them and offered them to stay in the only portion of space available in her livestock shed.

“We fled the airstrikes. We had no place to hide. We just left carrying nothing,” says Mariam.A three-minute video aired this week by Alarabiya TV shows Maktabi, a Lebanese media figure recognized for her coverage of the 2006 Lebanon war, visiting the tiny farmhouse. She gives the livestock shed the once-over, focusing on the section where the woman refugee from Idlib and her brood sleep, cook, eat, wash and bathe, before conversing with Mariam and her eldest son Khaled and with Um Maher.

“Who helps you now?” Maktabi wonders.

“When they give us something, we eat. Otherwise we don’t. God looks after us. What can we do?”“Here? Charitable people,” Mariam replies while her children jump all over her before she breaks into tears.

Though a shed, they have a “roof” over their head thanks to the big-hearted Um Maher, a Turk who speaks broken Arabic.

Maktabi asks Um Maher if she charges Mariam any rent.

“No, no. Look, they have nothing. How could I charge them rent?” she replies raising her hands and pointing at Mariam and her children. “They’re hungry, God help them! Are we expected to take their soul? They’re hungry. Look, they are all young…”

Um Maher’s shed, cow and chickens are all she owns.

“They feed us and we feed them,” he says, adding: “But I miss my country, my home, my school, my relatives and my people.”Mariam’s eldest son, Khaled, tends the cow and chickens with his sister in way of repaying Um Maher.

Um Maher’s welcome to Mariam’s refugee family is all the more touching because she is sharing the little she owns.Only when do-gooders bring her flour is Mariam able to bake bread in a primitive outdoors mud wood-burning oven.

Her kindness and generosity is also a testimony to how little help can save lives.