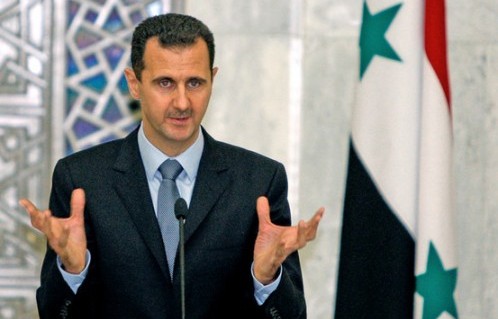 I did not realize that his orders were not being obeyed anymore.

US Envoy Philip Habib on hearing that a promise of a ceasefire obtained by Habib from Israeli Prime Minister Menachem Begin has been violated by Defense Minister Ariel Sharon, 1982.

Yesterday Syrian President Bashar al-Assad pledged through his spokeswoman, Bothaina Shaaban, that peaceful protests would not be put down with lethal force.  Today up to a dozen Syrians, perhaps 2 dozen, have been killed when security forces opened fire on demonstrators.  Which makes me wonder if President Bashar actually did give the order not to fire on protesters, if he meant it or if his power does not extend to the notoriously omnipotent and feared Syrian security services.

President Bashar has the dubious distinction of being the Arab world’s first dynastic president of a republic, taking over upon the death in 2000 of his father Hafez al-Assad.

I must admit that Bashar has many fans in Syria, viewed as the New Young Hope.  Unfortunately he has not lived up to that hope.  In his 11 years in power he has liberalized the economy and moved the country to a capitalist market system.

But Syria still languishes under an emergency law that dates back to 1963 that bans most forms of dissent and public expression.  That’s 48 years to you and me, half a century.  The best the President could offer yesterday was a promise to study repealing the emergency law.

The system in Syria is inherently corrupt and the terror spread by the security services among the population is well-documented.

President Bashar famously said back in January that Syria was stable and immune from the upheaval witnessed in Tunisia and Egypt, “Because you have to be very closely linked to the beliefs of the people. This is the core issue.”

Obviously Syria is witnessing violent upheaval despite the President’s convictions (?) and vehement denials of Elias Murad, President of the Syrian Journalists Union, who claimed tonight that the news is being fabricated and no one was killed today and the demonstrations taking place were in support of the president.

Syria, perhaps more so than any other Arab country except Egypt, is a crucial Arab state.  President Bashar is now faced with the most serious challenge to his rule in 11 years.  He will doubtless be closely watching the reaction of the mercantile Sunni class in Damascus.  Any widespread discontent in the Syrian capital will spell big trouble for the regime.

The New Young Hope still has a chance to recover the situation.  He should learn from the mistakes of Ben Ali, Mubarak Ali Saleh and Gaddafi; once the genie gets out of the bottle it is impossible to shove it back in, no matter how much firepower, repression and brutality are used.

His cultured wife Asma recently told Vogue magazine, “It’s about everyone taking shared responsibility in moving this country forward. … We all have a stake in this country; it will be what we make it.”

The people are calling for freedom, sadly Assad’s supporters are chanting a variation of the Colonel’s Unholy Trinity, “God, Bashar and Syria.”

I do not believe those claiming that the Syrian regime has brought in Hezbollah gunmen to quell the uprising.  While Syria does wage its battles in Lebanon and Palestine by proxy I am certain that it deals with its own problems on home turf.

Ultimately, Syrian blood is being spilled on Syrian soil and not for the liberation of the Golan.  It’s a country that holds so much promise and yet has underachieved for far too long.

Perhaps President Bashar has the time, will and the powers to enable him to guide Syria towards a more open and democratic system where his closest relatives no longer reek of corruption and have their fingers in every pie, where Syria is no longer a one-party state, where a 19-year-old blogger is no longer accused of being a woman of loose morals and an agent of the CIA, where citizens don’t whisper their discontent and look over their shoulders and where gunmen in civilian clothing act like God on Earth with the power to make people disappear into terrible dungeons and endure the most brutal of torture.

In Tunisia, Egypt, Yemen and Libya the leaders were always a step behind.  In Syria the writing is on the wall.  If not dealt with wisely the situation may turn out to be more terrible than the chaos of Yemen and Libya combined.