Syria: Carrots on the End of a Very Long Stick 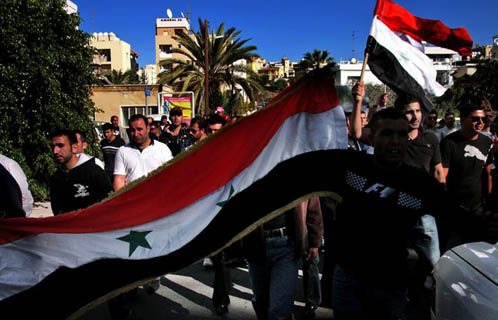 The regime in Damascus has responded to the unrest in the country by offering a large carrot and several medium-sized ones at the end of a very long stick.  The large carrot is the declaration that emergency law, in place for almost half a century, will be lifted.  The other carrots include granting more political and press freedoms.

I find a problem with this; the idiom carrot and stick deals with donkeys which are much abused and misunderstood animals in the Middle East.  But we are talking about human beings here.  The Syrians are a proud people with an old and glorious history demanding basic human rights of which they have been deprived for far too long.  What the Syrian government has announced is not a reward or concession to the people; it is an inherent right that has been withheld for decades by the Baathist regime through force, fear, repression and intimidation.

The regime has not even set a timetable for any of these reforms and it seems to be desperately shopping for time while trying to figure out what to do.  Time is exactly what US Secretary of State Hillary Clinton gifted Damascus on Sunday when she said that Syria is not Libya and the US is not contemplating intervention in Syria.  The message clearly is we’re going to stay out of your way and give you a chance to sort this out.  What was left unsaid, in my opinion, is that there’s a hidden invoice attached to this American position.  Significantly, the Gulf countries have expressed their support for the regime in Damascus and media, Arab and international, has dealt with events in Syria with a much lighter touch than the one used with Yemen, or Libya.  Of course American, and world, inaction on Syria is contingent upon the end of the lethal violence used to suppress the protests leaving dozens of Syrians dead and wounded.

I am not impressed with the demonstrations today held in several Syrian cities in support of the regime .  I’m not denying the fact that the regime has supporters; rather, it is always very easy in the Arab world to organize large scale pro-government and -leadership demonstrations.  Especially when you declare it a school holidayThese have been very well rehearsed and oft-repeated exercises in public adoration for leaders across the Arab world.  I had an uncle working in Kuwait when Iraq invaded and occupied the country.  One day the Iraqis decided to organize a demonstration in support of their annexation of Kuwait.  My uncle happened to be walking down a street where the march was taking place when he was grabbed by the “organizers” and told to march along and chant.  And sure enough, there he was later that evening making an appearance on Iraqi TV as part of the demonstration even though he despised what Saddam had done.

It’s to come out in significant numbers voicing opposition that takes a lot of doing in this region.

The Syrian regime has been quick to blame the upheaval on foreign elements, a plot, a conspiracy targeting the stability of Syria.  It’s a repeat of the accusations leveled by the regimes of Ben Ali, Mubarak, Gaddafi and Ali Abdullah Saleh.  Damascus has also raised the fearsome specter of sectarianism in the country.  Syria is ruled by the minority Alawites who first came to power with the ascent in 1966 of Salah Jadid as the strongman of the regime.

I find it heartening that there have been several marches and calls in the name of national unity, decrying all forms of sectarianism.  It would be naive and erroneous to claim that one particular sect is united in its support for or opposition to the regime.

While the Alawites do hold the reins of power in the country, they are backed by Sunnis.  I believe the history of Syria in the 20th Century should be viewed in terms of pre- and post-Hafez al-Assad and pre- and post-Hama.

The Hama massacre in 1982, which I referred to in previous posts, was an armed insurrection by the Muslim Brotherhood against the regime of Hafez al-Assad.  It was preceded for several years by a campaign of terror by the Brotherhood, including an assassination attempt on Assad himself, and met with equal brutality and suppression by the regime.  In early February 1982 the Muslim Brotherhood declared open jihad against the Baathist regime and took control of Hama.  What followed was a brutal fight to the death.  It ended with the regime crushing the rebellion, in the process claiming the lives of several thousand people, with the generally accepted figure ranging between 10,000 and 25,000 killed, mostly civilians.

That’s why it is important the coexistence proponents be given a platform by the media.  The struggle in Syria has never been sectarian; it’s always been a power struggle.  We should not forget that when Hafez al-Assad mounted his coup d’etat, aka Corrective Movement,  in 1970, he imprisoned regime strongman and Alawite compatriot Salah Jadid as well as the Sunni figurehead president Nureddin al-Atassi.  Jadid languished in jail for 23 years until he died there in 1993.  Atassi was released due to ill health in 1992 and died of cancer less than 2 months later.  The Alawites in Syria must not as a sect be held responsible for the sins of the regime or what happened in Hama.  They as a group have their own dissidents and critics of the regime, for example Aref Dalila.  They have contributed to the enrichment of Arab culture and literature with the creativity of people like the poet Adonis and the playwright Saadallah Wannous.

I hope that what is happening in Syria is an opportunity for the country to move forward and open up to the world.  Even if the protests do die down for the time being the regime should be under no illusion  that the storm has passed.  The desire for freedom is overwhelming and irrepressible.

President Bashar is faced with some very tough choices now.  The resignation of the government, in my opinion, is not a deal clincher.  The issue is changing the nature of the regime.  Can it change?

This is a matter for the Syrian people to decide.  We observers and commentators can write and offer our opinions.  But what I really wish for, is that Syria and the other Arab countries can offer their people a dignified existence with all the accompanying freedoms.  The dignity of standing alone, being the symbol of resistance to foreign plots and enemies, that only get you so far.  It does not put food on the table, build a progressive educational system, erect proper infrastructure, encourage first-class healthcare…

In 1983 an 18-year-old student by the name of Kefah Mokbel achieved a 100% score on the Syrian Baccalaureate exam, a first in the history of Syria.  He was personally congratulated by President Hafez al-Assad.  Today he is one of the world’s top breast cancer surgeons.  Unfortunately he is based in London, not Damascus.  When Foreign Minister (now Vice-President) Farouk al-Sharaa underwent open heart surgery it was performed in Beirut, not Syria.

Egypt can claim Farouk Baz and Ahmed Zuweil as eminent Egyptians who emigrated and never returned.  Every Arab country has similar success stories of citizens who rose to prominence and were truly valued abroad.  The reason is about more than academics.  It is about an atmosphere that holds freedoms sacred, encourages creativity and rewards pioneers in various fields.  Secularism is not tantamount to heresy and does not aim to eradicate faith, women’s rights do not lead to loose morals, personal liberties are not an affront to unity, individualism does not negate social cohesion, opposition does not imply treason and realism does not equate defeatism.

It is up to the Arab world to decide if the revolt taking shape within its borders has a place for such convictions.  Syria is not the first country nor will it be the last in this chain of tumultuous events.  The late President Hafez al-Assad coined the phrase, “Peace of the Brave”.  I hope the Arab leaders are  brave enough to make peace with their societies; shooting at them does not take much courage.  The loyalty and devotion of the people out of conviction will make for a much stronger and more united home front than the one that has suffered defeat after defeat for decades, even centuries.