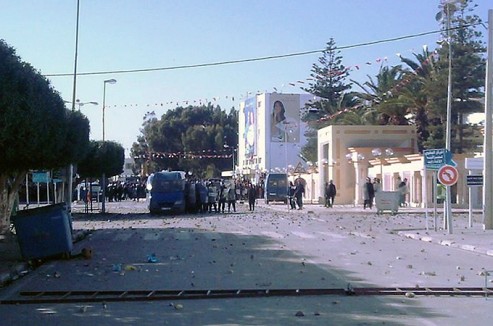 Important protests are taking place in Sidi Bouzid, Tunisia (as well as the surrounding areas). An unemployed 26-year old man committed suicide sparking mass demonstrations by young people and other residents over unemployment and their quality of life.

Police have attempted to block media coverage of the riots (and that the rioting is isolated and being exaggerated by the opposition), but bloggers and activists have posted pictures and video of the disturbances on the Internet. A mathematics teacher died (shot by police) today and others have been severely beaten and tortured.

Lina Ben M’henni summarizes the background of Mohamed Bouazizi who had graduated with Mahdia University a few years ago, but could not find a job. Being the only breadwinner in his family, he decided to earn a living and with his family’s help, he started selling fruit and vegetable from a street stall. His venture gave him very little, enough to guarantee the dignity of his family. But city hall officials were on the look out, and have seized his goods several times. He tried to explain to them that what he was doing was not his choice that he was just trying to survive. Each time, his goods were confiscated, he was also insulted and asked to leave the city hall premises. The last time this happened, Mohamed lost all hope in this life and decided to leave it forever. He poured gasoline on himself and set himself on fire.

Riots are extremely rare for Tunisia, which has been run for 23 years by President Zine al-Abidine Ben Ali and works closely with Western governments to combat al Qaeda militants.

It deserves mention that Tunisia, often cited as one of the most prosperous and “open” economies and societies in Africa and the Arab world, is also one of the most efficiently run police states on the Mediterranean basin (Issandr el-Amrani once described it as a country run by the police and for the police, or something like that). But Tunisians are generally well educated, industrious if relatively mild mannered; they suffer the same stereotype that is often applied to Egyptians in regard to political passivity. Tunisia’s government mixes clientelism with swift repression and the finest Euro-American public relations consultancies (and they have Christopher Hitchens and many in the French media on their side, too) to keep tight control over political life and to project an image of pacific moderation overseas. (And their friends on the Internet are expert at lashing out at critics, as noted regarding the comments this recent Economist piece.) While the country has achieved remarkable success in the economic and social spheres, Ben Ali’s family has tight control over key sectors in the domestic economy and in recent years many progressive social policies (particularly with regard to gender) have been scaled to account for religious trends. While economic growth has been strong, social tensions brought on by unemployment have grown more intense in recent years. Many young people, as in the rest of the Arab world, suffer chronic unemployment and humiliation from often predatory state authorities.

Still, the regime operates on a bargain where, as one Tunisian put it to this blogger not long ago, “you can do anything — partying, drinking, sex, drugs, make a little business, whatever — but you cannot do anything near politics. Never.” This is not much different from many of the other “moderate,” pro-western Arab regimes although because of Tunisia’s lower profile and unique political background (coming from Bourguiba) the government’s abuses get less attention in the Anglophone media.

But censorship remains systemic and dissent is not tolerated. Do follow the links to the Tunisian sites following and reporting on the riots and protests. These are important, even if Tunisia is small and politically unimportant in the big picture, because they represent a push against some of the dominant narratives about Tunisia and its political culture and regime. It is important to understand the people involved and what their aspirations and objectives are; especially as the country looks set for succession in the next five or so years. Also follow @ifikra, @Astrubaal, @benmhennilina and @nawat on Twitter for updates.