Semites Unite! You’ve Nothing to Lose but Conflict 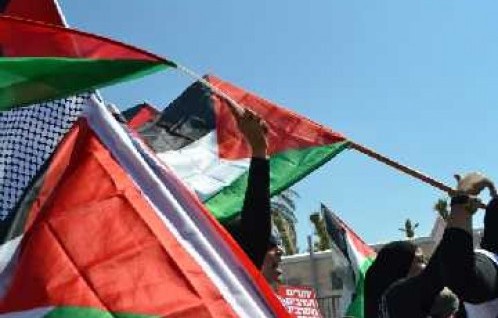 On 15 July a small bit of history was made in Jerusalem. Around 3,000 Jews and Arabs marched together from the Jaffa Gate in the Old City to the Sheikh Jarrah neighbourhood in East Jerusalem calling for Palestinian independence, freedom and dignity. The demonstration was organised by the Sheikh Jarrah Solidarity Movement and leaders of the Palestinian East Jerusalem neighbourhood committees.

We, an Israeli from Tel Aviv and a Palestinian resident of Jerusalem, were among those who joined and made our presence felt and voices heard.

Our reasons for joining were many. First, we believe that an alliance between Israeli and Palestinian activists is an essential condition for transforming this conflict. We should move away from Israeli versus Palestinian to those who are pro-solution versus those who are pro-conflict. It doesn’t matter if you are Jewish, Muslim or Christian; what matters is what you stand for.

Second, we wanted to see what Israeli-Palestinian hope looks like in 2011. So many people in Israel-Palestine seem to feel hopeless about the possibility of a meaningful exchange with one another. Such helplessness is easy to get sucked into. Instead, we wanted to be in the contagious company of people who believe they can make a difference.

Third, we both felt that a joint Jewish-Arab demonstration for peace and justice in Jerusalem would give us the opportunity, if we may paraphrase Rabbi Abraham Joshua Heschel, to pray with our feet.

Finally, even though the march was ostensibly about Palestinian independence, recent anti-democratic legislation in Israel (such as the anti-boycott legislation which outlaws calls for boycotts against the State of Israel, including settlements in the West Bank), gave us additional motivation to join and shout: “Not in our name!”

As for the actual demonstration, there were many things to take heart in. Palestinians who came played a leadership role in organising the demonstration and were not just followers as in past events, which had been led predominantly by Israeli activists.

People held signs which read, “Bibi, recognize Palestine”, and “[19]67 lines – a Palestinian State Alongside a Jewish State”. They chanted slogans in Hebrew, Arabic and English, such as, “From Sheikh Jarrah to Bil’in, Palestine will be liberated” and “Jews and Arabs refuse to be enemies”.

Around 3,000 protestors may not seem much, especially in comparison to the great Peace Now demonstrations of the past, but taking into account that Jerusalem is a very right-wing city and that the weather was extremely hot, a few thousand Jews and Palestinians standing shoulder to shoulder, united in a call for freedom and dignity for the Palestinian people, was an impressive sight.

Of course not everything was ideal. There were many more Jews than Palestinians. This may have to do with the fact that there are many Palestinians who are not thrilled about dividing Jerusalem (and falling under Palestinian Authority rule), or have given up on the two-state formula. But there are other reasons as well: fluctuating levels of trust between Jewish and Palestinian activists, the Palestinian taboo against working with Israeli activists and fear of reprisals from the Israeli authorities.

Another difficulty for us as peacemakers were the “talking points” during the demonstration, exemplified by one of the most visible signs that read, “Only Free People Can Negotiate”. This is a quote from former South Africa President Nelson Mandela that, in the context of Israel-Palestine, suggests that as long as Israel is an occupying force there can be no negotiation between the two entities.

While we are both sympathetic to this position, we find the idea problematic that one side is free and the other is imprisoned. Years of terrorism and occupation have made Israelis emotional slaves to an intractable conflict. Moreover, Palestinians are not just passive prisoners in an Israeli jail; they are also active agents with a say in their own fate. We need to remember that it’s leverage, and not freedom, that matters in negotiations. Though the Israeli-Palestinian conflict is asymmetrical in a way that favours Israel, the Palestinians – who ultimately hold the key to Israel’s legitimacy – are far from being without leverage, as the leadership’s decision to go to the UN in September to seek recognition of a Palestinian state so perfectly demonstrates.

At the end of the march, as people began to scatter, we were both left wondering whether this was the beginning of a new chapter of Jewish-Arab cooperation. The answer of course depends on the direction both societies are heading. But this we know: if a genuine movement for peace is to take root in this land, it must be done through Semitic unity. Friday, 15 July was a good start.

Roi Ben-Yehuda is a graduate student at both Columbia University and George Mason University. Aziz Abu Sarah is Co-Executive Director of the Center for World Religions, Diplomacy and Conflict Resolution at George Mason University, and a winner of the Eliav-Sartawi Award for Common Ground Journalism. He blogs at azizabusarah.wordpress.com